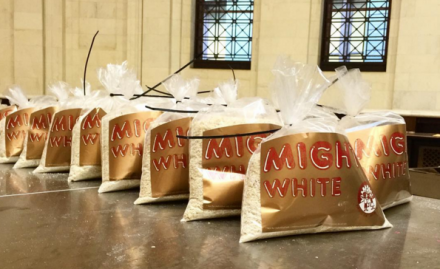 Continuing his process of intricate, labor-intensive installations and performances, Oscar Murillo has set up shop at the Alexander Hamilton Custom House on Bowling Green, bringing his new work, Lucky Dip.  The performance, which places a series of laborers at the service of his own aesthetic and political interests, sees the artist reprising his interests in national identity, globalized labor and their exchange with the world of contemporary art. 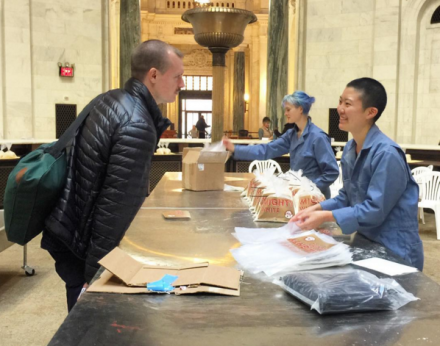 Mere feet from the southernmost tip of Manhattan, the Hamilton Custom House for years served as a commercial point of entry to the United States, and was the seat of the first federal agency established by a fledging United States in 1789.  From this point, taxes on imported and exported goods were paid, and the city’s ports, where countless goods changed hands, were serviced and maintained, effectively becoming a major seat of the young nation’s quickly growing economic clout and international interests.  By his selection, Murillo offers an intriguing turn, filling the antiquated spaces of the historical site with an elaborate corn processing site, a good that factors heavily in the narrative of American economics, particularly in its context as a good of the “New World,” taken from native peoples and sold internationally, a generative seed of exploitative labor in the nation. 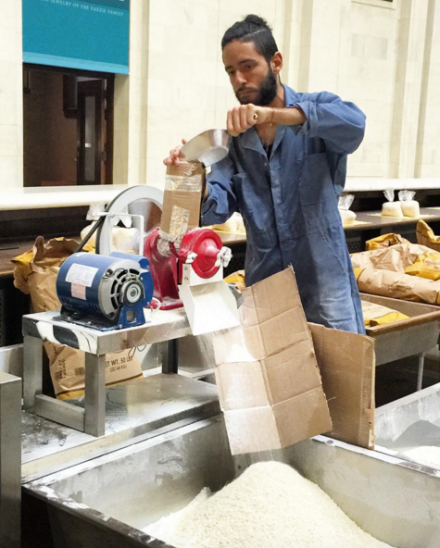 Here, Murillo employs a series of assistants to grind corn and package it, soundtracked by the faint tones of a balladeer on the steps of the building.  Packaged as “Mighty White” corn (a not-so-subversive nod to the history of corn and trade in the Americas, not to mention its context produced in New York City), Murillo’s work here renders the hard labor and efforts of workers in corn production visible, bringing the wage-labor involved in the creation and dissemination of global foodstuffs directly before the visitor.  Placing the intensive operations of performed manual labor at the footsteps of the American economic empire, the artist’s work is a strong follow-up to his similar work at David Zwirner last year, albeit considerably more biting in tone and execution.

The show will continue to run through the 22nd. 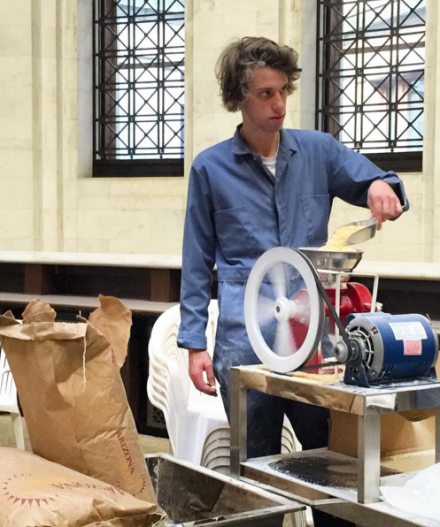 This entry was posted on Sunday, November 22nd, 2015 at 12:00 am and is filed under Art News, Featured Post, Show. You can follow any responses to this entry through the RSS 2.0 feed. You can leave a response, or trackback from your own site.