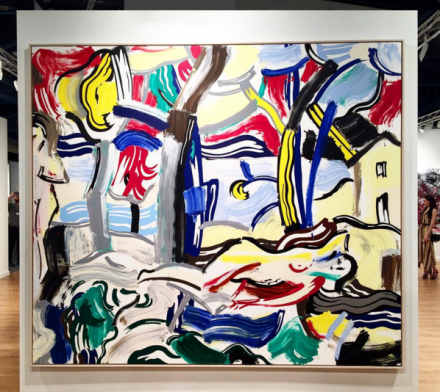 The doors opened this morning on the 14th edition of Art Basel Miami Beach, as the VIP Preview saw collectors, dealers and artists flocking to the Miami Beach Convention Center for another year. The fair, which this year boasts a sizable 267 exhibitors spread across the Convention Center’s sprawling floor plan, saw strong early attendance, and sightings of Eli Broad and Melissa Chiu wandering the fair in the early hours, while advisors and consultants sped past, locked in negotiations. 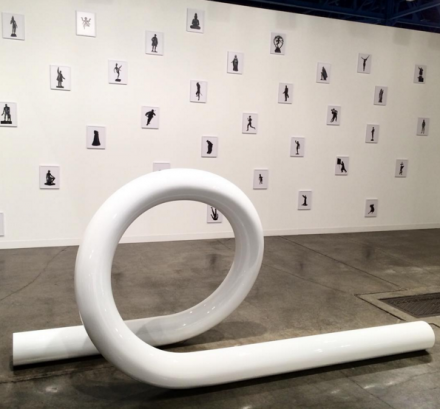 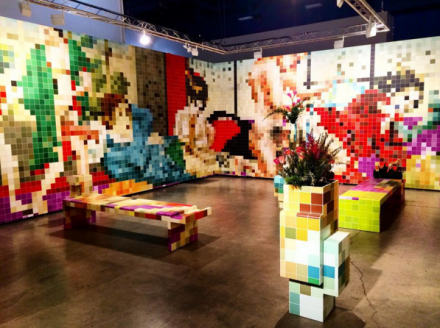 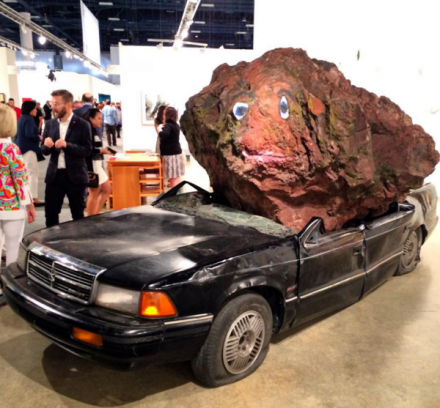 Skarstedt Gallery had scooped up prime real estate near the entrance to the fair, and was showing a broad selection of pieces, including paintings by David Salle and Albert Oehlen, as well as a burnt-orange Mike Kelley tapestry.  Close by, Peter Freeman had one of the more eye-catchingly peculiar sculptures in the fair, Jimmie Durham’s Still Life with Xitle and Spirit, which placed a massive volcanic rock (with a cartoonish face painted on its surface) atop a crushed sedan, commanding attention from attendees, who frequently stopped to photograph themselves with the comically disastrous scene.  In another corner, Hauser and Wirth was showing a series of works by Philip Guston, including a pristine 1969 canvas that sold for $300,000.  At White Cube, the gallery had brought a massive Damien Hirst formaldehyde, which placed a single dove, wings spread, in suspension.  Gagosian also brought a strong booth, including a number of loosely-executed Roy Lichtensteins that made it an early destination for eager collectors.  Pace Gallery also set an impressive tally, moving 16 Louise Nevelson works in the fair’s opening hours, priced from $75,000 to $1 million, on top of strong sales for Maya Lin and Agnes Martin. 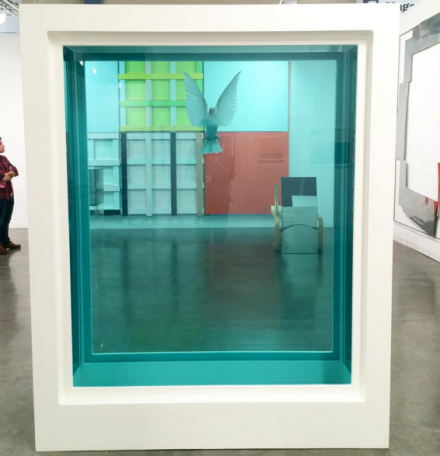 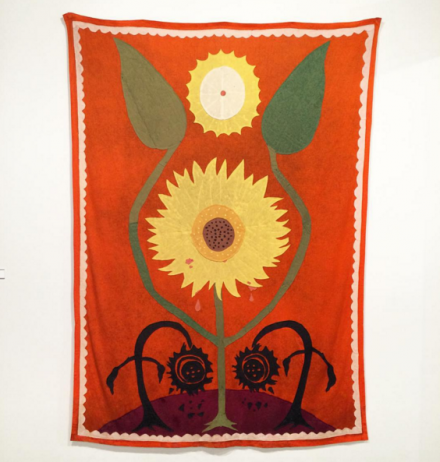 Sao Paolo’s DAN Gallery had one of the more interesting curated booths in show, installing a series of paper works by Mira Schendel, including a hanging sculpture covered with the artist’s graffiti-influenced scrawl.  Also of note was New York space P.P.O.W., which brought a vibrant selection of works from Martin Wong and David Wojnarowicz, a potent show of pieces that brought a powerful voice from New York’s vibrant 1980’s scene to the fair’s proceedings.  At the the Marianne Boesky booth, the gallery had installed a pair of towering Frank Stella works, taking advantage of the artist’s Whitney Retrospective currently on view in New York.  Sean Kelly was on-hand, selling out its selection of works by Los Carpinteros in the first day.  At Lehmann Maupin, the gallery also sold well, with one of Teresita Fernández’s recent Vinales works selling for $300,000. 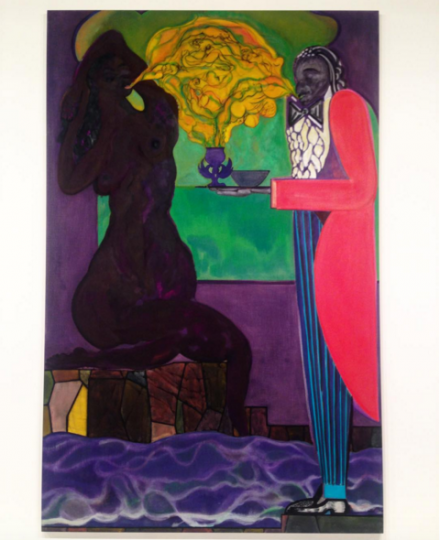 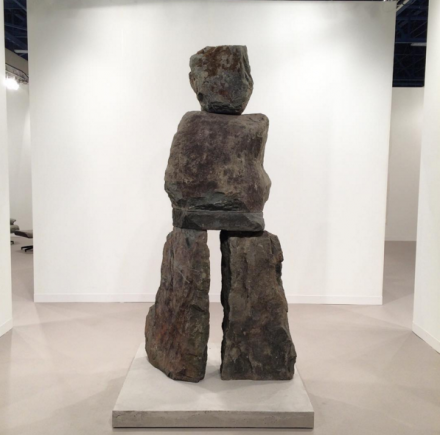 At the Nova section, a series of imaginative booths from LES galleries commanded strong attention.  Cameron Rowland, whose stark, politically tense pieces conjure conflations of the mass systems of capital flow and the subtle structures of power that they often create were a highlight of MoMA PS1’s Greater New York show earlier this fall, was showing a new series of pieces at Essex Street.  The works, combining simple appropriated documents and massive steel cables, also carried a sharp critical bent.  Nearby, fellow LES mainstay 47 Canal was showing a series of works from Antoine Catala, including a strange, inflating and deflating sculpture, placed on a curved tabletop.  Across the aisle, Ramiken Crucible’s exhibition of works by Lucas Blalock applied the artist’s techniques towards an full-booth install, where prismatic sculptures sat in chairs, seemingly viewing the large photographs of hot dogs on each wall. 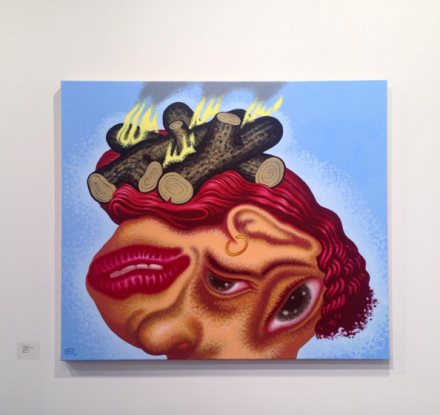 Over in the fair’s Positions section, the fair took a more enigmatic turn, with a series of pieces taking more unique interpretations into installation, design and sculpture.  Daniel Keller’s installation at Kraupa-Tuskany Zeidler, for instance, combined the artist’s cut rubber material and a series of piping structures, creating full-wall systems playing on infrastructural thematics and interwoven prehistorical signifiers in tandem.  Several booths away, New York/Berlin gallery Matthew was showing a series of hefty, cut-steel frames by the Villa Design Group`, glowing with neon and emblazoned with images of espresso cups and names like “Dahmer,” creating strange, occasionally disturbing combinations.  In another corner, Beijing’s White Space Gallery was showing a series of slight works by He Xiangyu, including a version of the artist’s work Wisdom Teeth, as well as other opaque wall-mounted works. 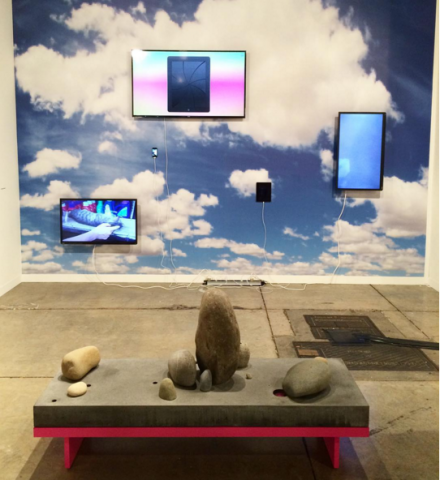 A Florian Meisenberg Installation at Wentrup 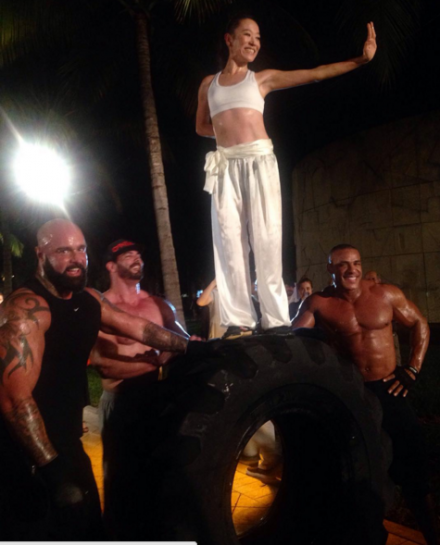 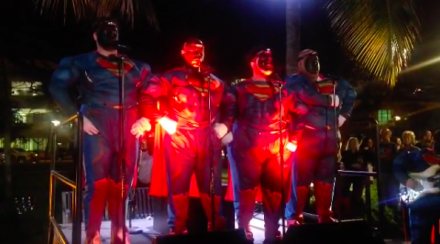 This evening, the fair’s Public section also opened, featuring a series of performances and activated installations that breathed a second life into the sculpture park just outside the Bass Museum.  Topping the exhibition was Xavier Cha’s Supreme Ultimate Exercise, which placed a Tai Chi master performing focused, controlled movements throughout the fair as a set of muscular men hammered on tires nearby.  In another performance, William Pope L. presented one of his superman-themed works, showing a quartet of blackfire supermen singing “America the Beautiful,” an ominous piece that felt equally comical and dark in the face of the country’s racial tensions and bursts of violence.

The fair opens to the public tomorrow, and remains open through December 6th. 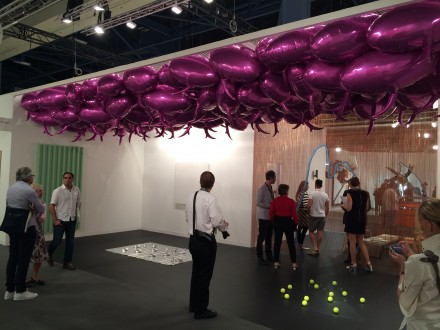 A vibrant installation of works at Esther Schipper Gallery 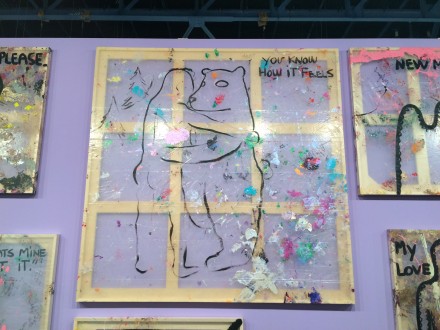 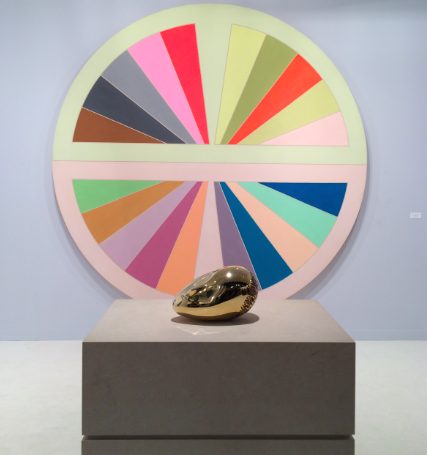 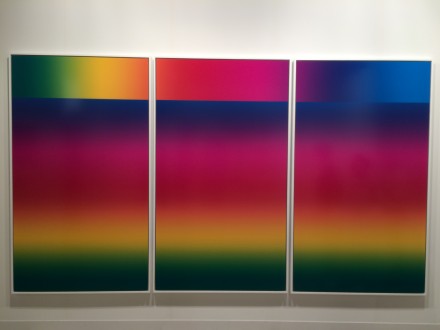 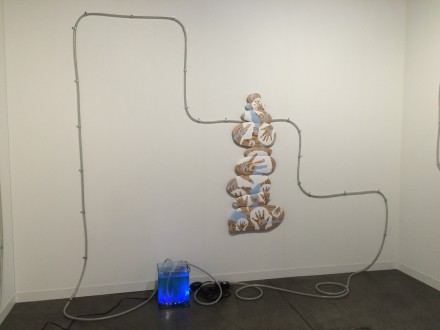 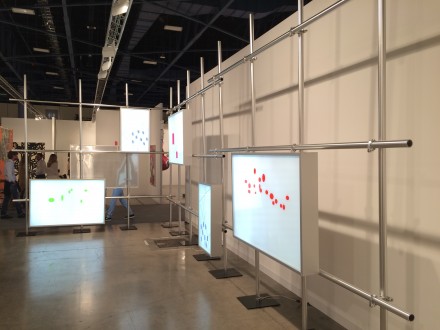 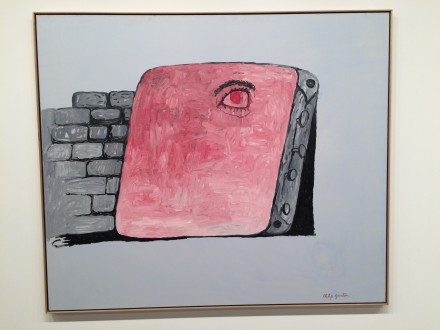 Philip Guston at Hauser and Wirth 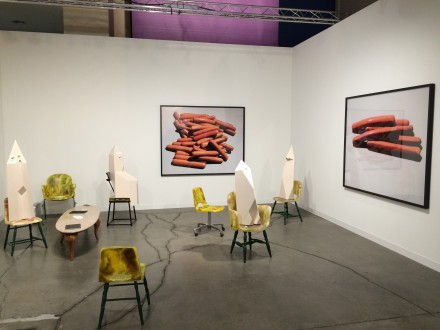 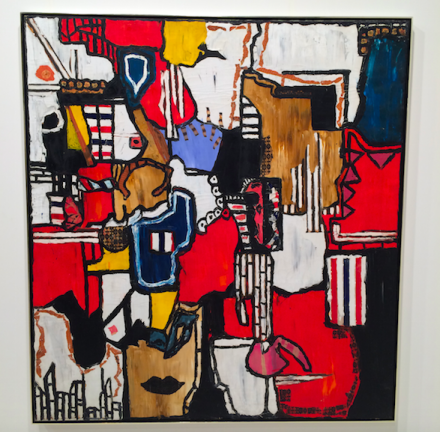 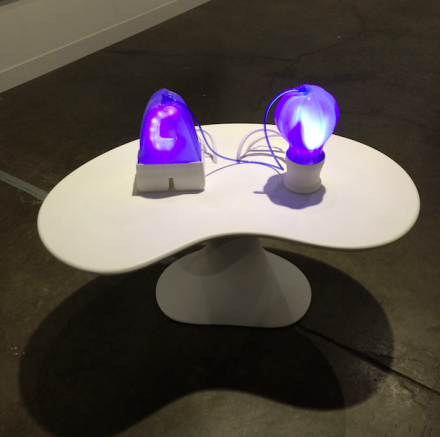 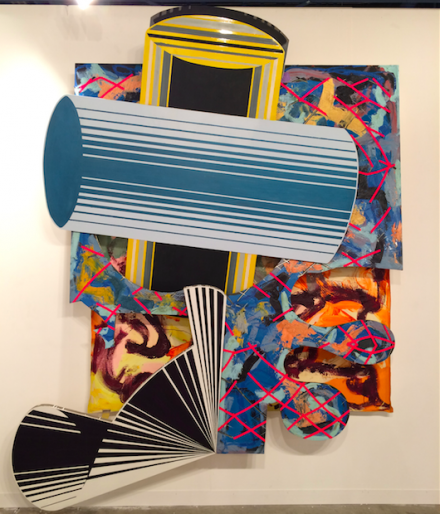 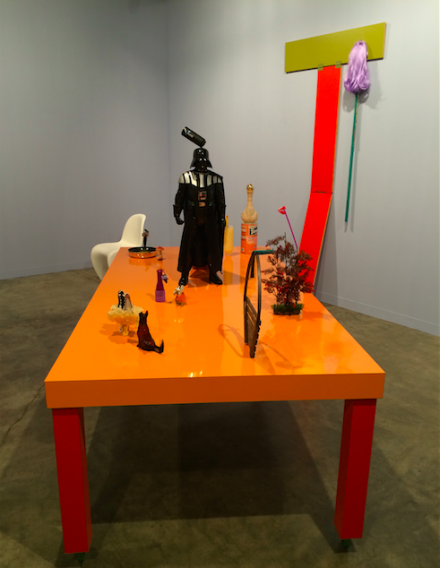 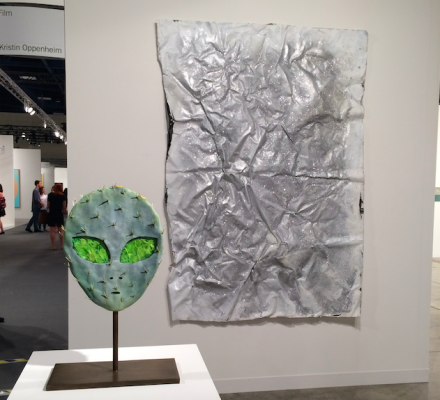 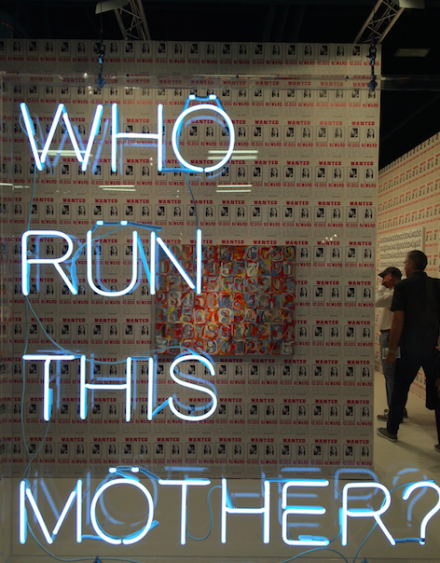 This entry was posted on Thursday, December 3rd, 2015 at 12:31 am and is filed under AO On Site, Art News, Featured Post, Show. You can follow any responses to this entry through the RSS 2.0 feed. You can leave a response, or trackback from your own site.