Anish Kapoor & 17th century Dutch master Rembrandt van Rijn are placed into a neighborly conversation at the Rijksmuseum this month, as dualisms of flesh and meat, figuration and abstraction underscore the more nuanced connections between the pair, and illustrate the ever-changing focal points, yet unified interests in the shapes and forms of the human body and its depiction.

Just as Rembrandt’s work continues to be a source of admiration for Kapoor, the British artist’s own work never lacks in terms of its awe-inspiring scale and ambition, nor does it hold back in its investigations of the more visceral depictions of the human anatomy.  One need only recall his 2013 work Disrobe, or the 2008 resin sculpture Blood Stick, or even the 2008/2009 Shooting into the Corner (a nine-foot cannon sending a 40-pound blood-red wax blob shooting into a corner), otherwise described as “a giant gunshot wound.”  Increasingly confrontational, in this instance Kapoor presents Internal Object in Three Parts (2013-2015), three painted reliefs crafted from layers of red and white resin and silicone, simulating the appearance of muscular chunks of raw meat. 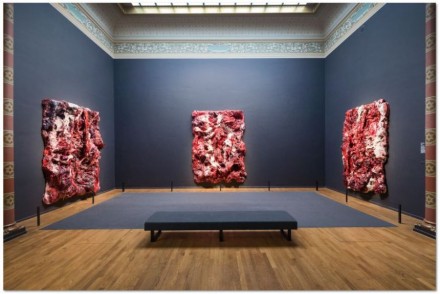 These works are placed in a dialogue with Rembrandt’s late works such as The Jewish Bride, The Syndics, Titus Dressed as a Monk and Self-Portrait as the Apostle Paul, making aesthetic and thematic links apparent in consideration of their historical lineage: from Rembrandt’s allegory of crucifixion in the Slaughtered Ox, to Soutine’s vivid still-life Carcass of Beef, to Bacon’s Figure with Meat, and on to Kapoor’s externalized human interiors, each artist in turn partakes in both the sacred and profane bodily forms of their respective epochs. Notions of mortality, hysteria, trauma, sacrifice, spirituality and violence are common threads, but presented without this chronological arc, the immediate contrast between Kapoor’s intensity and the subtle decorum of Rembrandt’s portraiture also encourages the viewer to look for the visually sensuous in the present, as much as it may have been praised in the past.  Just as Soutine would repeatedly pour blood over his carcass muse to ensure it maintained the bright color of freshly cut beef, Kapoor uses challenging materials like silicone to create dimensional layers where darker, deeper recesses of space and intense color emerges. 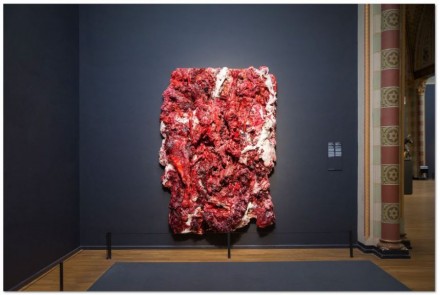 Kapoor refers to his interests in mythology for these works, specifically the Greek legend of the satyr Marsyas, who challenged Apollo, the god of music, to a musical duel, which Marsyas lost.  Apollo then tied Marsyas to a tree and skinned him alive. Whether Kapoor was also reading Deleuze’s The Logic of Sense and “the body without organs” at some point, one can only speculate, the emancipation from narrative with this piece, and Kapoor’s desire to get closer to the bone of experience through to the human psyche, seems distinctly relevant.  “I’m looking for a condition of a thing, rather than an expression of a moment,” Kapoor has said, tellingly.

Western culture seems to be gradually coming to perceive meat with disdain, yet during earlier eras meat was a luxury, and so represented hunger and scarcity. By contrast, today one easily associates meat with excess and repulsion.  Even so, these works are more opulent and theatrical than they are horrifying – and equally symbolic of pulsating life as they carry the implications of violence and death.  Kapoor does express humility with regard to whether his work will withstand the test of time, in contrast with those of his co-exhibitor: “Rembrandt’s works of art have been there for four centuries, mine just came into existence. They still have to prove themselves.”

Even so, Kapoor’s move away from the spectacle of his mirrored works, moving closer to the body itself, feels like a step in the right direction. 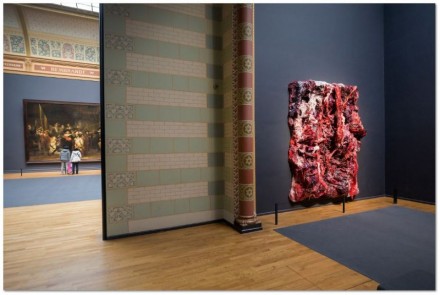 This entry was posted on Sunday, January 10th, 2016 at 12:00 am and is filed under Art News, Featured Post, Show. You can follow any responses to this entry through the RSS 2.0 feed. You can leave a response, or trackback from your own site.