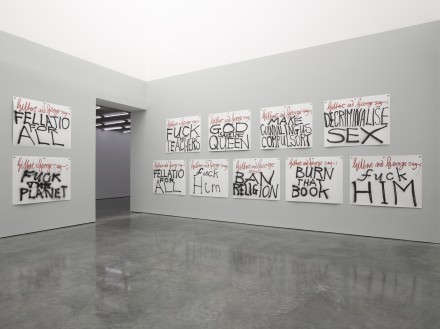 THE BANNERS is the title of Gilbert & George’s ongoing exhibition at White Cube’s Bermondsey location, following the eminent duo’s larger scale installment Scapegoating Pictures for London in 2014. Resuming their sturdily rebellious stand against anything corporate or organizational, this current exhibition, akin to their previous one, appropriates the vocal language of political outrage and public protests that have been normalized and spread widely by the media.  As its self-explanatory title dictates, the exhibition includes thirty banners bearing ten different slogans and each repeating on three different white papers. 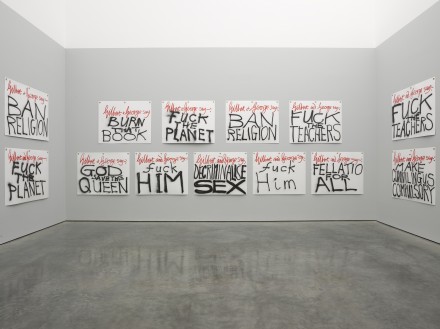 Adopting controversy as a vessel for artistic creation rather than a distinct series of consequences, the artists have been dedicated to scrutinizing the British ideology and its elitist, exclusive foundations since they united in the 1960’s, during their student years at Saint Martin’s School of Art.  Their “Art for All” motto and consequent borrowing of the term “living sculptures” to define their lifestyle, which is imbued with art in its every aspect, granted the duo a unique place in the contemporary art discourse. 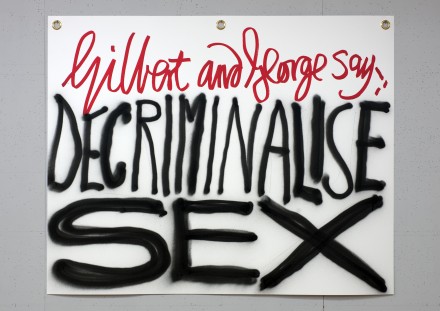 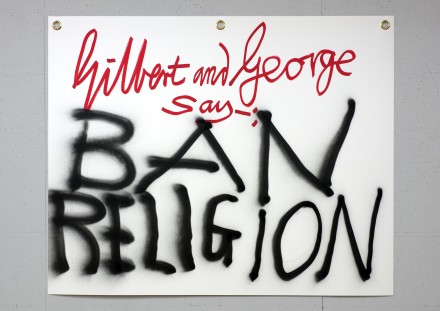 Self-reference and the omnipresence of their artistic identity have always been important components of their practice.  True to form, their signature suited garb and visages are often incorporated into their works, or are placed alongside the various relevant or arbitrary elements of each piece. In this piece, the artists are notably less absent, with the exception of the line “Gilbert & George Say” that precludes each slogan in red paint, reassuring their authorship of any idea declared within the exhibition, and returning what could be considered relatively divergent pieces to the more familiar territory of their corpus. 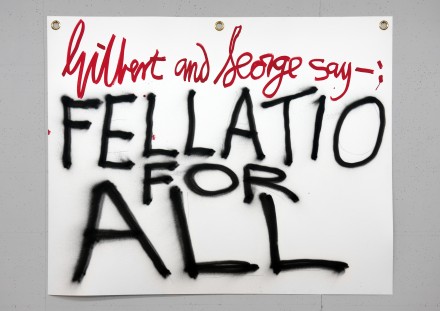 While most of the expressions come out as anticipated, such as BAN RELIGION or DECRIMINALISE SEX, some, such as GOD SAVE THE QUEEN or FUCK THE PLANET require further comprehension of the artist’s longstanding political views and occasional tongue-in-cheek commentary, which often conflict with the leftist and anti-monarchist stand common within the arts community.

Gilbert & George: THE BANNERS is on view at White Cube through January 24, 2016. 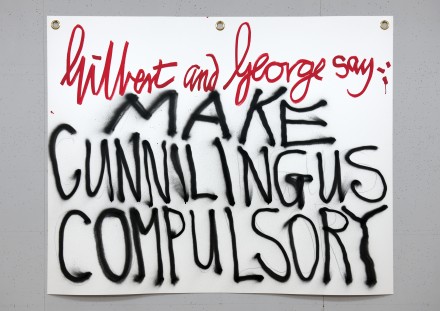 This entry was posted on Wednesday, January 13th, 2016 at 11:59 pm and is filed under Art News, Featured Post, Show. You can follow any responses to this entry through the RSS 2.0 feed. You can leave a response, or trackback from your own site.