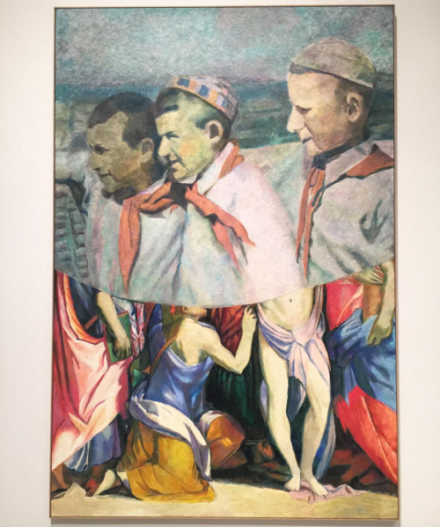 Delving into fragmented, often confounding representations of history and identity, Ilya and Emilia Kabakov have brought a new body of works to Pace Gallery in New York City, continuing the couple’s unique vision in representing and reinterpreting their past in Russia and their challenging figurative work which ties into dualities and pluralized senses of time and space. 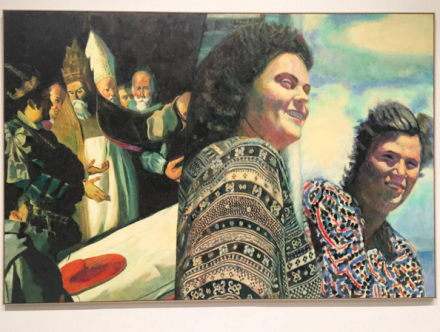 The works here continue the Kabakov’s practice of splicing and manipulating completed paintings, executing works that seem fashioned together haphazardly from disparate art historical and cultural threads, yet are painted in the distinctive hand of the artist’s, ultimately playing on the visually disjunctive arrangements through an emphasis on technical cohesion.  What results is a confounding mixture of timeframes and signifiers, amplified here through the recurring use of deep classical references in conjunction with memories of Soviet Russia.  Smiling bureaucrats are played against classical landscapes, while in others the dynamic poses of historical figures play off the beaming countenances of Soviet children.  With narratives obscured from an easy interpretation, the works become something of an echo chamber for the Russian identity, fluid in their linkages between shared cultural iconography, distant memory, and the spaces that remain absent between the two. 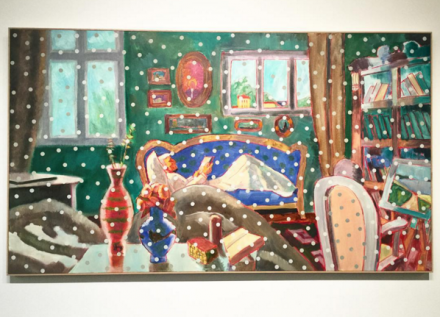 Ilya and Emilia Kabakov, The Six Paintings about the Temporary Loss of Eyesight (In the Room) (2015), via Rae Wang for Art Observed

Accompanying these works is a series titled Six Paintings about the Temporary Loss of Eye Sight, taking similar angles on the constructions of memory and history.  Here, similar domestic and pastoral scenes are in turn disrupted by stark fields of dots, spread across the surface of each composition.  The flurry of marks are quite visceral in their disruption of each canvas’s subject, creating dissonances in immediate recognition and viewing that often encourage multiple viewing perspectives and a studious eye from the viewer. 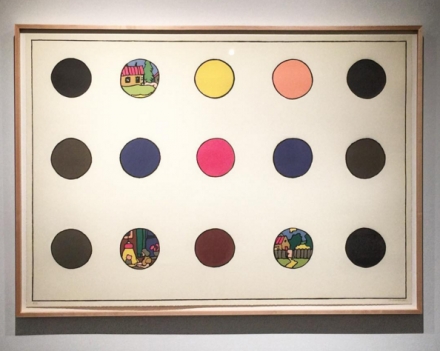 Ilya and Emilia Kabakov, Print with Dots #2 (2015), via Rae Wang for Art Observed

The ties between the two works are notable, reflecting a move in two separate directions in pursuit of a similar aim.  Rather than rely on the critical potential of the painted work as the actant on the viewer, the Kabakov’s enact both semiotic and structural interruptions here, each invested in turn with the disruptive potential for painting in exchange with memory, the selection of subjects, and time.  While the first series of works explore the space between images, the unspoken themes and interpretive capacities the viewer brings to these subdued, intangible compositions, the Temporary Loss of Eye Sight pieces apply a more immediate structural friction, one that relies expressly on the viewer’s attempt at recognizing the scene as such.  In each, the viewer is set free in a space of indeterminacy, contending with the flawed, unstable image as a record of time and place.

The exhibition closes on January 23rd. 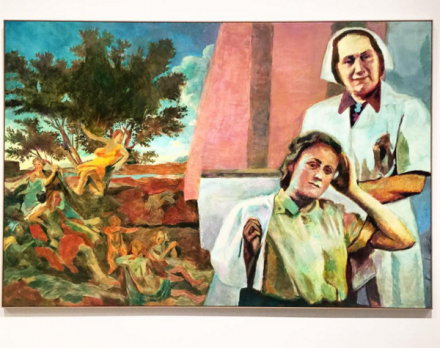 This entry was posted on Friday, January 8th, 2016 at 12:00 am and is filed under Art News, Featured Post, Show. You can follow any responses to this entry through the RSS 2.0 feed. You can leave a response, or trackback from your own site.