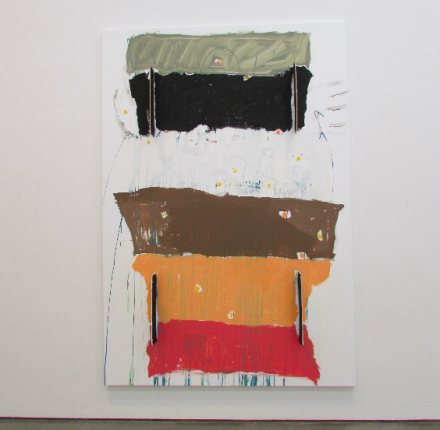 Richard Aldrich‘s wide-ranging stylistic and conceptual practice over the past twenty-plus years has spanned any number of formats, from sparse abstraction to minimalist exercises in process painting, often subverting these established schools through momentary inflections of wit and comic interpretation.  Yet at the core of Aldrich’s practice is an effort to push beyond mere stylistic variation and a good sense humor, often using his practice and its shifting material grounds to explore a wide range of both techniques in image-making, as well as processes in each work’s construction on an intuitive level. 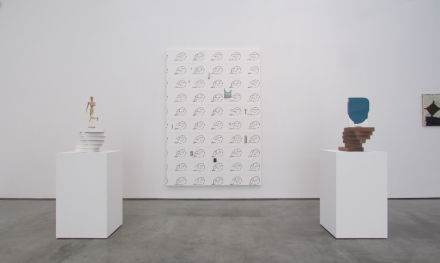 Currently on view at Gladstone Gallery’s 24th Street Location, Aldrich is presenting a new body of paintings and sculpture, continuing his nuanced and multifaceted approach to image making that pulls equally on the art historical, and his own polished sense of object and agency.  Drawing frequently from past series of works in the execution of these works, the artist has compiled a body of work that places new paintings into conversation with their own material construction, all underscored by his approach to the canvas. 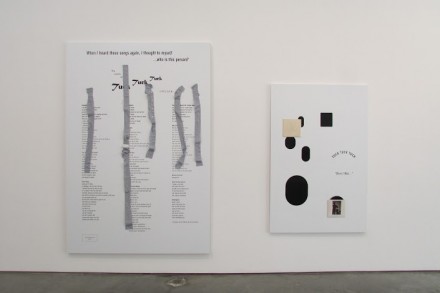 Aldrich’s work here seems primarily interested in the processes of duration and change, utilizing slats previously used to mount his canvases while painting.  These slats, attached to the linens shown here, gradually stretches and alters the space of the work through its sheer weight and the force of gravity, allowing what was once a bland prop in his creative process to now take center stage. 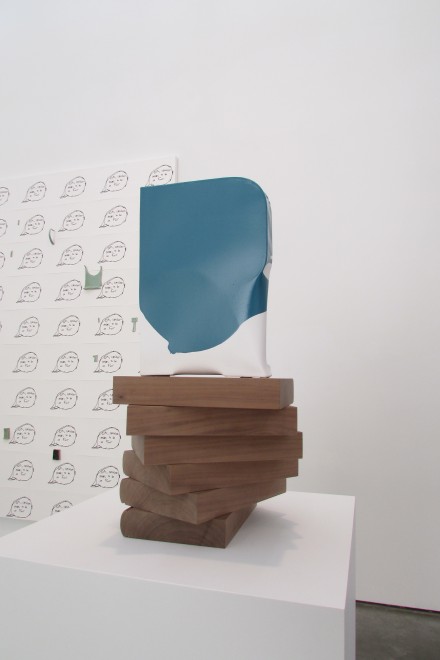 The studio-focused recycling of Aldrich’s work here bears similar points of entry to those frequently espoused by Sterling Ruby, yet here, Aldrich shows a notably more conceptual bent to his practice.  Rather than merely reusing the detritus and tactical elements of the studio in his work as another compositional element, the artist places these objects into conversation with the work itself, allowed to work their own enigmatic effects on the surface of the work.  Similarly, many of the paintings bear multiple years, playing off the dissonance (ostensibly) between the actual action of painting, and the point of release for the work.  Despite dates that place the work as two to three years old in many cases, a second date implies a later point in time, bringing attention to both the action of painting and its actual movement into the world beyond the studio, or perhaps secondary points of revision or secondary action on the canvas itself. 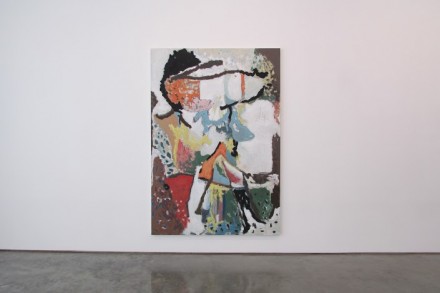 Richard Aldrich, Painting that Can be Here and There (2015), via Rae Wang for Art Observed

Accompanying these pieces are a selection of Aldrich’s newest painterly compositions, showcasing his range of stylistic approaches, from brusque abstraction to more slight, faded compositions in which the artist has seemingly scraped or buffed away parts of the already minimal accumulations of paint.  These variations in depth, concentration and gestural process running through the show underscores Aldrich’s constantly shifting series of both aesthetic and political interests in the construction of his compositions, and makes the current exhibition a strong introduction to his impressive arsenal.

Time Stopped, Time Started is on view at Gladstone through March 5th. 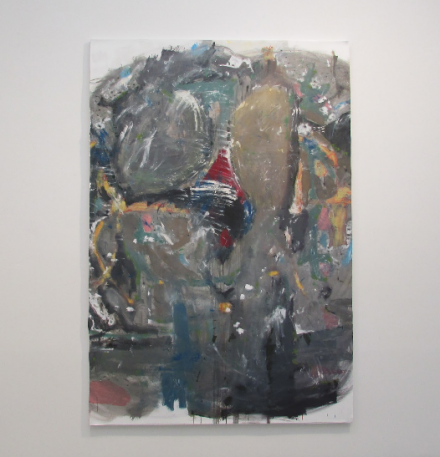 This entry was posted on Sunday, February 28th, 2016 at 12:00 am and is filed under Art News, Featured Post, Show. You can follow any responses to this entry through the RSS 2.0 feed. You can leave a response, or trackback from your own site.