January 20th, 2023
REFERENCE LIBRARY
Home » New York – Philippe Parreno: “IF THIS THEN ELSE” at Gladstone Gallery through April 16th, 2016

New York – Philippe Parreno: “IF THIS THEN ELSE” at Gladstone Gallery through April 16th, 2016 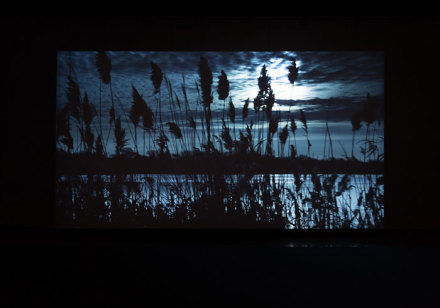 IF THIS THEN ELSE marks French artist Philippe Parreno’s first exhibition with Gladstone Gallery, on view at two of the gallery’s New York spaces (21st and 64th street).  The shows are separate in theme and bodies of work, yet intricately connected, as Parreno continues his exploration of the exhibition as a temporal experience involving architecture, art and the public.

Although separated by more than 40 blocks, the timing of everything in the spaces, even shifts in climate, are being controlled by a bioreactor built by two scientists in collaboration with the artist, located at the 64th street space, and connected to a computer programmed with conditional statements (if this, then, else) to serve as a sort of command center for the whole show. The bioreactor is home to yeast bacteria, which respond to the computer’s algorithms and anticipate the regularities of Parreno’s script, reacting to any variations that may occur through mutation or by remaining passive. In this situational relationship between microorganisms and the computer, nature and the artificial coexist to act as a controlling force in the exhibition, contributing to illusory environments in the galleries. 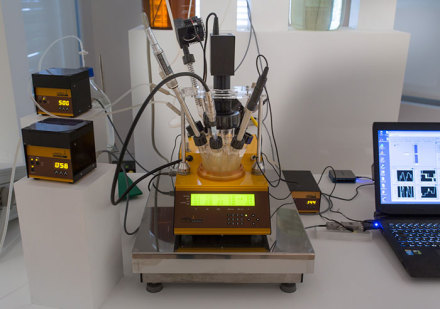 Philippe Parreno, IF THIS THEN ELSE (Installation View)

Flickering lights greet the visitor at the entrance to both locations, setting a somewhat ominous initial tone, yet after entering the townhouse location, Parreno’s frequent playfulness abounds, as colorful fish balloons float around the viewer for his work My Room Is Another Fish Bowl (2016).  These balloons swim through the air according to fluctuating temperatures (again referring back to the space’s bioreactor).  Two lamps made of blown glass, (Happy Ending, 2015), are installed on a fireplace ledge on the second floor, part of an ongoing series Parreno has made since the 90s, and based off of a design by Finnish industrial designer Eero Saarinen that were originally intended for a hotel that was never built.  Each lamp differs slightly from the other and glows bright then dim and bright again. They are posed, in part, as the ghostly presence of something that never came to pass, a literal embodiment of absent space, and evoke the haunting effects of an inanimate object come to life. 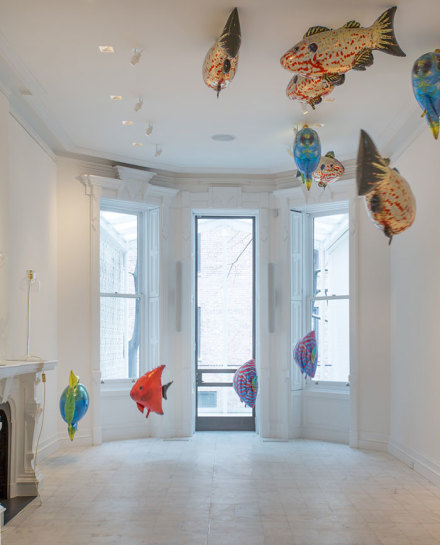 Outside the 21st street gallery hangs Marquee M1550 (2016). One of Parreno’s signature marquees, it is void of any textual information, yet signals that an event will take place and refers to the temporary existence of the “show.”  In the main space is the new film Li Yan (2016), partially shot in Flushing Meadow Park, Queens at dawn or dusk.In that liminal hour, where transition from night to day or day to night occurs, light itself plays a character of its own, as street lamps glow and create a buzzing energy echoed in the shifting lights of the gallery spaces.  Some of Parreno’s past films have been woven into this new one. 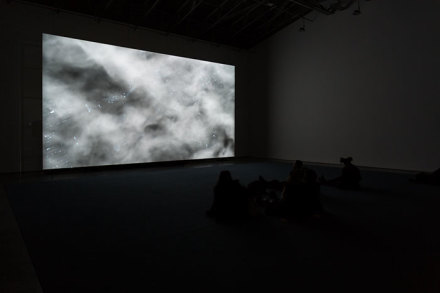 When the film is over, blinking circular lights reminiscent of the circles on the marquee appear behind what has materialized into a transparent screen. The sounds that permeate both galleries are the amplified noises being emitted by the bacteria. On the second floor is an older work from 2001, Mont Analogue, composed of colored light sequences that follow a section of Morse code translation of René Daumal’s allegorical cult novel of the same name, in which a group of explorers attempt to find an invisible mountain. 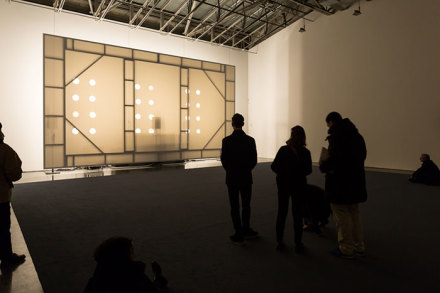 Philippe Parreno, IF THIS THEN ELSE (Installation View)

As each space echoes a part of the other, through lights, sound, even the buildings themselves seem to become two giant organisms feeding off of each other’s actions and processes.  Each seems to heave and breathe, yet the flickering of the lights gives the sense that the beast is vulnerable, sleeping, not fully on. There is an illusion set up, a fictional narrative within the spaces of the show, yet simultaneously a momentary reality in the automatic changes in one’s surrounding, in the way the viewer or viewers are being programmed to move through the spaces, reminiscent of the microorganisms anticipating or shaping changes in the bioreactor. By combining motifs recurrent in his work with past pieces, Parreno creates a complex constellation combining themes of illusion, memory and invisibility.  The magic here is Parreno’s orchestration of the ghostly presence of time as visitors move through the galleries, and serves as a fitting welcome to his new gallery home.

IF THIS THEN ELSE is up through April 16th.

This entry was posted on Monday, April 11th, 2016 at 6:01 pm and is filed under Art News, Featured Post, Show. You can follow any responses to this entry through the RSS 2.0 feed. You can leave a response, or trackback from your own site.