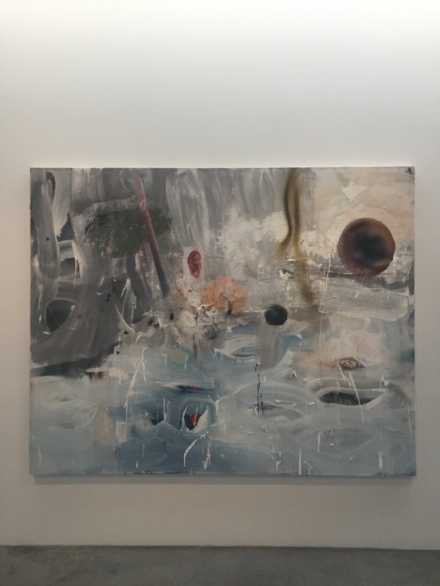 Double Pendulum, the first solo exhibition of Qiu Xiaofei in North America, is currently on view at Pace Gallery on 510 West 25th Street. Showcasing a group of new paintings, the exhibition presents the artist’s transition towards an abstract expression through a range of colors that complicate the relationships between foreground and background. 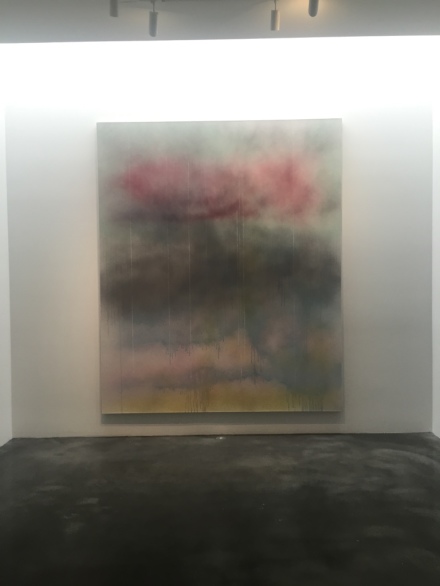 Qiu’s mixture of the opposite shades evokes a sense of imbalance and unsettledness, which is intensified by the labyrinthine scenes shown in his works. Often creating dark scenes drawing on forest motifs, the artist pushes his compositions towards the surreal through the addition of obscured, abstracted elements;  floating spheres, enormous geometries, indiscernible figures, even female figures in serpentine bodies or a constitution of misty and cloudy colors take the works to strange new expressive fields. 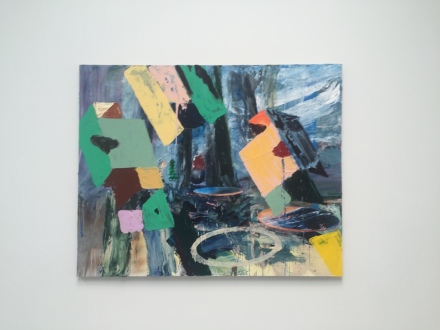 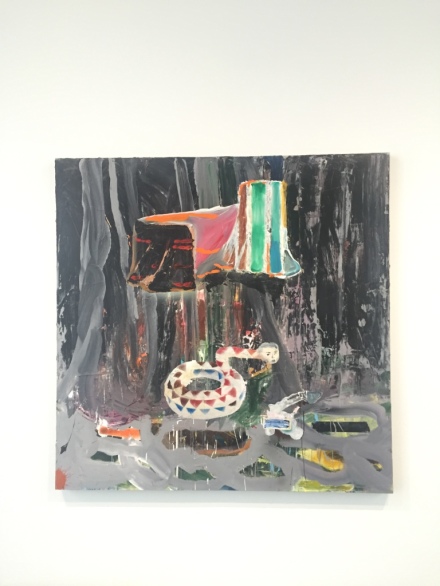 Qiu manifests these conflicts of reality and dream through the intricate depictions of one of his paintings, entitled Zero Gravity No.1.  In this work, the artist has rendered a purple and pink loop of paint, seemingly suspended against tangled and extended lines appearing to be trees.  Almost crossing the entire canvas, the loop seems to exist as an orbit, where three spheres are floating above it. In contrast to the imprecise “forest” scene, with three spheres floating above its slur of material, and giving the impression of gradual movement through the picture plane.  A tension is being accumulated, where the three spheres will perhaps lose the balance and ultimately drop from sight, hinted at by the work’s explosive background, which implies ample space beyond the canvas’s limits.  The artist constructs a space where the illusion and the reality are interwoven, obscuring each other while sensations of balance are frequently challenged in the painting or reasserted, as if poised on the brink of a chaotic collapse. 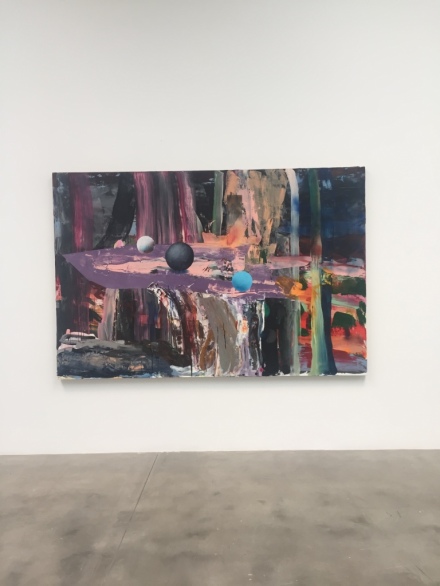 This sense of tension is loosened considerably with the piece Female Theft.  Differentiating from other works in the exhibition created on single and large canvas, the artist has separated this painting into different elements. The work is a configuration of five small paintings, presenting a dark forest in the upper reaches of its disjointed scenery, below which are two other paintings of abstract loops and swirls, as if an underworld lurked below the dark surface of the woods, lent a perplexing nature through rough and tangled brushstrokes, and its oppressively heavy colors.  Nearby, however, this darkness is compounded by a female nude, holding the head of a male figure.  This tension of masculine and feminine is compounded by a pair of small balls held by a net, carrying references to the male reproductive organs and the gender oppositions in play. The artist breaks down his frequent subject, turning it into different parts, allowing multiple layers and narratives into this work, while also pushing broader narratives with a minimum of expression. 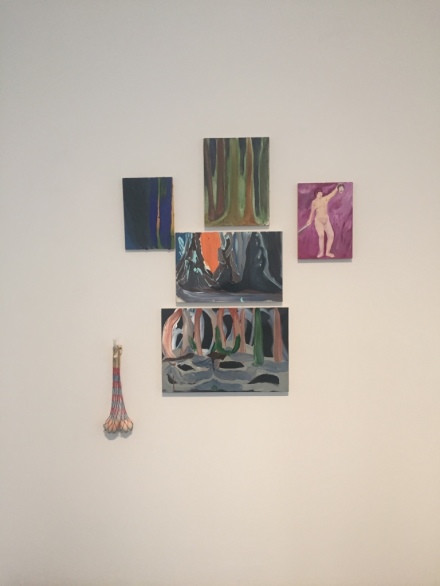 Focusing on the artist’s most recent practice, Double Pendulum shows Qiu’s shift into abstraction, but also perhaps an exploration, of relationships between conceptual expressions with the indecipherable, the illusional and the subconscious.

The exhibition is on view until April 23rd.

This entry was posted on Sunday, April 17th, 2016 at 12:59 am and is filed under Art News, Featured Post, Show. You can follow any responses to this entry through the RSS 2.0 feed. You can leave a response, or trackback from your own site.