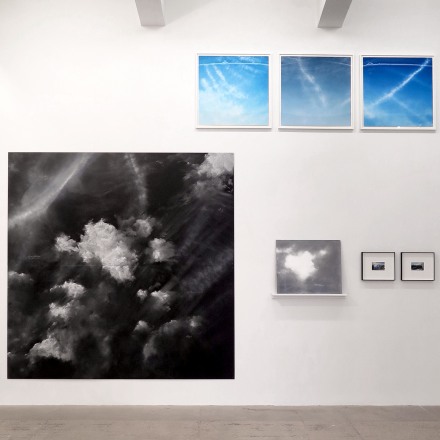 The Marian Goodman Gallery, New York presents ‘…my English breath in foreign clouds’, a comprehensive survey of Tacita Dean’s recent works: a collection of clouds observed from Los Angeles, three 16mm films including the striking ‘Event for a stage’ (2015) and ‘Portraits’ (2016), an intimate one on one with David Hockney smoking in his studio, as well as a photographic series newly printed on Cibachrome paper, ‘Gaeta 2015 – Fifty photographs, plus one’ (2015) which subtly links Cy Twombly’s house and studio in Italy with the poetics of his thinking process. 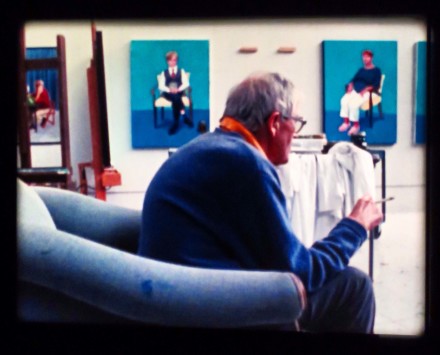 ‘Portraits’ (2016) represents David Hockney in his LA studio, thinking while smoking, surrounded by his paintings in the making: a series of people sitting in the same recurring armchair and blue background. The film is composed of five takes / sequence shots corresponding to five cigarettes Hockney smokes successively. Depicting the artist in different positions, either sitting or standing looking and considering his work, the film smoothly evolves according to his mood. His laugh suddenly resonates through the multiplicity of figures surrounding him. Tacita Dean’s skillful use of mise en abyme is further suggested by a discreet yet critical mirror image: a picture of her own son portrayed by Hockney is embedded in the background. 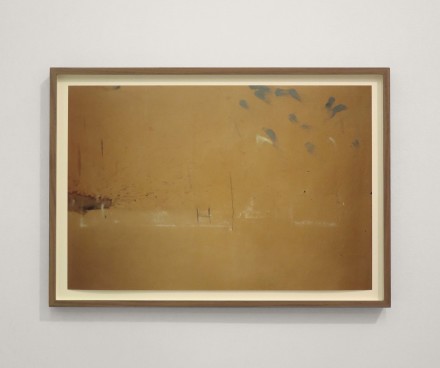 Tacita Dean, a view of Giorgio Morandi’s studio, from the series Gaeta 2015 – Fifty photographs, plus one (2015), detail, via Sophie Kitching for Art Observed Biographical and documentary films have punctuated Tacita Dean’s practice over the years as a means to capture the human sensibilities of the individual. Her art of portraiture through a person’s objects, details and gestures, via specific places and environment, have enabled her to enter the visual universe of subjects who inspire her. Robert Smithson, Claes Oldenburg, Merce Cunningham, Giorgio Morandi and Cy Twombly are among other artist figures she has recently observed. 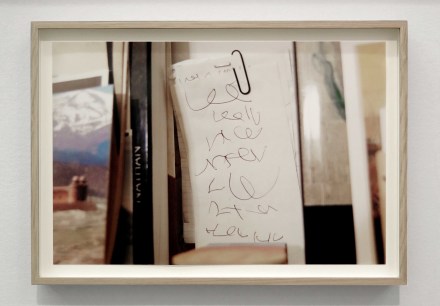 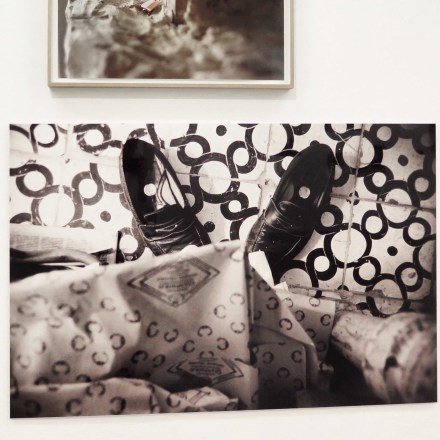 Dean constructs for instance in ‘Gaeta 2015 – Fifty photographs, plus one’ (2015) a visual and personal biography of Cy Twombly’s house in Gaeta, Italy. Initially published as a photo essay in 2009 as part of one of Twombly’s catalogues, the pictures were selected at the time with the complicity of Twombly himself. They are here presented as a photographical series on Cibachromes using a variety of papers differing in size and matt or glossy qualities. This printing technique used for the reproduction of film transparencies is literally at threat today. This body of work thus appears as a testimony of the artist’s inclination towards non-digital printmaking processes. 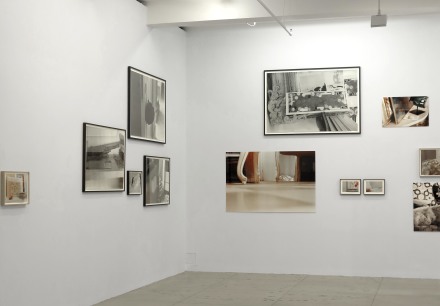 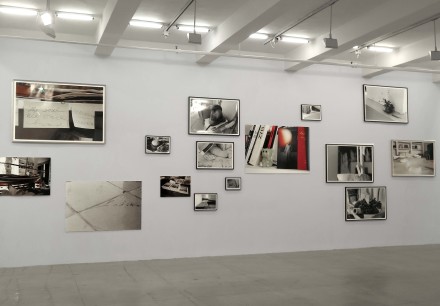 Choosing a disappearing archival medium to preserve Twombly’s former home, which has since disappeared following his death in 2011 however stands as a strong poetical act rather than a form of nostalgia. Through details, close ups and unconventional angles, Tacita Dean unveils the artist’s living and working environment. Displayed throughout the gallery space in an effortless balance, the shots invite us to reflect on how one’s thinking and creating process can manifest itself through personal objects and notes and their deliberate positioning in everyday surroundings. 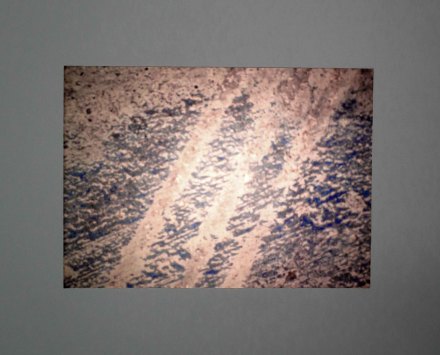 The second film of the exhibition ‘Buon Fresco’ (2015) was also shot in Italy, in Assisi, province of Perugia. The rear projection features a series of over 300 enchanting close ups of ‘The life of Saint Francis’, the fresco painted by Giotto at the end of the XIIIth century in St Francis’s Upper Basilica. Shot from a high scissor lift with a macro lens, this film exhibits an unprecedented take on the mural, precisely scanning the fresco from Giotto’s own perspective while he was painting it. This experimental, aesthetically compelling film demonstrates the qualities of a painted still life. Through the abstracted and fragmented representation of one of the most venerated religious figures in history, Dean simultaneously delves into the realms of art history at the very junction of Medieval and Renaissance eras. 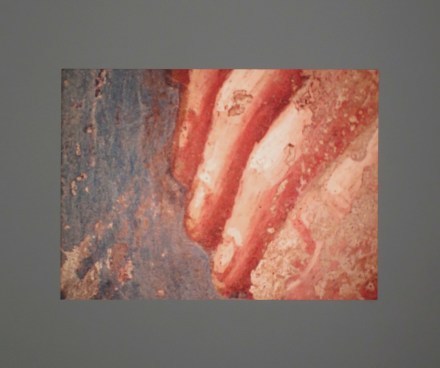 The emotion conveyed by this piece is directly linked to the pictorial richness of film as a medium. Long standing advocate for photochemical film, Dean gives further evidence of its broad potential in the 50 min long ‘Event for a stage’ (2015), screened in the third floor gallery space transformed for the occasion into a movie theater with projectionist and daily screenings. Unlike ‘Buon Fresco’ and almost any moving image displays showcased in art galleries, which allow visitors to wonder in and out as they please, Dean sets here a specific timeframe for the public to experience this narrative from the very beginning. 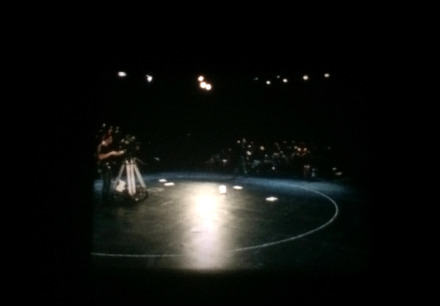 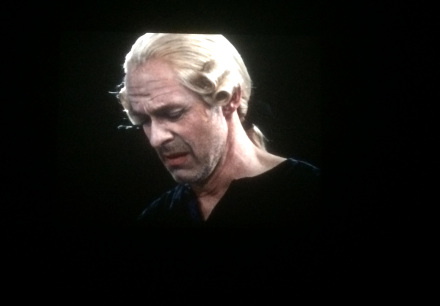 Tacita Dean, Event for a stage (2015), via Sophie Kitching for Art Observed

And what a masterful introduction, as Dean’s camera follows in a vertiginous circular movement British actor Stephen Dillane walking around and around an empty stage… Gradually the public in the background starts filling up the seats of the Australian theater where the film takes place. This new work is in fact a documentation of a four night performance imagined for the 2014 Sydney Biennial, in which the artist confronted her work for the first time with theater, questioning the boundaries between the visual and performing arts. The result is an engaging whirlwind in which the duo Dean/Dillane thrives to find a converging point between their practices, and where commonplace statements are undermined in search of a raw state of presence. This quest for “presentness” is beautifully rendered through the film, which layers, cuts and pastes the four performances together, to lively activate, on the stage of time and space, a penetrating portrait of human condition. 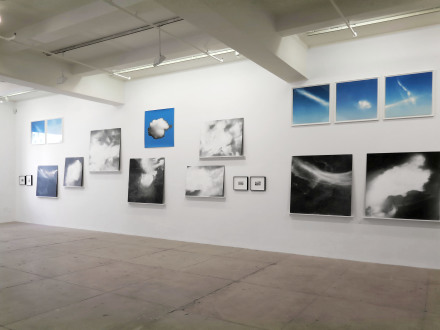 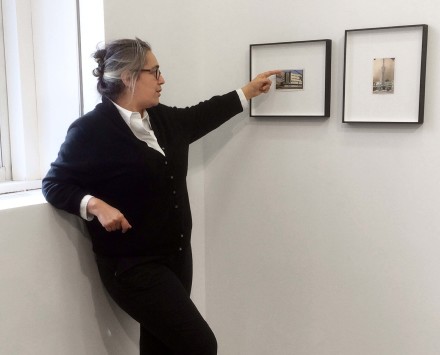 Tacita Dean pointing at Academy Museum (2016), from the series A Concordance of Fifty American Clouds’ (2015-2016), via Sophie Kitching for Art Observed

Finally ‘A Concordance of Fifty American Clouds’ (2015-2016) on view in the front gallery brings together a collection of drawings on slates and black boards, found postcards, over-painted photographs and hand-drawn lithographs picturing blooming Californian clouds and striking skies. “I have become a cloud watcher”, said Tacita Dean referring to her recent move to LA, as she walked through the high-rise installment of her works. To render the ephemerality and movement of clouds, the artist developed a technique of spray chalk, which she applied on found slates, reminiscent of Twombly’s own black boards series. Through these fictitious clouds depicted from imagination, emotion and memory, Tacita Dean indeed succeeds in grasping the natural essence of this ever-fleeting phenomenon. 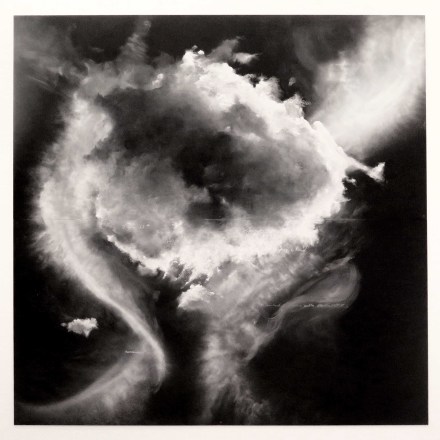 Tacita Dean, Kippy Cloud (2016), from the series A Concordance of Fifty American Clouds’ (2015-2016), via Sophie Kitching for Art Observed 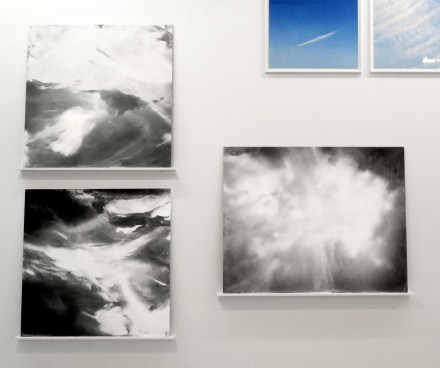 Using a system of annotations, which merge with the existing scratches and graffiti present on the slates, the artist displays an airy cosmography of words and form, light and shadow, void and volume. The universality of this series is further suggested by the titles, borrowed from Shakespeare’s numerous plays, and inscribed with chalk on the slate drawings. One of them ‘Sans Bound’ derived from “The Tempest” also refers to a line declaimed by Dillane downstairs. The lithographs representing airplaine trails and the large square photographs of individual clouds offer three dimensional depth and luminosity in different hues of blue which recall Hockney’s omnipresent blue in the adjacent room. In the seductive series of found “cloud postcards” Tacita Dean over-painted recent memories of her daily life in Los Angeles, as illustrated in the view of her Californian studio with her rented car in the foreground. The discreet autobiographical references scattered here and there enhance the soothing yet vibrant mystery surrounding this new body of works. Tacita Dean, Yellow Hill (2016), from the series A Concordance of Fifty American Clouds’ (2015-2016), via Sophie Kitching for Art Observed 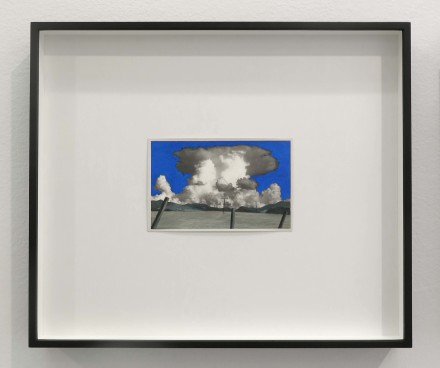 Tacita Dean, Cabrillo Highway (2015), from the series A Concordance of Fifty American Clouds’ (2015-2016), via Sophie Kitching for Art Observed 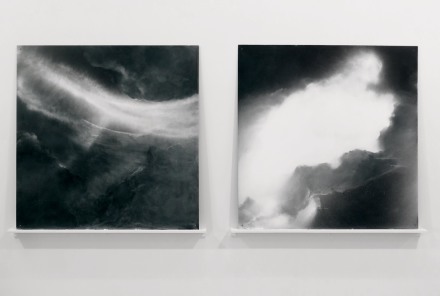 Tacita Dean, Cutting the clouds (2015) and With the Southern clouds contend (2016), from the series A Concordance of Fifty American Clouds’ (2015-2016), via Sophie Kitching for Art Observed

A recurring attribute of Dean’s artistic practice is her subtle sense of withdrawal, characterising both her approach to people and places that she observes and portrays. Simple yet rigorous conceptual guidelines encapsulate each of her subject matters. The grainy aesthetic of her celluloid films adds to the meditative experience. A similar attention to texture and restrained color palette can be found in her drawings and photographs. The exhibition captures the beauty in obsolescence while maintaining a particular sense of distance. Tacita Dean’s work is an open invitation to pause, reflect and exchange, in a quiet conversation, on this necessity of withholding.

This entry was posted on Saturday, April 23rd, 2016 at 8:22 pm and is filed under Art News, Featured Post. You can follow any responses to this entry through the RSS 2.0 feed. You can leave a response, or trackback from your own site.