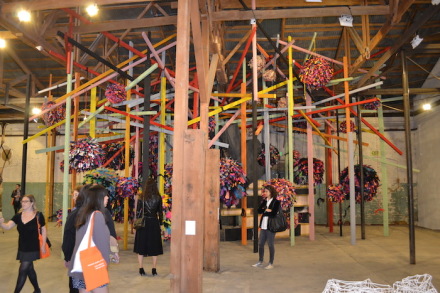 This past month has seen the much-anticipated opening of Hauser Wirth & Schimmel’s new gallery space in Los Angeles’ Arts District. The scale of the former flourmill—totaling over 100,000 square feet of exhibition spaces, book store, Printed Matter Lab, courtyard and garden, forthcoming restaurant, as well as offices—rivals the real estate of many museums, as do its curatorial aspirations.  Swiss couple Iwan and Manuela Wirth have partnered with former MOCA curator Paul Schimmel, a definitive fixture of Los Angeles art history and pioneering figure in its contemporary art scene. In his opening remarks during the press opening, Schimmel described his vision of the gallery as a community-driven, public-oriented space that would proffer a seamless urban experience for the creative downtown demographic, not only focused on changing the traditional relationship of the gallery to its public, but also between art and life.  In partnering with Hauser & Wirth, lauded for its museum-caliber exhibitions and dedication to scholarship and publications, Schimmel announced this new institution’s role in serving and revitalizing the arts of Los Angeles. 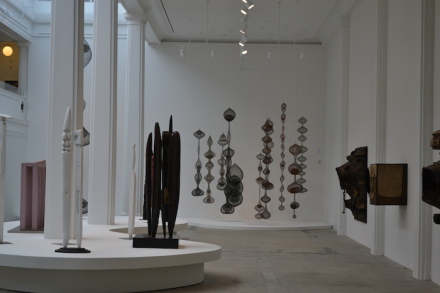 Revolution in the Making (Installation View)

The inaugural exhibition, Revolution in the Making: Abstract Sculpture by Women, 1947-2016 is a bold revision of the history of postwar sculpture—a museum quality show that manages to still convey a sense of urgency.  Showcasing 34 artists and nearly 100 works,  Schimmel and his collaborator Jenni Sorkin trace the evolution of sculptural expression over the past seventy years through the radical ingenuity of female artists, casting women as the propelling force in redefining the language and indeed definition of sculpture, in opposition to the broadly male canon in the postwar art historical narrative.  Women’s influence on the legacy of abstract sculpture stands to be rewritten, Sorkin contends, to highlight their pioneering of new materials and methods, new forms and new functions of and for sculpture. Noting the restrictive cultural limitations on women in the arts.  International and cross-generational, this broad survey includes many blue-chip artists as well as those overlooked by a masculinist account, to revise and reinvigorate a rich and consequential history. 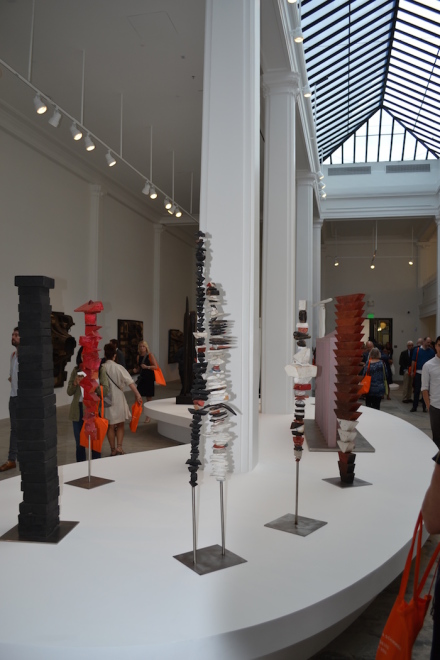 Unfolding chronologically, the show begins with a postwar generation that includes Louise Bourgeois, Ruth Asawa, Louise Nevelson and Claire Falkenstein.  Under copious natural light from the glass-vaulted ceiling, these abstract works elicit a somatic sense of the body, evoked in the biomorphic forms and contours of the objects and their pedestals.  Bourgeois’ wooden totems, a group of “Personage” sculptures, are displayed on a curving platform, a float of characters looking out towards the circulating viewers. Each sculpture’s anthropomorphic title, including Listening One, Depression Woman, and Observer, epitomize Bourgeois’ deeply psychological, and often times autobiographical, practice. Six large wall pieces by Bontecou, constructed in welded steel, canvas, rope and wire, pit the feminine void against the aggressively masculine armature of army cloth and jeep grill, establishing a bodily referent in extruding jagged bas-relief. By contrast, Nevelson’s monumental, monochromatic assemblage stands as a stark backdrop to Falkenstein’s tangled balls of wire—large copper bundles encasing jewels and glass in knotted metal mesh.  The emphasis on construction, assemblage and process in these works speak to the feminist expansion of what art could be; to appropriate both traditional feminine crafts (such as jewelry making, as in the case of Falkenstein) and learn masculine labor skills (Bontecou taught herself to weld) in order to innovate and redefine the sculptural idiom. 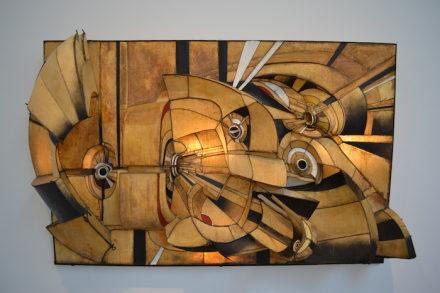 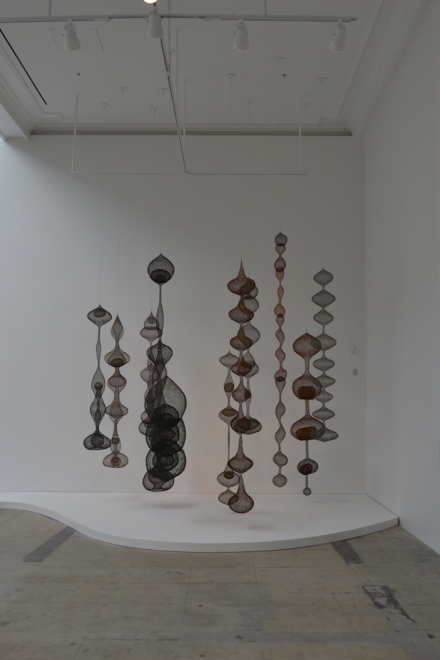 Following these mid-century progenitors, the subsequent galleries focus on 1960’s and ‘70’s post-minimalist artists. Their use of new materials, (including latex, fiberglass and textiles etc.), and emphasis on process celebrated the methods and labor of creation, positioning women at the forefront of a change in the sculptural landscape beyond minimalist rigidity and the masculinist monolith. A group of fiber-based pieces, including Sheila Hicks’ lemon-yellow Banisteriopsis, Francoise Grossen’s Five Rivers, and Magdalena Abakanowicz’s monumental Wheel with Rope, introduce the galley space to the feminist subversion of minimalism’s material neatness.  Upending the strict formality of their male counterparts, these female artists imbued the minimalist modality with expressive sensuousness, both through soft materials and an emphasis on the process of creation (braiding, knotting, and other textile techniques typically considering craft work).  Eva Hesse’s two works Aught and Augment, reunited here for the first time since their original installation in Nine at Castelli’s in 1968, embody this feminist radicalism. Rectangular latex and canvas sheets hang wrinkled, puckering and skin-like on the wall, against the prone floury spread of sheets on the floor, with a crumpling, folding geometry that opposes the reductive forms of minimalism to remain expressive and anthropological. 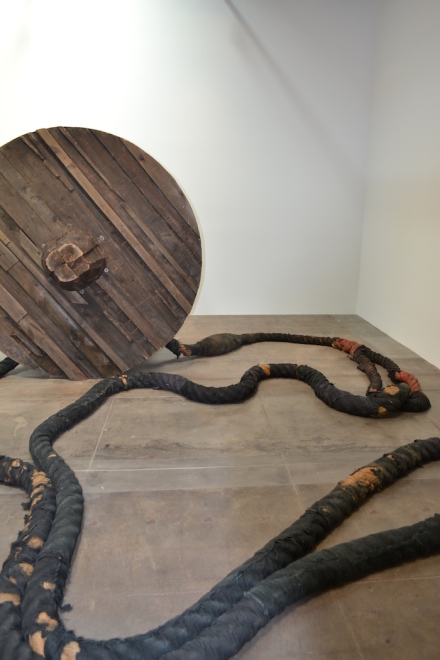 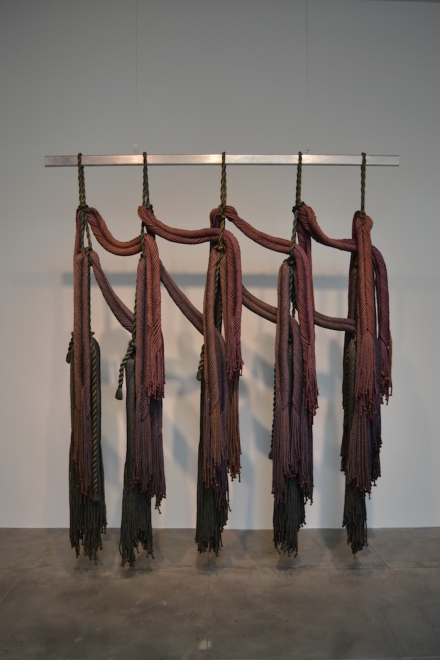 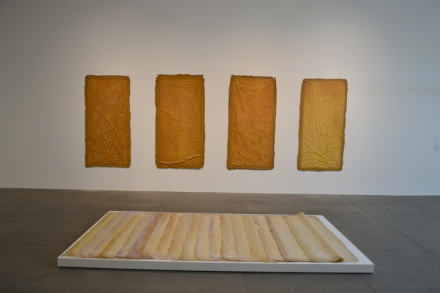 While retaining the geometry and even formalism of minimalism, many female artists eschewed its industrial materials and impersonal methods in favor of more natural media and an emphasis on process. Michelle Stuart’s pioneering contributions to land art are included here, among them a minimalist stack of square rag papers, rubbed with earth to create pigment, record their geographic referent to explore and cite their place of origin.  In the expansive open courtyard, Jackie Winsor’s 30 to 1: Bound Trees (first installed at the Nova Scotia College of Art and Design in 1971) has been reconstructed—a thick bundle of white birch branches bound with hemp that soar 20 feet into the air, monolithic and natural, yet wholly constructed by the artist. 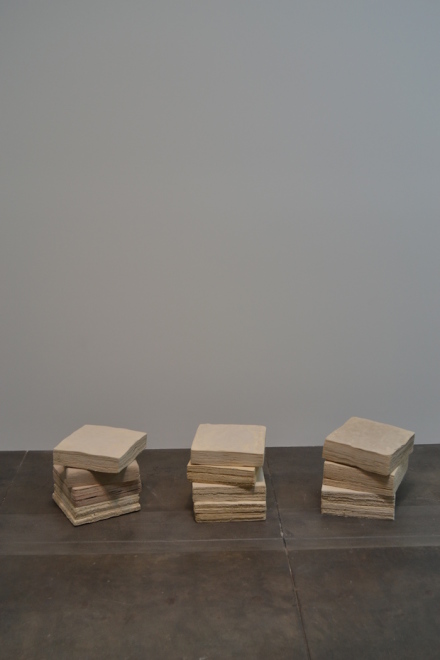 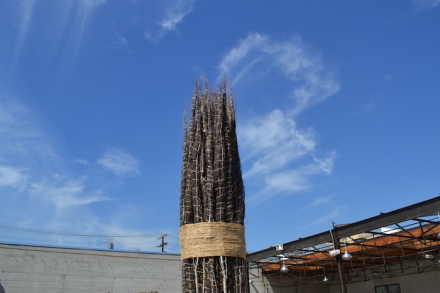 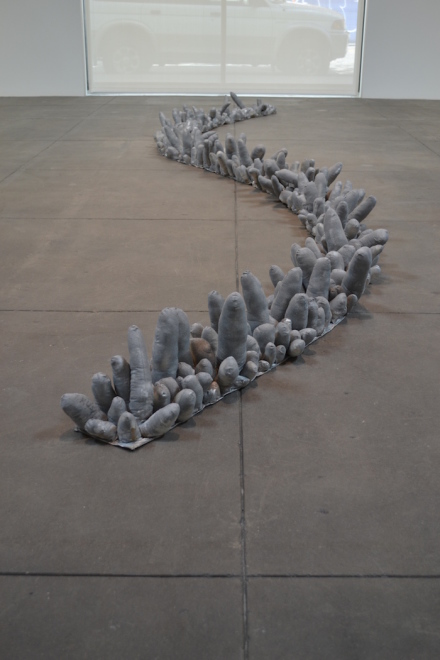 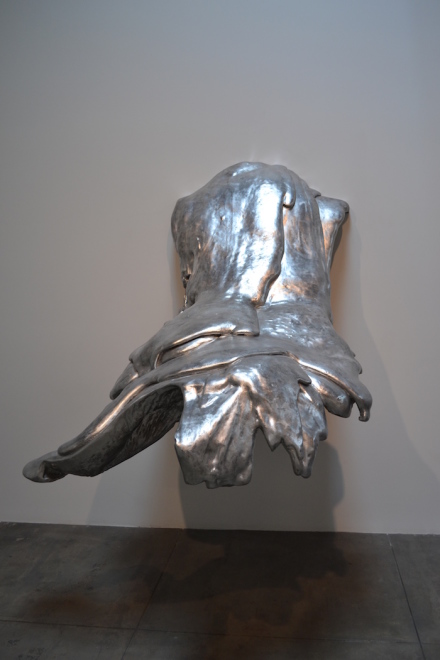 The exhibition continues onto the Post Modernist generation, including works by Liz Larner, Anna Maria Maiolino and Senga Nengudi.  This global group announces the expansion of installation works, transitioning from an object-based practice towards more immersive environments. These artists engage both space and the viewer, through performance, new mediums and social commentary.  Isa Genzken’s group of cement constructions, erected on steel pedestals like a miniature city in ruin on display, mirrors Ursula von Rydingsvard’s expansive presentation of nine carved cedar cones across the room. 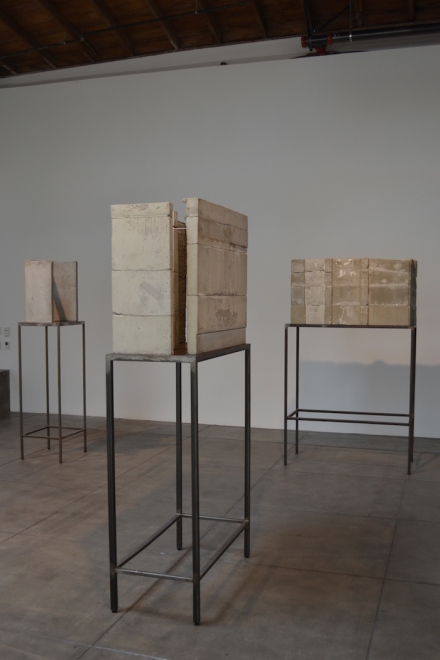 The final galleries showcase a group of contemporary sculptors, some commissioned for this space specifically. The industrial warehouse space, paint flaking from the exposed brick walls, contains an explosion of color on a grand scale, with works by Karla Black, Rachel Khedoori, Kaari Upson, and others . Phyllida Barlow’s untitled: GIG envelops the viewer and space in a cacophony of brightly colored timber scaffolding, tinseled with giant pom-poms made of recycled fabrics.  Abigail Deville’s Intersection takes on Richard Serra’s Intersection II, replacing his monumental steel slabs with pelleted and colorful flats of reclaimed wood an debris.  Shinique Smith’s gorgeous Forgiving Strands hangs in the breezeway, which bisects the block on which the gallery stands. Somewhat reminiscent of Mike Kelley’s assemblages, stringing together discarded material refuse, bounded into a graceful billowing clothesline of consumerism. 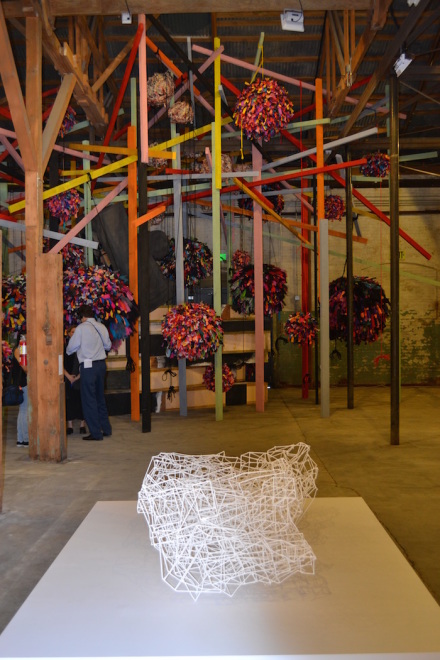 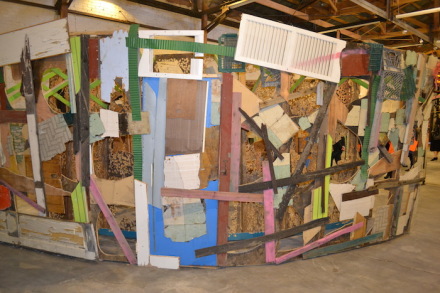 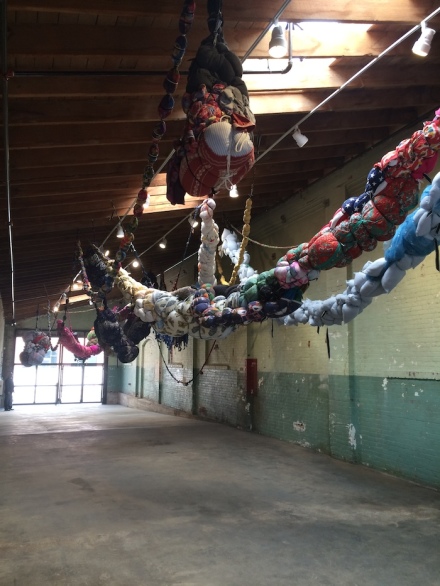 These artists take the craft techniques of their predecessors to great lengths, creating environments out of domestic and found materials, recycled and assembled by hand.  While the body has been absented from the formal construction of these works, with far less of an interest in the feminist body and gaze, there is space for the viewer to move through and around the work, and to participate in its expression. The legacy of these generations of revolutionary female artists is evident not just in these new works, but in broad history of abstract sculpture at large. 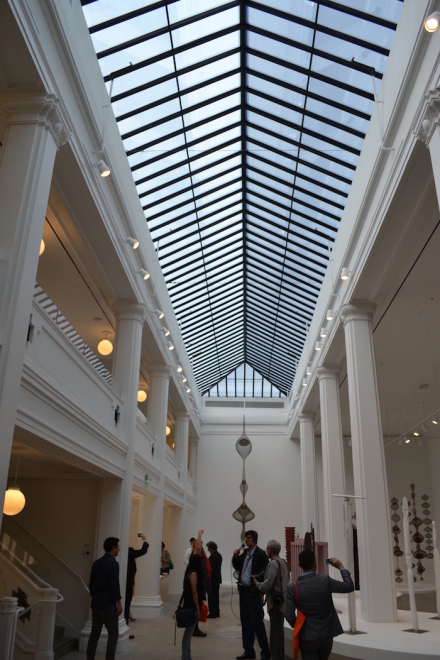 Revolution in the Making (Installation View)

This entry was posted on Sunday, May 8th, 2016 at 12:00 am and is filed under Art News, Featured Post, Show. You can follow any responses to this entry through the RSS 2.0 feed. You can leave a response, or trackback from your own site.