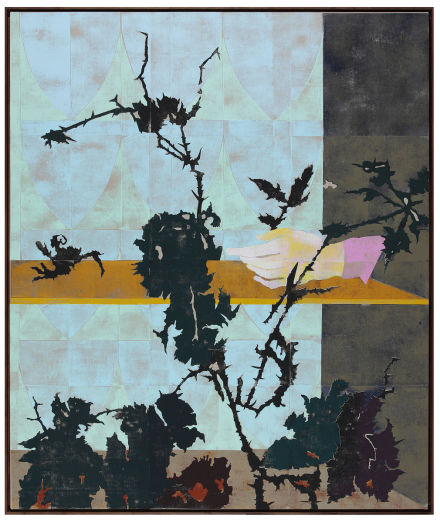 Now through June 11, CFA Berlin presents a series of new work from Gert & Uwe Tobias, drawing from a rich tapestry of visual and historical references, including Dutch florals, contemporary painting and medieval art forms, where surrealism meets prehistory. The twin brothers, born in Brasov, Romania and now working in Cologne, center their work in large part on their Romanian heritage, weaving together this legacy with graphic design, and modern abstraction.  Horror and the grotesque are frequent themes of the brothers’ work, revealing an easy linked forged between the hybrid forms found in Surrealism and those featured in myth and legend.  This series of woodcuts adheres to this same hybridization and mixing of styles that has dominated their previous work. The self-developed technique of printing woodcuts on canvas lends the representations a dense and colorful, almost cartoonish appearance, and while the subject matter of these images seems to illustrate or respond directly to scenes from a grotesque horror story, an element of loosely flowing abstraction prevails. The ambiguity of context and temporal location co-exists in the works with a sense of exacting specificity, presenting surfaces that prove immediately intriguing and simultaneously inaccessible. 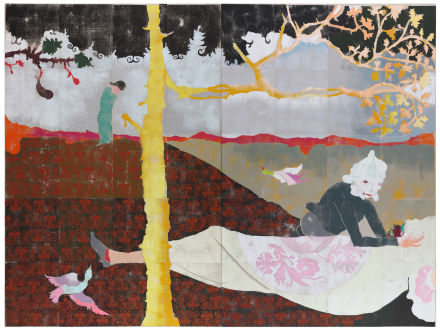 In one piece, for example, a human figure crouches over what seems to be a woman lying prostrate on the ground, draped in a pink floral sheet. Her head is outside of the frame, while the crouching figure’s head resembles at once a skull and a white insect of some sort, backdropped by an uncertain collage of colors.  The trunk of a golden tree splits the frame, and a duck flies upside down in the background. The figure’s gesture is at once tender and parasitic—he reaches towards, or leans against, the body of the prostrate woman, lending a certain unspoken dread to the scene.  In another piece, a first glance places it more easily in the legacy of Western abstract art.  An apparently female figure features centrally, with a bulbous body and head in her hand as a gesture of grief. Her disproportionate limbs and multi-colored facial features evoke Pablo Picasso’s The Weeping Woman (1937). 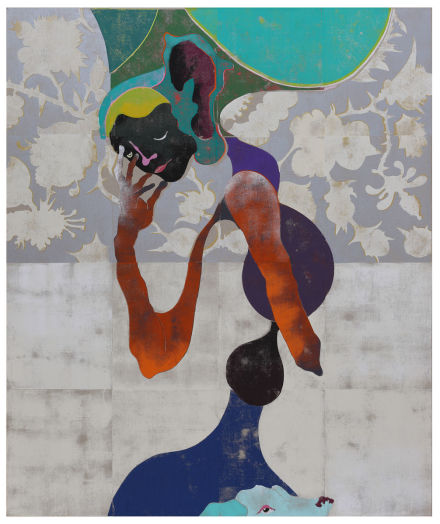 The exhibition reveals an updated approach to the brothers’ work with traditional folk image-making techniques. Though a richness of influence and exaggerated imagery continues throughout, their pieces possess a new, more polished appearance, and a more contemporary mannerism that speaks to a honed mastery of their processes.  Through the unification of uncommon elements and narrative styles, this new series of images from the Tobias brothers at once mystifies and invites the viewer into a framework of understanding. The brothers have created a key into the intimacy of legend and have created a comprehensive illustration of some fantastical and dark world apart.

The show is on view through June 11th.

This entry was posted on Thursday, June 2nd, 2016 at 12:00 am and is filed under Art News, Featured Post, Show. You can follow any responses to this entry through the RSS 2.0 feed. You can leave a response, or trackback from your own site.