January 20th, 2023
REFERENCE LIBRARY
Home » AO On-Site – Berlin: “The Present in Drag,” the 9th Berlin Biennale at the Kunstakademie Berlin and The European School of Management and Technology Through September 18th, 2016

AO On-Site – Berlin: “The Present in Drag,” the 9th Berlin Biennale at the Kunstakademie Berlin and The European School of Management and Technology Through September 18th, 2016 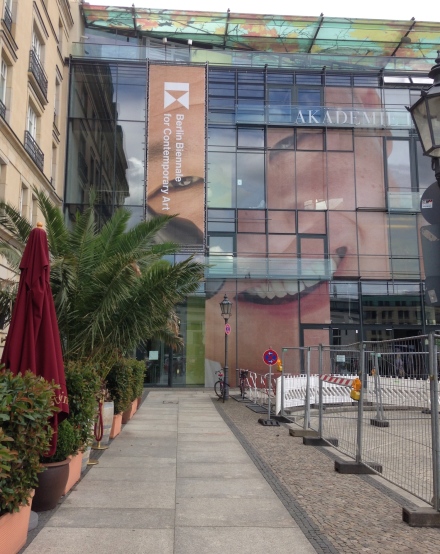 Berlin Biennale at the Kunstakademie, all photos via Anna Corrigan for Art Observed

While the DIS-curated Berlin Biennale is spread across a range of exhibitions and venues in the German capital, the beating heart of this year’s show is arguably the Academy of the Arts, a sleek modernist building located adjacent to the Brandenburg Gate and perched over a square heaving with tourist activity and history.  Walking into the foyer of this building, one immediately encounters a series of large, high-resolution photographs depicting warped, fragmented nationalities and identities.  Further upstairs, the cluster of screens, plastic and digital games that have come to define this Biennale buzz take over, creating a clustered, albeit striking experience of the post-digital arts landscape.  The location is densely packed with artists and works whose nationalities and political concerns range from brand-name art projects to a poignantly honest confessional rap about the refugee experience in Berlin. 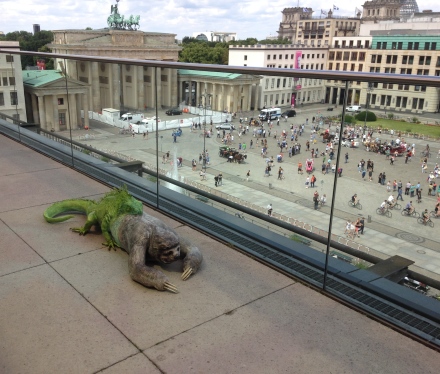 The Academy of Arts seems to host the most impressive feats of technological intervention as it concerns the Biennale at large.  A particularly impressive example of this is Jon Rafman’s View of Pariser Platz, a virtual reality film that launches the viewer from their position on a balcony overlooking Pariser Platz into the depths a vaguely apocalyptic dystopia and back again through augmented reality. The viewing experience is well worth the wait in line, during which time one can absorb The Swallower Swallowed, a series of sculptures of animals swallowing other animals scattered across the balcony. This implied feedback loop of swallowing and being swallowed is intended to reflect our current ravenous consumption of technology, and echoes the experience of challenging and deconstructing concepts of space and time through technological spectacle. 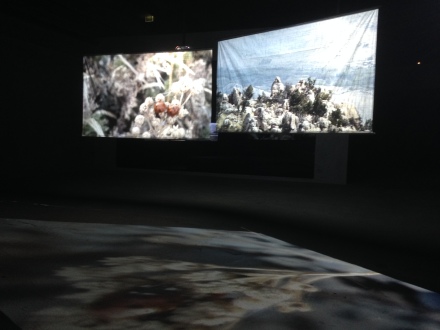 Two more particularly impressive and challenging pieces are Hito Steyerl’s The Tower (2015) and ExtraSpaceCraft (2016), separate video installations, where videos run side-by-side in the dimly-lit concrete space of the Academy’s sub-basement. Both installations approach video game aesthetics and engage with such subjects as terrorism, gentrification, and the construction of war, using Steyerl’s signature collision of modern contexts, pop iconography, historical data and philosophy to delve into the construction and representation of realities as a political act. 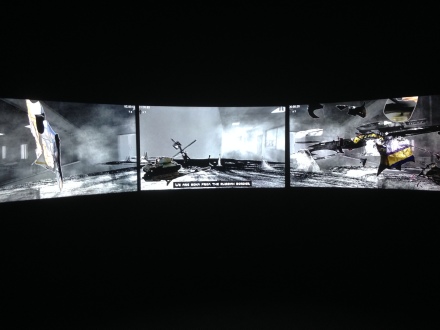 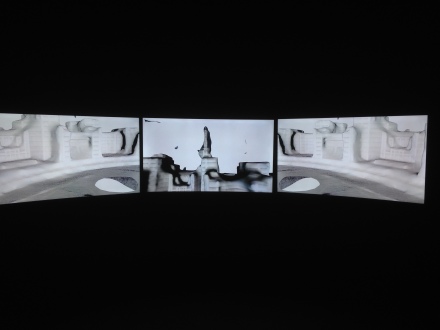 In the floors between Steyerl and Rafman’s contributions, there are numerous interrogations of technologies of war (for example, images produced by and of drones) and the levels of absurdity approached in the disparity between physical and digital realities that often accompany them. The most successful and interesting of the many pieces packed into the Academy, however, are those that demonstrate the political force of simple expression. In this sense, Homeland by Halil Altindere triumphs. The music video, shot in Germany and Turkey, discusses the experience of forced immigration, pulling scenes from real-life experience blended with the reconstructed narratives of border crossings, cultural integration, and discrimination.  The rapper Mohammad Abu Hajar, a Syrian refugee now based in Berlin, gives voice to these narratives, which feel particularly timely and relevant to this city, and lends the piece a refreshingly vivid reminder that, despite the insistence on global networks and technology’s eradication of distance pervading the Biennale, citizenship and the movement of bodies in space is one of the most pressing issues of our times. 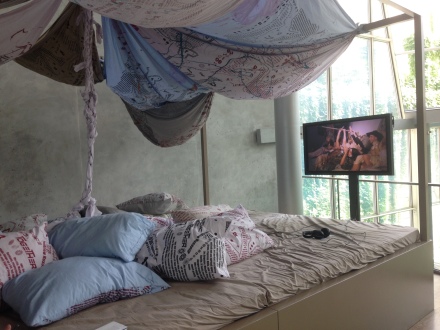 M/L Artspace, In Bed Together

Conversely, The ESMT European School of Management and Technology, the fourth location hosting this year’s Biennale, documents the fair’s intervention into more rigid institutional and academic structures. The work of Katja Novitskova; three separate pieces installed throughout the space depicting flames, horns, and animal body parts in computer-generated images, addresses the origin story of “western” society as a continual obsession with power, prosperity, and fire. The School of Management and Technology also hosts the work of Simon Denny with Linda Kantchev, an information booth that addresses the visualization, management and movement of the digital monetary platforms that are the backbone of the BitCoin cryptocurrency.  It’s an interesting investigation, tying institutional knowledge to the future of money and finance itself, explicitly at the site where these forces are being marshaled and applied to further financial gain.  For Dis, and its related artists, this advancement seems to be the only way to work against, or perhaps alongside, the increasingly rapid mechanisms of global capitalism, proposing an insertion of creative resistance through a repositioning, or manipulation of these same forces. 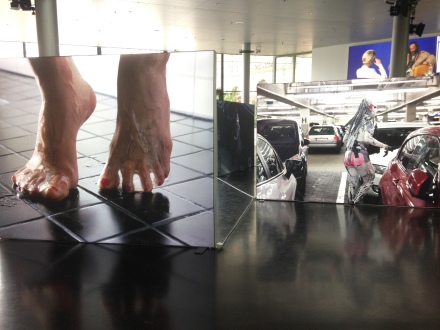 The Biennale at The ESMT European School of Management and Technology

Staging a contemplation of what digital technology might contribute to contemporary art, and perhaps what it already has fundamentally altered, the show’s frequent shifts and changes leave one grasping for solid ground. Many of the work on view serves as a warning of what over-saturation in digital technology may reap, namely, awkward voids produced by endless feedback loops of digital consumption, communication and repetition.  Yet this is perhaps equally its strength, a critique through feedback that looks for new ways of operating within the pervasive digital mechanisms of modernity.  In a sea of digital bells and whistles, the works that leave a lasting impression offer this sense of hope, of a world not merely made over by machines, but rather one where these machines are collaborators in the process of human change and progress.

This entry was posted on Monday, July 11th, 2016 at 4:46 am and is filed under Art News, Featured Post, Show. You can follow any responses to this entry through the RSS 2.0 feed. You can leave a response, or trackback from your own site.