New York — “The Language of Things” at City Hall Park Through September 29th, 2016 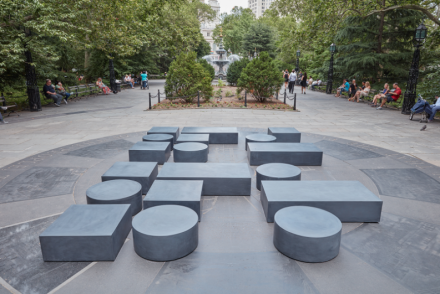 The Public Art Fund’s The Language of Things, inspired by Walter Benjamin’s 1916 essay On Language as Such and on the Language of Man, takes on a challenging prompt this summer, seeking to communicate with the public through works that utilize language and linguistic themes in one of the most congested and sonically dense spaces in the city, just outside of City Hall downtown.  Benjamin’s assertion that “there is no event or thing in either animate or inanimate nature that does not in some way partake in language” further deepens this show’s proposed dialogue, looking at complexities of language as a utilitarian, communicative tool, to emphasize Benjamin’s conclusion that “it is in the nature of each one to to communicate its mental contents.” 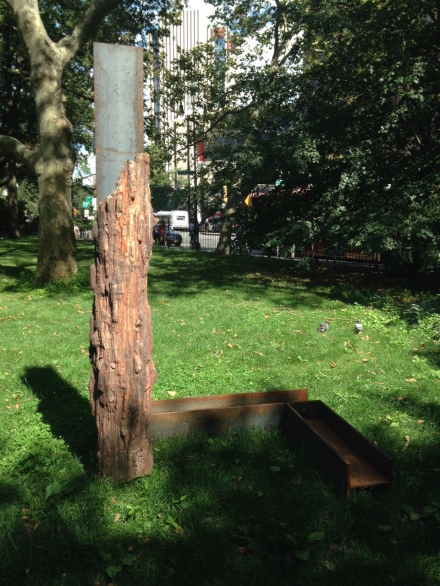 Accordingly, the works of the exhibition are dispersed around City Hall Park, where thousands pass by or pause on regular basis, providing a space that diverges from firsthand understandings of language and pursue unconventional routes for its metaphorical, semiotic, or cultural representations.  Overheard conversations, shouting children and chattering crowds of tourists provide an auditory backdrop fitting for a show so focused on the intricacies of speech and understanding.  Carol Bove’s Lingam, for example, presents a hybrid of petrified wood and four steel beams upon which the vertical log is mounted on.  Replicating the namesake symbol of Shiva, the Hindu deity, the rigid sculpture is a eulogy to the magnitude of icons and their palpable depictions, be that letters, emblems or natural compositions. 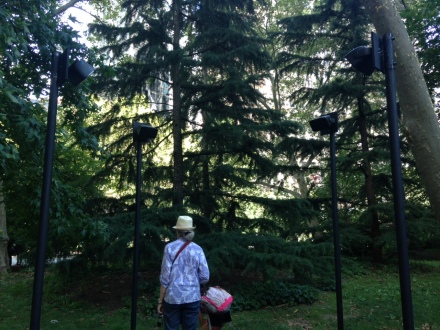 Another visually stunning work is Claudia Comte’s The Italian Bunnies, seven large scale marble sculptures that, thanks to its title, evokes the impression of bunny ears.  For those not aware of the this title however, the sculptures may resemble the letter “U,” or voluptuously abstracted forms. Each one is named after another Renaissance era Italian sculptor, allowing these amiable ears to form a striking pack, ridiculed by the cultural connotation of bunny ears as their somehow cartoonish, quirky presence may imply. 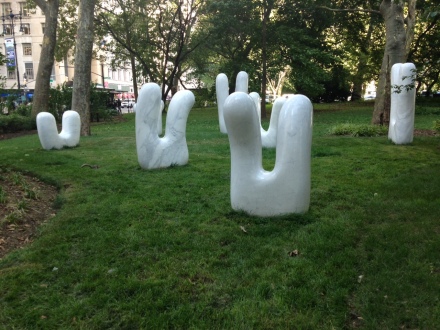 Widely known for his public interventions for which he recruits everyday people, Tino Sehgal joins the exhibition with his first and so far only public orchestration.  In This You, a work that has always been performed indoors since its inception in 2006, includes a female vocalist serenading visitors as they pass through the park each day, from sunrise to sunset.  Whether one is aware of the work’s content or not, passersby relish such a sudden encounter, one which infuses their daily routines and challenges with the logics and aesthetic elements of everyday communication. 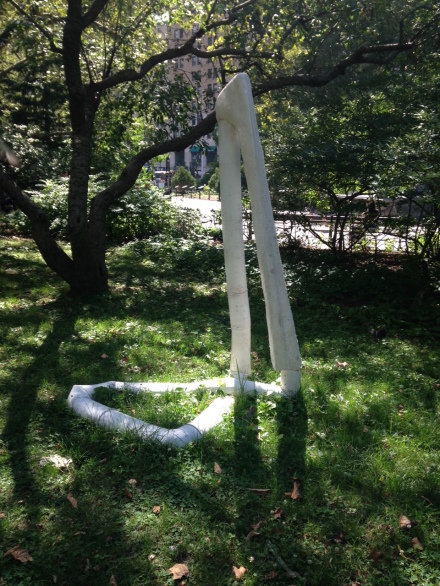 Chris Watson’s Ring Angels, an assembly of four metal pillars each holding speakers on top, invites the audience to stand in the center to enjoy the soothing sound of starlings flocking around the sky, a bird whose natural movements create a massive rush of air, projected around the viewer’s head in surround sound stereo. Given its absence of physical material in conjunction with the work’s vivid sonic character, the work presents a language that maintains a certain foreign nature, fusing into the urban chaos surrounding the park.

This sense of formal breakdown and real sonic contributions to the space, held in conjunction with the momentary texts and concepts presented with the work, offers a fittingly immersive experience in City Hall Park, where visitors can wander at their own pace, or just enjoy the words and sounds rushing past them.

The Language of Things is on view at City Hall Park through September 29, 2016. 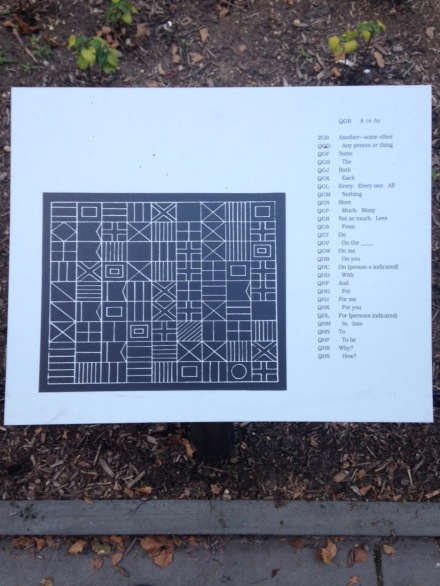 This entry was posted on Monday, August 29th, 2016 at 12:00 pm and is filed under Art News, Featured Post, Show. You can follow any responses to this entry through the RSS 2.0 feed. You can leave a response, or trackback from your own site.