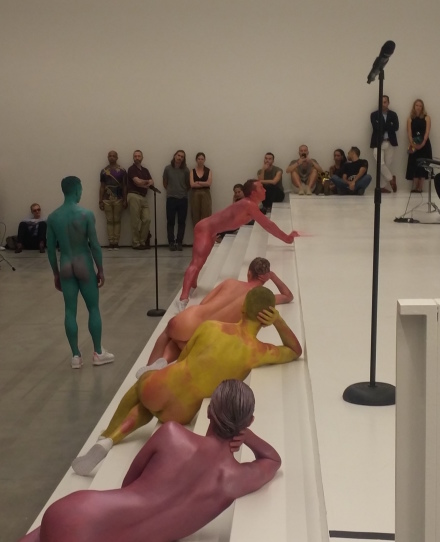 Jeffrey Deitch is back in New York.  Following several years of one-off projects, rumored re-openings and pop-up exhibitions, Deitch touched down at his former space at 18 Wooster for good, kicking off his renewed tenure in the building last week with a series of celebratory performances by British-born Eddie Peake.  The artist, whose neon and glitter encrusted works have long been a staple of Deitch’s exhibition program, brought a fittingly enthused atmosphere to the exhibition, as his work Head left a literal mark on the gallery itself. 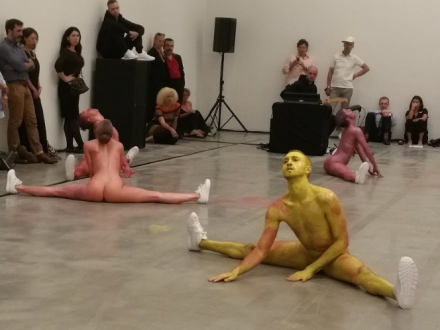 Featuring a group of nude, glitter-clad performers, Peake’s piece can perhaps only be described as a free-spirited romp, as the group grinds and shakes across the floor of the performance space, confronting viewers at times and often dragging trails of paint behind them, or leaving streaks of the material on the space’s white steps.  The entire performance made more acute perhaps by the fact that, other than the paint on their forms, the dancers were completely naked.

Accompanied by a gentle, swelling organ score, and spritely dance rhythms, the work exuded a sort of distended, surreal aura of nightlife exuberance, capped off by the occasional sexual energy of the performer’s swaying movements against each other.  At other moments, the performers would break into tightly choreographed movements made in perfect timing, a fitting counterpoint to the blurs and swirls of paint marking the space almost as if anointing the gallery with the artist’s vibrant energy. 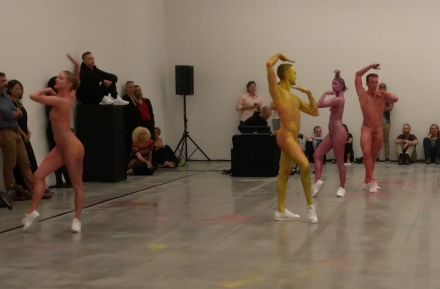 Considering Deitch’s longstanding reputation for enigmatic, freewheeling exhibitions, performances and projects during his last run in New York City, Head was a fitting first entry in his return to his old stomping grounds, a performance that mixed together his engagement with the youthful energy of New York with his own history in the city.  For those in attendance, it was a welcome return to form.

Deitch’s gallery reopens this week with a show of historical works by Walter Robinson.

This entry was posted on Thursday, September 15th, 2016 at 3:16 pm and is filed under Art News, Featured Post, Show. You can follow any responses to this entry through the RSS 2.0 feed. You can leave a response, or trackback from your own site.