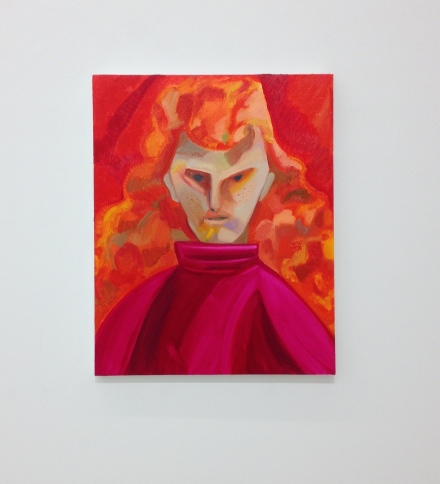 Now through the 29th of October, the CFA in Berlin hosts an exhibition of new work by Dana Schutz, Waiting for the Barbarians, retaining the artist’s prior interest and investment in absurdist and dark humor and pushing it onto new ground.  Where earlier work depicted often surreal or unlikely scenarios, Schutz’s new series is far more concerned with depicting the absurdity of current political and social realities. This is the artist’s fifth solo exhibition with the CFA.In the artist’s view, the lines between fact and fiction are increasingly blurred in American politics and culture, and her large-scale canvases depict this, culling together violent and dramatic scenes  focused on freezing action and presenting it in brilliant and vibrant colors. The images, and the narratives behind them, are often violent to a point of ridiculousness.  And serve as spaces to hold in the processes of time and physical action in a method of re-ordering and understanding their contexts.  In one, a figure is savagely beheaded in an elevator, while elsewhere, a blonde reporter is shot live on camera. In a third, a girl drowning in a tidal wave wears an expression of serene acceptance. 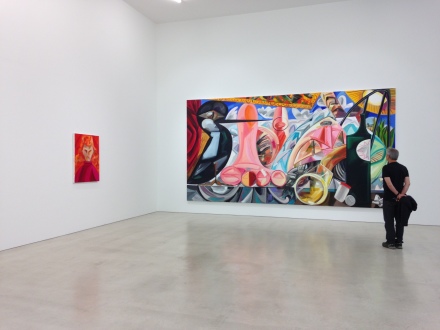 These paintings are not serial but share an atmosphere of unease and discomfort. The title of this exhibition—borrowed from J.M. Coetzee’s novel of the same name—articulates a sense of anticipation and pending disaster that serves as a backdrop to this series. There is an anxiety of the not-yet visible, what approaches, and a close and violent confrontation with grotesque and towering images. 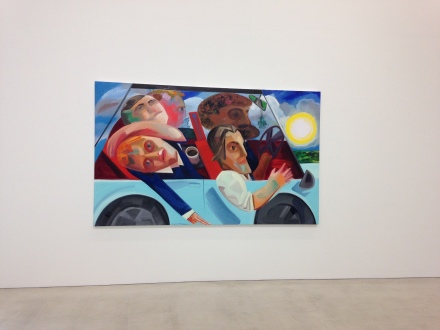 In these images, traditional relationships of scale and content are overturned, with intimate encounters depicted on enormous surfaces, while horrific events are brought together with the most commonplace or quotidian of encounters in far smaller pieces.  Elevators frequently act as a frame for these events, symbolizing the space of encounter with strangers that is at once uncomfortably close and inescapably stiff.  Waiting for the Barbarians seems to tell the story of humanity’s descent into chaotic but ecstatic splashes of color, with characters and bodies stuffed into the frame of the canvas as they seemingly compete for space in these representations. 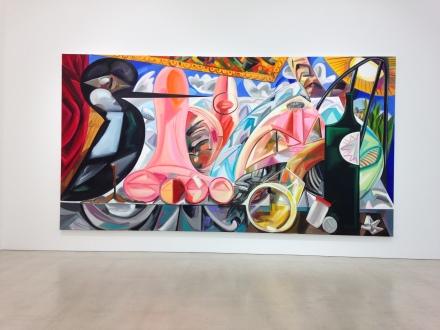 Each of these paintings seems to hold a separate chronology and cast of characters.  The figures in the images stare back at the viewer, inviting and overwhelming in their often unspoken sense of tension.  In this exhibition, Schutz’s work expresses something essentially contemporary about the anxiety of the unknown, a present moment teetering on the brink between a gruesome cartoon and tragic reality.

This entry was posted on Monday, October 24th, 2016 at 12:45 pm and is filed under Art News, Featured Post, Show. You can follow any responses to this entry through the RSS 2.0 feed. You can leave a response, or trackback from your own site.