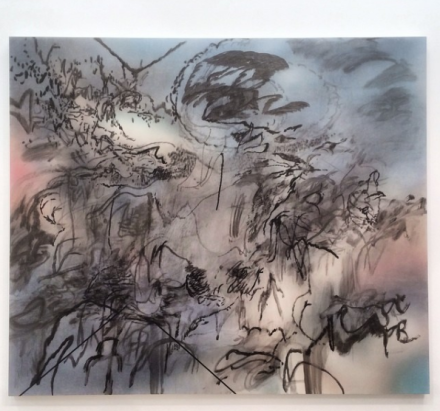 Pushing her particular brand of gestural and highly-nuanced awareness of the picture plane, artist Julie Mehretu’s new exhibition at Marian Goodman in New York is a powerful entry in the artist’s ongoing exploration of abstraction.  Realizing intricate networks of marks, twisting and turning around each other to create swarms and clusters of sinewy, undulating forms, Mehretu’s practice is an ever-evolving study of process in its own right.  Yet her new pieces, showing through the end of the month, present a new sense of both technical urgency and depth of the visual field, combining to create a series of striking new works. 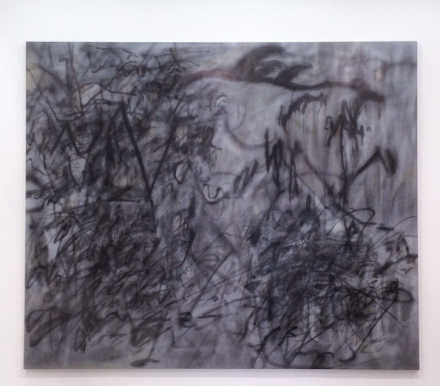 Mehretu’s articulation of the painterly process, allowing each stroke of the brush to take on its own life as it snakes across the canvas, welcomes a careful appreciation of her work in both its singular moments of interaction and in its final form.  As much as they are maps of her work as they are constructed, her pieces equally embrace an appreciation of each gesture.  In past works, this practice played itself out in swirls and whorls of geometric forms, colorful, whirling patterns that gave the pieces an almost graphic air. 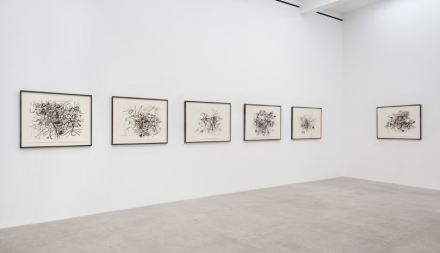 Yet here, Mehretu has abandoned clean shapes in order to double down on the line itself.  Layers of pale black and white lines flurry over the surfaces of the works, often several layers deep, or layered over blurry amalgamations of color.  Her washed-out backdrops underscore a relentless commitment to process, to the careful assemblage not only of her serpentine forms in the foreground, but to the very environment that these images play out against.  One can trace any number of collisions between colors and gestures even in the slightest variations of the work’s backdrop, turning the focus of Mehretu’s work from a mere negotiation of color and shape towards one more concretely centered around time and action. 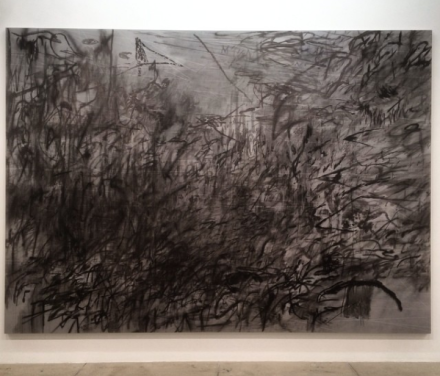 It’s worth noting that the lines used here are distinctly less concrete than previous iterations for the artist.  Her movements across the canvas each maintain some degree of transparency, a point that allows the viewer to more immediately appreciate her strokes on multiple layers of paint while also seeing the interaction between each.  The nearly ephemeral nature of her marks, allowing multiple dimensions of her craft to appear simultaneously, as if the works’ various points of entry should be considered as both separate and harmonious at the same time. 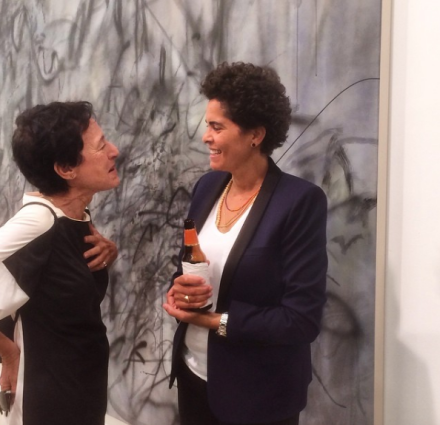 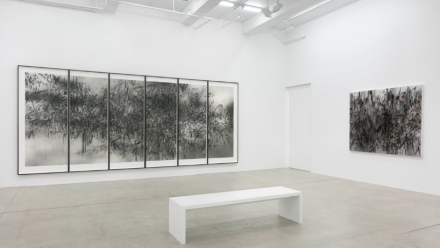 This understanding of Mehretu’s work is echoed in a series of drawings also on view at the gallery.  Boiled down to a more minimal expression of the same concepts and approaches, her small-scale works make the viewer immediately aware of how these elements are designed to work off each other in exchange, leaving a series of marks that swims in and out of legibility.  By a fitting counterpoint, this same approach is again writ large nearby in the artist’s multi-frame etching Epigraph, Damascus.  Pulling real architectural renderings and design elements into the work itself, the artist sets these lines into play against her own graphical meanderings, creating a sense of both the physical world, and the bodies that move through, a fitting metaphor for the act of painting itself.

Mehretu’s work is on view through October 29th. 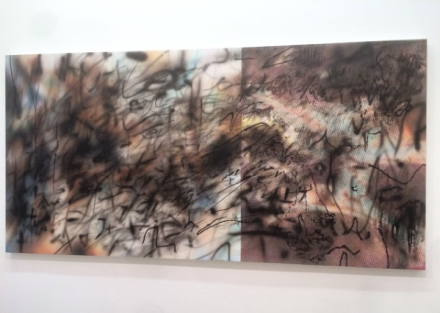 This entry was posted on Sunday, October 23rd, 2016 at 12:45 pm and is filed under Art News, Featured Post, Show. You can follow any responses to this entry through the RSS 2.0 feed. You can leave a response, or trackback from your own site.