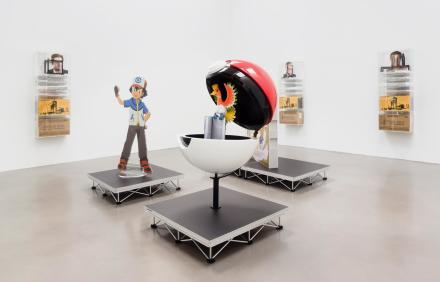 Simon Denny’s latest exhibition at Petzel Gallery is an ambitious investigation into the cryptocurrency Bitcoin and its underlying blockchain technology, delving into the utopian ideals and potential opportunities that blockchain poses, taking on this treatment through an examination of three forerunners of the technology and their visions for the future.

Blockchain Future States follows Denny’s recent installation, Blockchain Visionaries, exhibited at the Berlin Biennial earlier this year.  Using the aesthetics of trade fairs, start-up boardrooms, and gamer culture to describe his complex subject matter.  The galleries are dense with information – like a research paper come to life, and follows Denny’s frequent attempts to visually explain intricate concepts full of financial jargon to an audience that may not normally be exposed to it.

Blockchain database technology has steadily gained traction in the world of finance and technology since it was first conceived in 2008, and used to create the initial batch of Bitcoins in 2009.  It is a distributed, decentralized transaction database with ideals of anti-authority and anti-establishment, seeking to eliminate the need for third parties in transactions through government by people rather than an authoritative entity.  It aims to move away from fiat money through a system of distributed trust, and claims to be incorruptible.  Though its main use currently has been for monetary transactions, it has the potential power to alter the way all of our data is stored, and in turn could create major shifts in the basic aspects of capitalist transactions, and life more broadly, to date.  Records could be publicly owned, not contained in various databases governed by third-party entities, and banks would be eliminated, ultimately dissolving systems of authority. 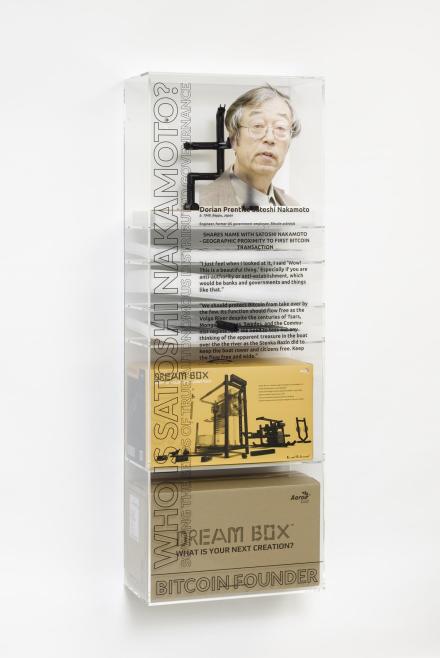 Denny begins the exhibition by taking the viewer through the Bitcoin’s “creation myth” surrounding its mysterious designer “Satoshi Nakamoto.”  Over the years, many have speculated as to who exactly created Bitcoin.  Recently Australian computer scientist Craig Steven Wright claimed the alias as his own, yet other “main suspects” are encased in Plexiglas cabinets equipped with a Dreambox (a DIY kit which allows you to customize your own computer). Denny uses visuals from the game Pokémon, including a blown-up game cartridge, appropriately rated E for Everyone. The name Satoshi is Japanese for Ash, the main hero in the game.  A gigantic Poké ball, made popular this past summer with the release of Nintendo’s augmented reality app, contains a book by Tominaga Nakamoto, an 18th century Japanese philosopher. Nakamoto also happens to be the last name of one of the possible founders – Dorian Nakamoto. The creator of blockchain continues to be a mystery. 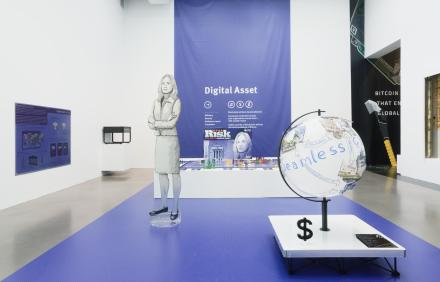 The other side of the gallery contains the installation of Denny’s investigation into the major blockchain players – Digital Assets, 21 Inc., and Ethereum. Each visionary entity comes with their own life-sized leader, a world globe, and game of RISK complete with components, players, game cards, and instructions. The instruction card sheds light into each company’s goals and intentions in using the blockchain technology. Walking through, each seems to top the other in its revolutionary ideas, ending with Ethereum’s futuristic, space-like board and partial removal of the gallery drywall as if the ideas are meant to completely rip out and restructure the environment. 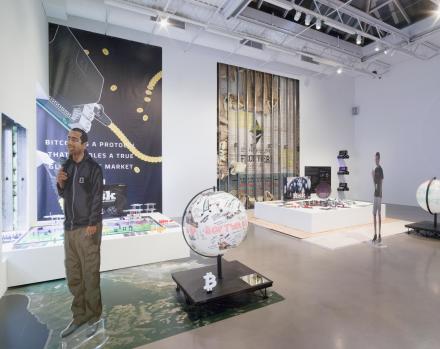 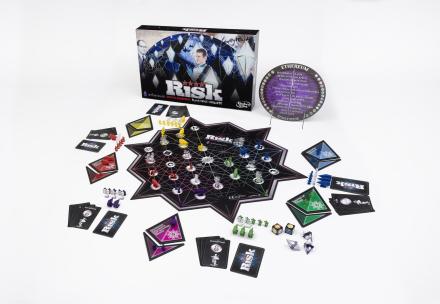 In the very back of the gallery is a short film, akin to an informational, corporate video that briefly introduces blockchain and its possibilities for world change. In addition to each of these elements, Plexiglas cases run along the right wall, showing gravestones screen-printed with the words “disruption,” “geography” and “government.”  On top of the cases sit various representatives of systems and technology that would replace current standards should these visions of the future come to pass. 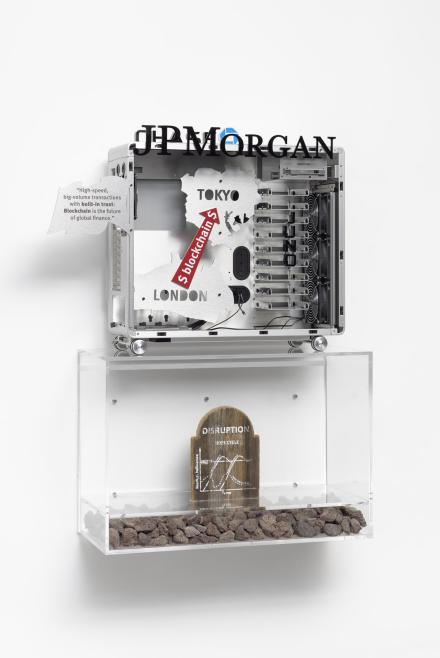 The show is populated with so much information that it can, at times, be a bit overwhelming and difficult to parse, especially if a viewer is new to the concepts and language used.  But this kind of information overload is a part of Denny’s aesthetic, presenting the viewer with a web of information not unlike that which inundates our daily lives.  All of the ideas are there, but he does not make clear how to put them all together, much in the manner that intrigues so many players in Bitcoin today.   The artist has said that he makes “fan art,” so it seems safe to assume that he has a certain level of respect for these ideas and companies, although it is somewhat unclear how he really feels towards his subject matter, or who he sides with in this race to conquer.  Yet this mode of passive observation serves the thematic, and information well, presenting a wealth of perspectives without any need or demand to take sides.

Blockchain Future States is up through Saturday, October 22nd, 2016.

This entry was posted on Friday, October 21st, 2016 at 7:12 pm and is filed under Art News, Featured Post, Show. You can follow any responses to this entry through the RSS 2.0 feed. You can leave a response, or trackback from your own site.