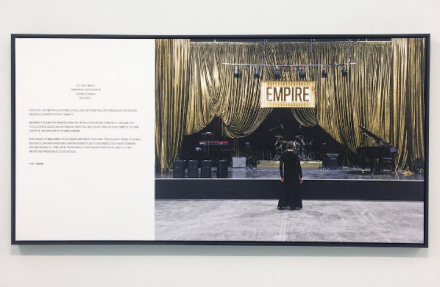 Returning to New York City for her major solo exhibition in the city since her 2014 retrospective at the Guggenheim, artist Carrie Mae Weems has brought a series of new works, spread across a broad range of media and techniques, to both of Jack Shainman’s Chelsea exhibition spaces.  Addressing both the ongoing violence against African-Americans at the hands of the police, as well as threads of cultural peripheries, power and representation in relation to concepts of the image and its performance.  Drawing on diverse threads and themes, Weems’s series of works is a striking orchestration of ongoing themes and thematics in the modern discourse of race in America. 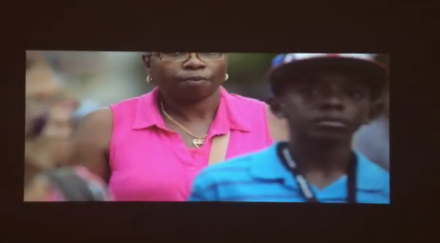 At the forefront of the show is a new series of works, Scenes & Take, which presents Weems’s long-running alter-ego as a black-robed muse, wandering among the set pieces and props of various television programs in contemporary Hollywood.  Each show addressed carries with it a call to modern depictions of blackness in the contemporary film and television industry.  Shows like Empire, How to Get Away With Murder, and others make subtle appearances, paralleled with abstracted scripts that plot struggles, concepts and subject matter that underscore the psychological struggles and politics of representation that undergird each of these images. 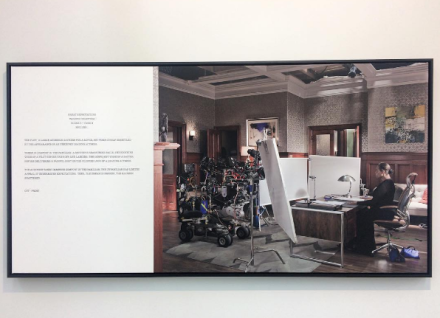 Nearby, the artist has returned to her Blue Notes series, depicting a range of black celebrities in shaded blue tones, contrasted with a series of blocks of clinically rendered primary colors. Presenting relationships between the iconography of modern and contemporary art practice with the photographic reproduction of celebrity and fame, the artist’s dialogue here is a strikingly elegant one, serving as a strong counterpoint her images in Scenes & Take.  Playing on distance to her subjects, and the imagery that ultimately bounds each subject’s relationship to the viewer, her pieces present the manifold acts of participation and representation that function within visual culture.  Hers are ordered spaces, where the viewer’s identification with the humanity of her chosen subjects must negotiate with an aesthetic qualifier that often blots out facial features and identifying characteristics. 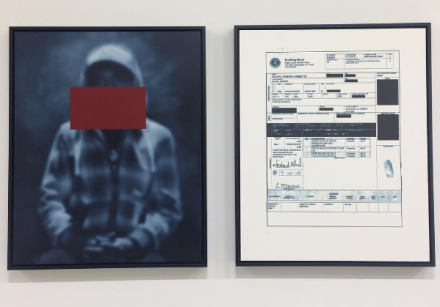 The show continues these threads of representation, performance and visibility at the gallery’s 24th Street location, where Weems is showing a series of powerful condemnations of police brutality on the African-American body.  Joining another series of Blue Notes works are a series of stark pieces presenting the conditions and police files of various police killings from the past years, showing both the situation and the bureaucratic documentation of lives cut short in the face of state violence.  Combined with these works is the artist’s video piece All the Boys, a fitting companion that offers not only a stark emotional underpinning for the documents and images presented, but the visual evidence of the killings themselves.  Moving beyond an attempt at understanding or examining the killings, Weems presents them in all of their numbingly blatant violence, showing one African-American man after another gunned down.  With each image, the viewer must contend with the evidence presented, and the often callous approach of the officers on camera.  There is little room to process, as each image streams past, leaving the viewer with only an awareness of the scale and force of the impact these events leave on the communities they affect. 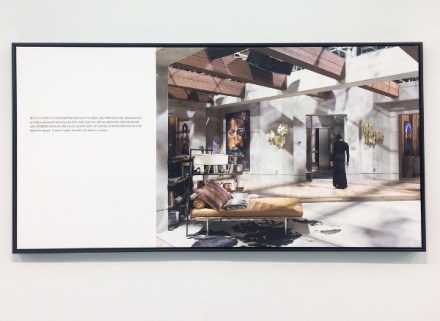 Taken as a whole, Weems’s new body of work runs through a wide range of visual and cultural signifiers, with All the Boys serving as the force that ultimately crystallizes the images and texts around them into a cohesive narrative of modernity.  Delving into the representation of the African-American on camera, as victim of state violence or a beneficiary of modern culture, her works seek to plot and expose the system and makes both visible within the modern American experience, and in turn, how those systems shape the images themselves.

This entry was posted on Tuesday, November 8th, 2016 at 12:16 pm and is filed under Art News, Featured Post, Show. You can follow any responses to this entry through the RSS 2.0 feed. You can leave a response, or trackback from your own site.