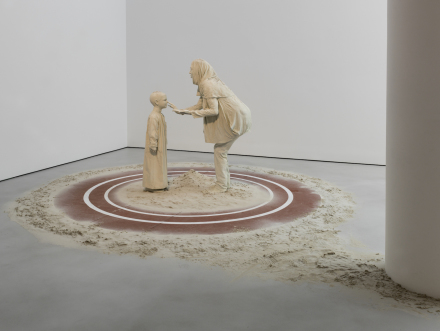 GCC, an art collective tapping on cultural and social implications of change in the Arab Gulf Region, last exhibited in New York in 2014, when MoMA PS1 opened the group’s first American solo exhibition, Achievements in Retrospective, followed by their inclusion in the New Museum exhibition Here and Elsewhere.  The collective, comprised of eight artist-“delegates,” all born or raised in the region, returns to the city for Positive Pathways (+) at Mitchell-Innes & Nash this month, presenting the show’s eponymous sculpture, originally exhibited at the DIS-curated Berlin Biennale this summer, alongside a group of sculptural reliefs created using Thermoforming techniques. 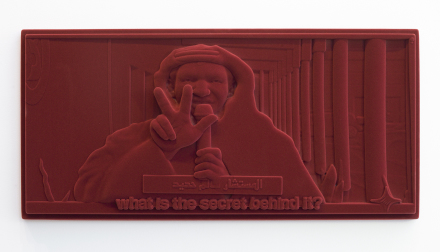 “Positive and negative energy are two different things. You can follow positive energy and be successful,” says the motivational female voice that speaks throughout the gallery space, complementing a sculpture of a young Arab woman in contemporary attire, communicating with her son through the “Quantum Touch” exercise, transferring positive energy without physical connection.  Enclosed by a circular running track, the condensed version of the installation fills the space around the pair with sand, commenting on concepts of positive energy and spiritual exercise movements in Arab countries under the impact of the region’s rapidly growing economic wealth.  In addition to flourishing fascination with Western consumerist habits, this oil-fueled prosperity leads some individuals to seek alternative methods for self-discovery and mediation, movements that arrived in Western countries originally from the East during the ‘90s for the same purpose. 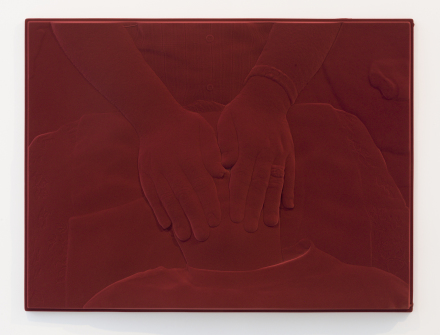 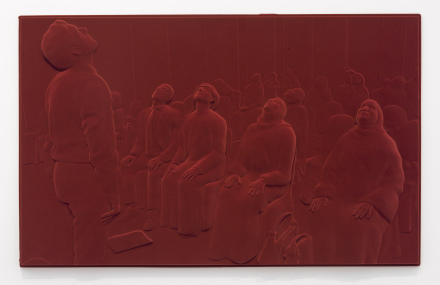 The artists of GCC keep the meanings of their abbreviation loose and open to interpretation, similar to the often sarcastic, open-ended narratives they build on the social constructs of new money and its consequences through “Gulf Futurism” (a term coined by the group founder Sophia Al-Maria to define the region’s transforming aesthetics and cultural vocabulary). Through photography, video installation, publishing, and lectures, the members contemplate newly-acquired lifestyle practices and consumerism exercised in shopping malls, gourmet restaurants, and high-tech gyms in cities like Doha, Dubai and Kuwait.  The motivational, go-getter mood implemented by American corporate system and the rise of Internet aesthetics underscore the presentation of Gestures, a series of Thermoformed plastic sheets depicting Youtube-sourced scenes, in which local politicians and TV personalities rant about positive thinking and its importance for national well-being. 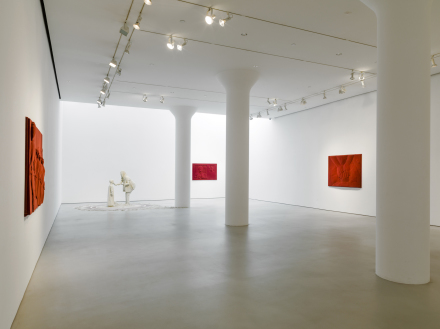 Taken as a whole, this reflection of an abstracted spiritualism takes on a striking new thread in this space, as the increasingly alienated gestures on view are pulled even further away from their cultural grounding, raising questions of comprehension and understanding that the group itself would be sure to leave ambiguous.

This entry was posted on Saturday, November 19th, 2016 at 12:25 pm and is filed under Art News, Featured Post, Show. You can follow any responses to this entry through the RSS 2.0 feed. You can leave a response, or trackback from your own site.