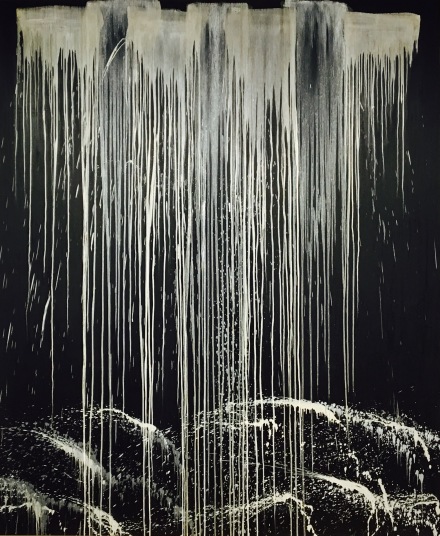 Stepping into Dominique Lévy gallery space, one is immediately greeted by the towering columns of paint that make up artist Pat Steir’s waterfall paintings.  Opening her first exhibition in London in twenty-eight years, the artist’s exhibition features fourteen works made over the corresponding decades, from 1990-2011.  Tracing consistent evolutions in her style and hand in conjunction with stylistic divergences and experiments, the survey engages in an ongoing dialogue over her interests in both control and abstraction. 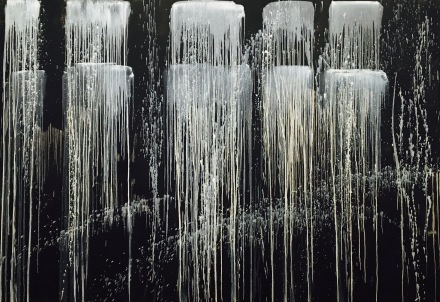 Steir’s work and career developed slowly, as she gradually moved into the field from a position working as art director at Harper Row.  Cultivating friendships and relationships with Sol LeWitt, John Cage and Brice Marden, she would begin to expand on her background in the humanities to embrace a broader relationship to art-making and practice.  Her early monochromatic paintings in the 1970’s were loaded with iconographic symbols, often featuring the motif of a rose, while pushing these images to a point of visual disintegration, much in the same way that Cage explored chance and perspective in the act of art-making and composition. 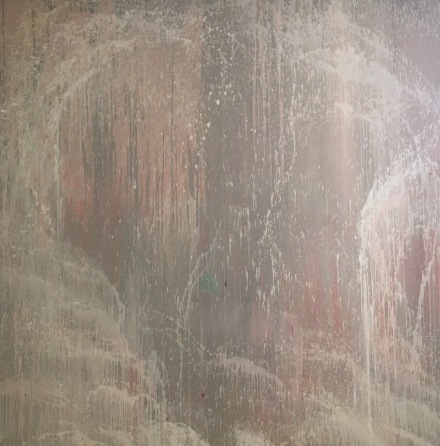 In the 1980’s, Steir would begin experimenting with her iconic waterfall paintings, monumental works that combine elements of chance, gesture, and abstraction through cascades of paint careening down their surface.  While Steir’s work is frequently included in histories of abstract-expressionism in the vein of American post-war history, the artist would argue that her pieces function in a more nuanced vein, working on a concrete relationship to the canvas that also borrows from the natural processes she refers to in the works’ title to render her pieces.

Steir creates these very physical images by pinning an un-stretched canvas on the wall, and while standing on a ladder pushes the paint across the canvas horizontally. The weight of the colors rush down, and either blend with each other when wet or split when dry, allows recessed colors to present themselves.  The pours of paint, and their impressive thicknesses draw on a certain sense of the alchemical, as experiments with turpentine and other materials are used to explore the paint itself in its engagement with gravity.  At the same time, the brush still functions in a traditional relationship between painter and medium, executing the original gestures to activate these systems of operation.  In line with the methods of Agnes Martin, Steir’s work begins with an inclination of the work’s final form, but draws on the act of creation and moments of spontaneity to ultimately finish the work. 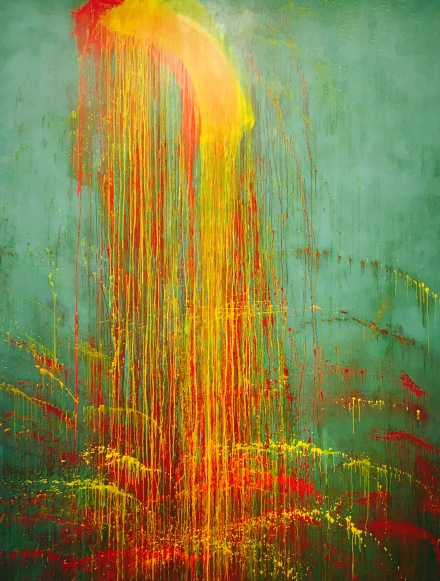 By exploring the technical possibilities of oil paint, Steir flicks, strokes and crosses the canvas with strongly gestural marks, leading to an investigation of spatial awareness that allows dramatic renderings of depth, alongside her formal engagements with color and texture.  Contrasting these works, the artist is also presenting several smaller works, which see Steir drawing on more subdued operations or contrasts in color and line.  The examination of materiality, coupled the lyrical movements of Steir’s brush presents scenes that welcome lingering meditation on their modes of creation, and the vitality of the materials themselves, points which sit at the core of the artist’s work.  This visceral engagement with the surface of the work underscores Steir’s sense of the artwork as a site for both exploration and memory, drawing on repeated actions and the movements of time to create her pictures.

Pat Steir’s work is on view through January 28th.

This entry was posted on Sunday, January 1st, 2017 at 12:23 pm and is filed under Art News, Featured Post, Show. You can follow any responses to this entry through the RSS 2.0 feed. You can leave a response, or trackback from your own site.