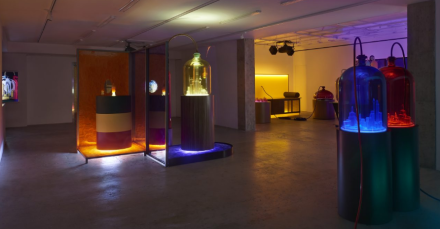 Venus Over Manhattan is currently presenting a curated review of Mike Kelley’s work in the Kandor series this month, exploring the artist’s work and research into the comic book mythology of Superman, the implications of his origin story, and the broader cultural and psychological frameworks that this story works within and through.  Selecting four of the artist’s works in the series, the show takes a meditative, focused perspective on Kelley’s expansive body of work. 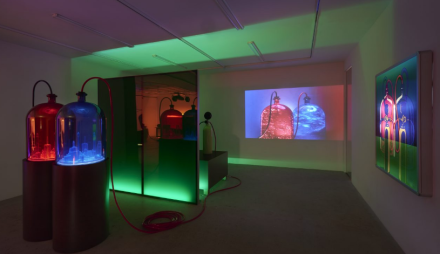 The legend of Kandor figures prominently in the mythology of Superman.  The capital city of the hero’s fictional home planet, Krypton, Kandor was shrunken down to miniature scale by his foe Brainiac, then won back during a fight on Earth.  Superman’s relation to this abstracted home is a strikingly powerful one, presenting the idea of a home he could easily view, but could never revisit, left with a constant reminder of his life and alienation from his origins.

This intersection of memory and trauma, violence and pop culture, leaves little wonder as to why Kelley would be so interested in Kandor as a format for exploration.  The miniature cities have appeared frequently throughout the Superman comic book series, always emphasizing Superman’s sense of alienation and forced removal from his original home.  Presented in the pages of a serial comic, the sense of death and destruction, diaspora and absence that the city serves as a symbol for, takes on a fittingly graphic, imaginative mode of memory construction and substitution, points that Kelley frequently explored in his career, perhaps most notably in his Educational Complex series, constructing the sites of his childhood education as a way to both mine and archive his own memory while delving into his memory for potential sites of traumatic experience. 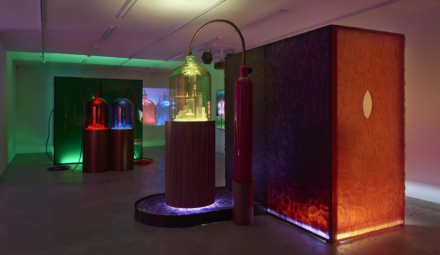 Similarly, the works see Kelley exploring a sort of group memory through the continued contributions of varied illustrators and graphic artists working on the Superman series over the years.  The city has changed forms and designs frequently over the course of the comic, as each artist took their own artistic embellishment on the city inside the Fortress of Solitude.  As a result, the changing grounds and shapes of the city became as interchangeable as the cultural framings that they worked within, a point that Kelley used in his own approach.  Creating a number of his own Kandor works, the artist traced and reinterpreted the city’s varied design points and approaches, allowing the ruptures in architectural consistency formed by over 50 years of comic books to serve as a continual generation of new modes and renderings of the city.  Much in the same way that the artist’s work sought ways to incorporate the functions of memory and experience into his own works, the Kandors served as a fitting case study in how cultural modes both preserve and reshape shared ideas and concepts. 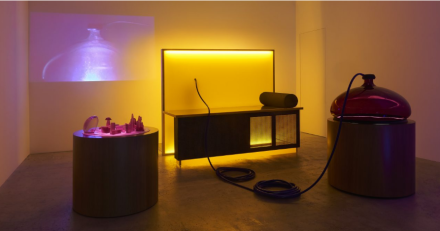 Presented here, Kelley’s Kandors offer a taste of the expansive nature of his project, presenting not only the sculptural objects, but also the large-scale lenticular works that the artist created from the cells of the original comics, as well as video works depicting swirling clouds inside the Kandor domes, speaking to the formal variations and shifting nature of both Kelley’s project, and the image of Kandor itself.

The exhibition is on view through January 28th.

This entry was posted on Friday, January 27th, 2017 at 12:39 pm and is filed under Art News, Featured Post, Show. You can follow any responses to this entry through the RSS 2.0 feed. You can leave a response, or trackback from your own site.