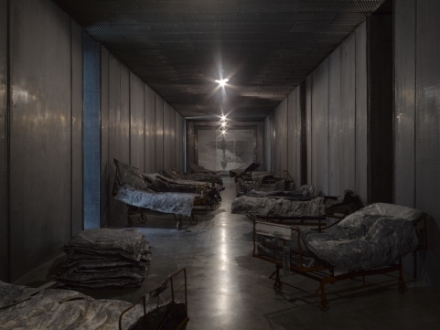 Walhalla, Anselm Kiefer’s latest exhibition at White Cube Gallery in Bermondsey, is a dark, thrilling, and sinister rendering of war and destruction. The show’s title, drawn from Norse mythology, and referring to the final resting place of slain heroes as they were received by King Odin, is scribbled in charcoal above the entrance. “Walhalla” or “final place of rest” is also the title of a neoclassical hall commissioned by Bavaria’s King Ludwig I in 1842, built to honor men of great repute.  Kiefer, for his part, honors not just historical figures, but found objects in tandem, marrying unreality with the show’s surreal juxtapositions: a bed sinks under the weight of a winged boulder; a lightening bolt strikes a bullet-hold wheelchair; a spiral staircase, adorned with rusted dresses, leads to an ambiguous destination.  Notions of mythology and reality are interwoven to provide an intriguing, albeit challenging, spectacle to behold. 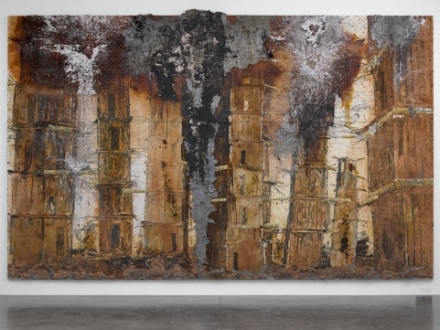 From the blinding brightness of the gallery’s entrance, to the sombre, lead-walled exhibition, Walhalla makes an instant impression on the viewer.  The show’s titular installation is placed in the central corridor, and presents itself as a hospital ward of sorts, with two rows of steel-framed beds.  The mattresses and sheets are made of oxidized lead, battered to give the impression of having once been occupied. At the far end of this seemingly interminable space hangs a large monochrome photograph of soldier, receding into an uncertain distance. The painting carries a certain delicacy, like a nineteenth century Romantic painting, providing a point of contrast with the early twentieth century bed frames and their industrial stasis. A sign tells the visitor not to touch the artwork and, if contact is made accidentally, to wash their hands immediately and thoroughly.  Something about the pieces themselves – the melancholy of absence, the lighting sparse and cold – repels the need for touch.  Hostility presides over hospitality, the beds devoid of the illusion of comfort. The walls are also covered with lead, meaning that everything seems to be leaning inward, oppressing the viewer. 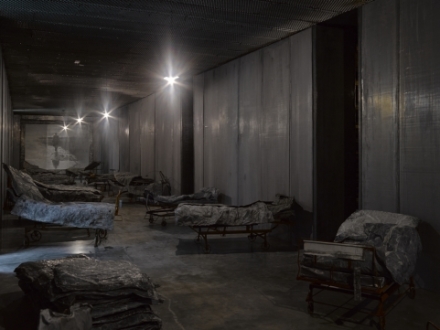 While the majority of the works on show are in the same lead monochrome, several large-scale canvases surprise the viewer with unexpectedly potent color. Depicting stacks of what appear to be industrial containers devoured in flames, the blaze provides a feeling of warmth with its employment of reds and ochres.  As one stands before these paintings, the confusion of its imagery, whether fire, fireworks or other, more violent explosions, strengthens the sense of subverted images running through Kiefer’s internal universe, a balancing act between certainty and uncertainty.  Placed at the conclusion of the show, the sudden burst of light and the sheer scale of the canvases creates an incendiary conclusion to the show’s narrative trajectory. 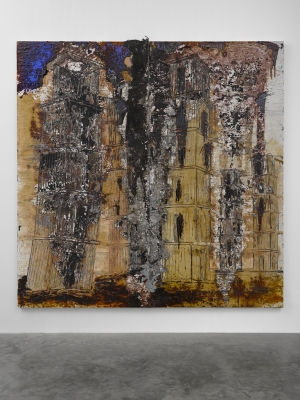 The show also features a series of vitrines in the largest room, containing objects presented, in some sense,  ancient artifacts.  In each, dried pieces of strange, gnarled plants, rusted clothing, and fragments of slate and rock allow an extended sense of the earth as both rarified space and decaying material. As an artist whose work is mostly informed by the history of Germany, his native land, Kiefer portrays history itself as a material, to be formed and abused, malleable like clay.  This motif runs throughout the exhibition, and centers around acts of unearthing; of a past brought back for contemplation, both pliable and dangerous in its presence. The exhibition encourages the viewer to re-evaluate ideas constantly, enabling it to assume a disconcerting timelessness.

The show is on view until February 12. 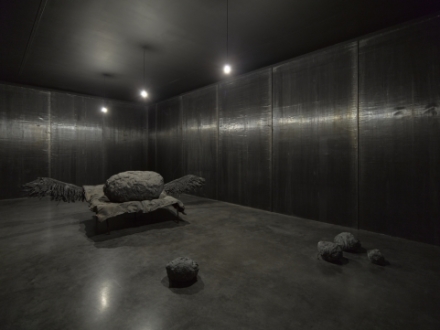 This entry was posted on Wednesday, February 8th, 2017 at 5:23 pm and is filed under Art News, Featured Post, Show. You can follow any responses to this entry through the RSS 2.0 feed. You can leave a response, or trackback from your own site.