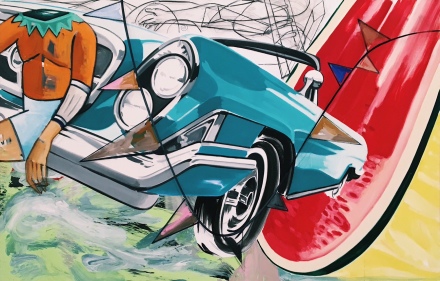 Embarking on a range of highbrow pastiches drawing from 1950’s Americana, flashy cars and bright colors, painter David Salle continues to reinvent his unique sense of the postmodern, and the craft of painting in the contemporary era, taking over Galerie Thaddaeus Ropac’s Paris Marais exhibition space.  Working through a series of paintings on canvas and paper, the show welcomes a renewed perspective on Salle’s combinations of culture, color and gesture. 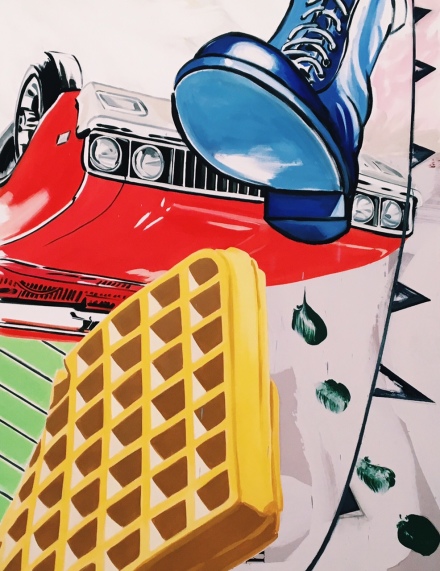 Born in Oklahoma in 1952, Salle currently live and works in Brooklyn, New York. After receiving both undergraduate and graduate degrees from the California Institute of the Arts in the 1970s, he moved to New York, finding critical acclaim in the 1980s as a leading figure in the Neo-Expressionism movement, pulling his own approach back towards figuration.  He is noted in particular for his signature style of montage, where he juxtaposes seemingly random images to fashion a hyperreal notion of modernity, an approach that finds a renewed vigor here, with a vibrant color palette highlighting dynamic movements and overlapping forms. 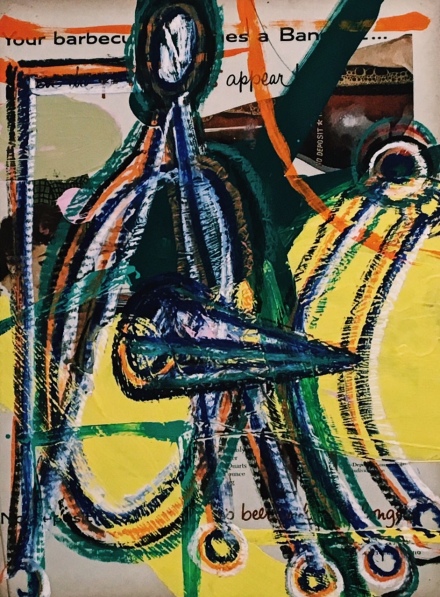 Connecting elements of photography with painting, Salle creates disjointed landscapes in which each of his colorful components mingle, finding a balance between positive and negative that constantly seems disrupted or troubled by his assertive, culturally evocative shapes.  The fanciful, even humorous effects of animated objects, figures and scenes confront the media-saturated society we live in through its sense of expedient, almost chaotic physicality, ultimately establishing an excitable mood in which to examine the relationship between objects, their environment and the viewer.  With a keen awareness of gaze and the ability to use abstraction as a device for exploring the psyche, Salle refers to magazines, pornography and popular culture to create a collaged landscape. 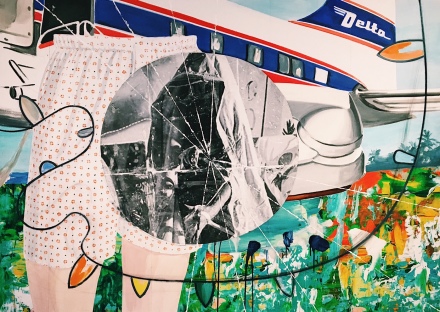 The main gallery floor features large-scale paintings, many of which draw inspiration directly from 1950’s Life magazine covers, imagery from his childhood that Salle recreates and inserts into his canvases in an almost cartoon-like manner, bursting with shifting lines and dense layerings of form.  concepts of memory and repetition are prevalent, as well as a desire to define and explore a generation of visual iconography in a single image. With a surrealist inclination of simultaneously portraying multiple scenes and languages of popular visual culture, Salle’s work reinforces a fluid, transformative narrative. 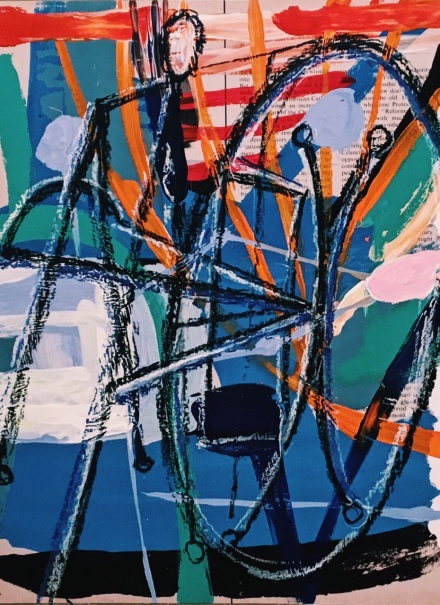 In the upstairs gallery, the exhibited works are smaller in scale, often using a more rough gestural approach that emphasizes their freely flowing, seemingly collaged materials.  Highly playful, references to sculptural proposals or even architectural sketches create an impression of works in the midst of their own realization, featuring bold spatters of paint and soft lines that stand in stark opposition to the more hard-edged pieces downstairs.  A main motif that arises throughout this new series is inspired by the gestural form present in Picasso’s Project for a Monument to Guillaume Apollinaire (1928). Created in honor for his late friend, the sculpture suggests a standing figure with arms outstretched.  The linearity of the metal rods in Picasso’s work is now reinterpreted in paint by Salle, imbuing art historical themes and a subtle sense of situational irony into his work.  This thread, running through much of the the show, sees Salle in the midst of recreating and expanding his style once again.

This entry was posted on Friday, February 24th, 2017 at 6:57 pm and is filed under Art News, Featured Post, Show. You can follow any responses to this entry through the RSS 2.0 feed. You can leave a response, or trackback from your own site.