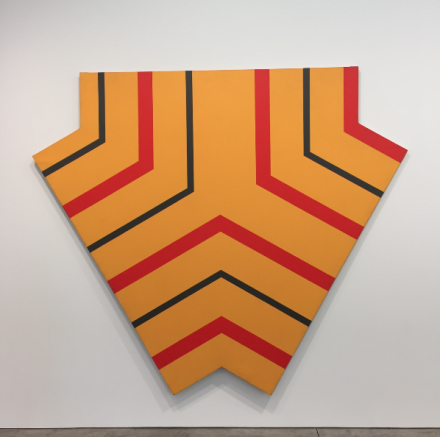 Artist Jeremy Moon had worked for a little over a decade when his life was tragically cut short by a motorcycle accident in 1973.  Yet the artist’s work during this short period, the subject of an exhibition at Luhring Augustine’s Bushwick location this month, offers a striking fusion of the era’s painterly and conceptual thematics, combining serialism, minimalism, shaped-canvas painting, colorfield painting and abstraction into a colorful and often commanding body of work.  The gallery, which recently announced its representation of Moon’s estate, presents an introduction of a practice that stands out for both its stylish fusion of techniques with a precise sense of both critical discourse and practiced technique. 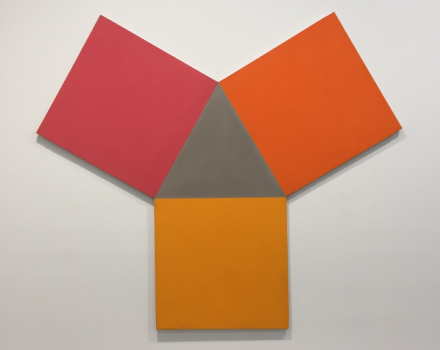 Through minimal gestures and a careful attention to color and form, Moon’s works offer a playful variation on the canon of post-War abstraction.  Utilizing simple gestures and ample negative space, the painter’s approach to the canvas allows him to create deeply immersive systems, pulling the viewer’s eye into alternating lines and subtly illusive formal arrangements.  His piece Signals, for instance, draws on both the jagged symmetry of his shaped canvas and the alternating patterns of lines stretched across its pointed edges.  Mixing up the patterns of red and grey lines based on position and proximity to each edge, Moon’s works create a sense of internal rhythm from his spare elements, a theme that seems to echo throughout the show.  Other works, like At Midnight (1965), apply a similar approach towards a more nuanced engagement with just color and brushstroke.  Playing simple curved lines against a deep blue backdrop, the artist’s work riffs on the language of design in the same breath as that of serialist painting, exploring a shared language Moon’s previous work in the advertising field was surely informed by. 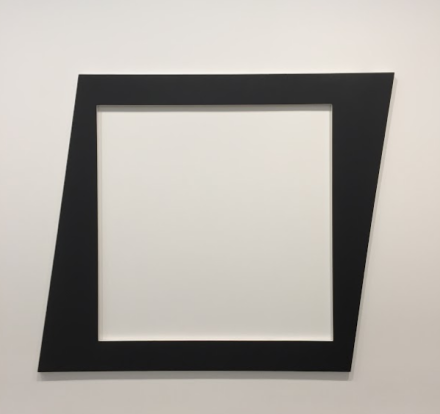 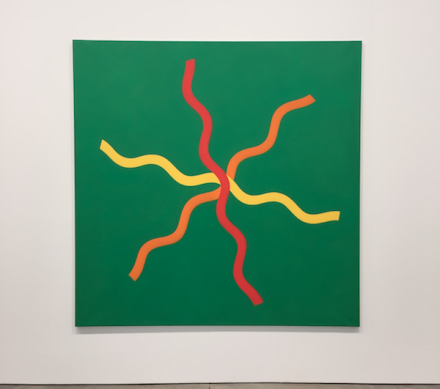 The artist’s sense of the exchange of space, of negotiations between foreground and background, informs much of his work, often playing on the act of seeing as a fundamental aspect of his practice.  Orangery (1965), for instance, draws on the language of color field painting, filling the canvas with a warm orange hue, yet equally acts to disrupt the act of viewing through a series of polka dots spread around the perimeter of the canvas.  Moon forces the viewer’s eye into a continued exchange between these two forms, allowing not only color and shape to work in opposition, but equally to examine parallel modes of painterly practice, setting color field painting against the language of serialism.  A similar operation dominates his piece No 4/72 (1972), where the artist’s slender shaped canvas bounds a large square of wall space, ultimately creating a coy nod towards the discourse of framing and perception that stemmed from the conceptualist project, yet twisting it through a different lens.  His piece, which negotiates between the canvas and the wall space on either side, is a striking emphasis on the artist’s impressive awareness of his own materials, as well as the modes of thought that surrounded them.

Offering an impressive look at the artist’s broad language and interrogation of his work’s context during the 1960’s and early 70’s, Luhring Augustine’s exhibition is open through April 15th. 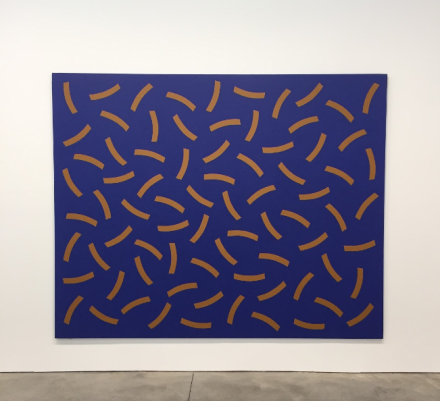 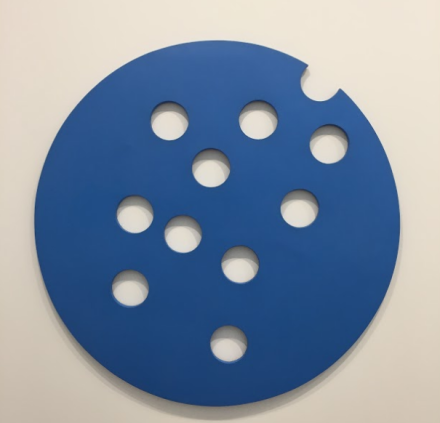 This entry was posted on Saturday, April 15th, 2017 at 1:35 am and is filed under Art News, Featured Post, Show. You can follow any responses to this entry through the RSS 2.0 feed. You can leave a response, or trackback from your own site.