Venice – Anne Imhof: ‘Faust’ at the German Pavilion, Winner of the Golden Lion for Best Pavilion at the Venice Biennale Through November 26th, 2017 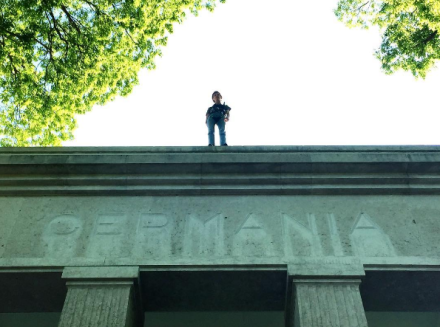 Images capture. They calcify. Within space and time, images appear to sustain a frozen existence with a kind of false grace that suppresses the perpetual change and motion that could be posed as all that which, for lack of a more concise term, is not the image itself.  The dialectic between motion and image, fluidity and representation, is the central conflict of Faust, Anne Imhof’s Golden Lion-winning performance for the German Pavillion at the 57th Venice Biennale. 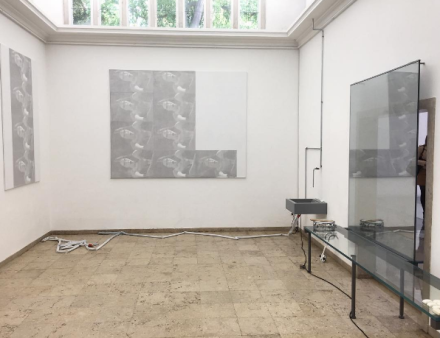 The title is taken from Goethe’s epic of the same name, from which the phrase “Faustian bargain” has come to mean an exchange of one’s soul with the devil for fame, youth, wealth, power. In Imhof’s adaptation of the German epic, the riches of the world are exchanged for human connection, erotic or otherwise. The performers, aged anywhere from their twenties to mid-thirties, move and writhe about the space, moving under and over glass flooring that seems to both extend and limit the ability for the audience to engage with their actions.  Connections seem constantly at odds with consummation, creating an atmosphere charged with waste and excess and aborted sexuality, projecting an abject loss of faith that led at least one viewer to describe the pavilion on Instagram as “apocalyptic.” 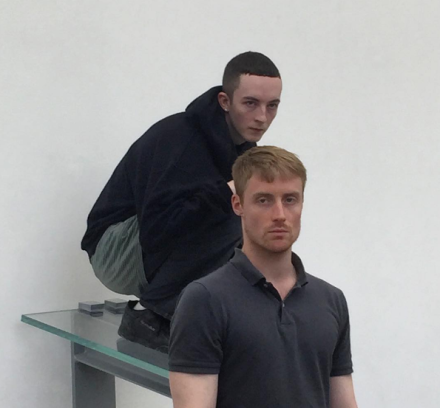 That term may or may not have also been a way of saying “late capitalist,” which the show’s catalog suggests the pavilion represents.  In Imhof’s capitalist-Hell, the protagonists are at once hyper-capable of signaling this desire, but they remain unsatisfied, incorrigibly celibate, unable to receive.  Both performatively and biographically, represent aspirational icons from a mythologized international art world, populated by Balenciaga runway models and regulars at European techno clubs, narratives of luxury that propel an entire industry of corporate advertising aimed at the world’s 18-35 demographic. They represent a global Western elite that can only exist within the conditions of capitalism, and might structurally and aesthetically serve as justification for capitalism.

It’s during the moments when Imhof interrogates these mythologies where Faust is most successful, particularly when questions of gain and loss are factored into the audience’s experience and response.  Perhaps the most effective explanation is a view of boredom is the supreme luxury. Heightened to its utmost extreme, boredom in the dancers’ faces registers as a vacancy in the eyes, or a sleep deprivation approaching clinical emergency. It is the body’s manifestation of “angst,” both the title of Imhof’s previous performance, as well as the Lacanian term for a person’s psychic state when approaching desire that will never be (and structurally cannot be) fulfilled. 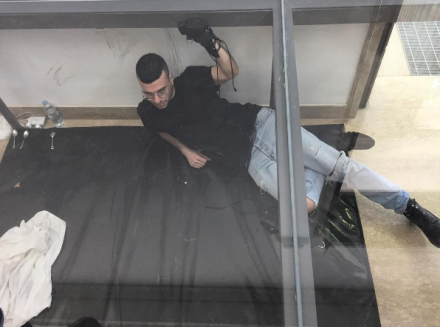 Throughout the duration of Faust, dissonant compositions and minor-key vocal performances play over the speakers, both live and recorded, which borrow from genres ranging from musical theater to noise, indie pop to techno. Dancers wrestle with each other, turn their backs to one another, face each other in sidelong glances as if inhibited by guilt. Certain gestures signify absolution: arms open wide; or dominance: standing erect over another’s body crouched on glass. In the conditions of competition for limited resources, intimacy is precluded. In isolation, a body writhing within a circle of detached onlookers comes to embody a masturbatory posture as the only exercise to release. 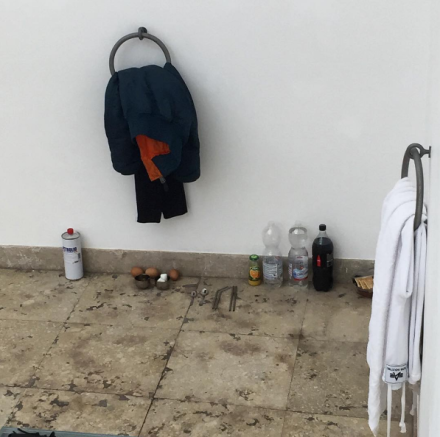 Several times during the performance, the dancers lock eyes with members of the audience, but show no recognition. They appear “soul-less,” as bodies that once served a function, but have now been drained of their use-value. Are they survivors or the undead of capitalism? Styled by lead performer Eliza Douglas, the dancers are outfitted in generic “athleisure”, once-functional garments taken out of context and worn as decoration. Even the props they toy with—towels, beds, slingshots—aren’t used for their function, but as objects of amusement.

Yet the irony here is that by severing the body from use-value, a kind of afterlife emerges in which the body enters a new zone of evaluation based solely on aesthetics. The human body becomes abstracted beyond purpose, beyond utility, to the point where its very significations are allowed to equivocate and pool around a variety of erotic associations.  As viewers try to capture images of these performers and actions, they further fragment the space into a sea of cameraphones, breaking the space into a prismatic dissection of the action itself, and further rendering the body as a space for both personal negotiation and representation.

Several writers along with Imhof herself have been eager to describe Faust as “post-gender.” The sexuality in Faust may or may not be considered “post-gender,” though the breakdown of gender suggests a sexuality removed from procreation; and one of the major tenets of queer sexuality is that by circumnavigating procreation. Queer sex can undermine the nuclear family, which is the bedrock of capitalism. For if the body has been rendered useless, then it can be no more than “a body, and it is the body in Faust that provides the only space for any kind of human agency. While the dancers seem trapped within the space, “as if it were one of the centers of financial power,” writes Susanne Pfeffer in her catalog essay, they move in and around and atop the pavilion as a way of asserting a kind of immanent agency. Almost every surface of the pavilion is used as a site for occupation. Ahead of the performance, Imhof had the main hall of the pavilion divided into two spaces, separated by a horizontal glass floor. Dancers moved on top of the glass, amongst the viewers, and below the floor, where viewers could watch dancers move beneath their feet. 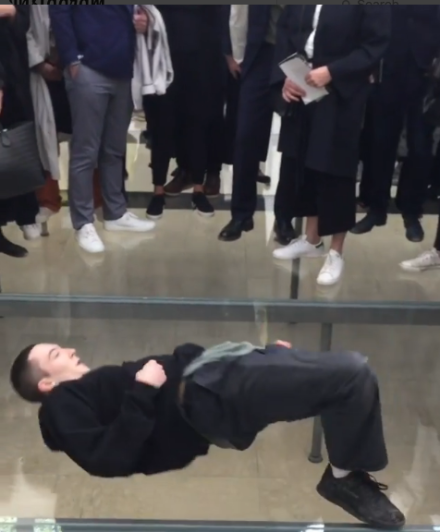 But the tension is never relieved. The dramatic contribution of Faust is the enactment of the master-slave dialectic between the self and the system, the individual and the state, but without the promise of consonance, leaving the play’s finale at an impasse at best. One performer, standing on top of the building’s cornice, suggests either a conquering or a surrender, as the gesture simultaneously connotes a victory or an intention to jump. Towards the performance’s finale, one performer marches and shouts throughout the pavilion as either a cry of rebellion or of defeat. In this way, one is reminded less of Goethe’s Faust and more of Wagner’s Tristan und Isolde, in which the lovers’ sexual abnegation, in harmony with the composition’s tonal dissonance, is stretched throughout the entire five hours of the opera.

But unlike Tristan und Isolde, Imhof’s performance doesn’t follow a dissonance-consonance structure along a chronological narrative. While Faust does have a start and finish, it is designed for viewers to come in and out, catching only fragments at a time, which resists the authoritarianism of the traditional Gesamtkunstwerk. Images of the performance show, at best, ambivalence. They reveal performers fighting with one another, or alone in some corner looking dead in the eyes. But if a strategy for emancipation can be found in Faust, it might be mapped from the collective motion distributed across bodies, taking the building captive over the duration of the performance. In fact, one’s impression of Faust may even conflate several memories at once, as if all of the dancers’ motions are happening simultaneously, and the pavilion appears as if it’s under siege. Armies attack the building, climb the gates, swing beneath the floors, knocking and pounding and shouting throughout the pavilion and lighting the walls on fire, climbing on top of the roof, and jumping over one another in choral ecstasy. Through repeated motion, they could be tracing fractures within the institution until exacerbated beyond repair. The building could very well be on the verge of collapse.

This entry was posted on Monday, June 26th, 2017 at 12:30 pm and is filed under Art News, Featured Post, Show. You can follow any responses to this entry through the RSS 2.0 feed. You can leave a response, or trackback from your own site.