London—Adrián Villar Rojas: Untitled from the series ‘The Theater of Disappearance’ at Marian Goodman Gallery through July 21st, 2017 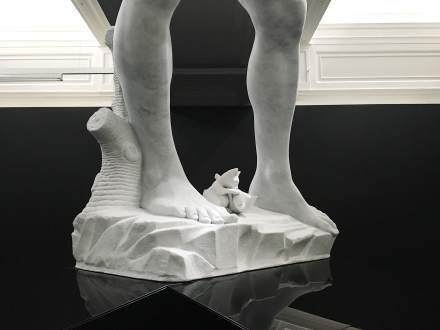 On view through July 21st, Adrián Villar Rojas’ Untitled, from the series ‘The Theater of Disappearance’ transforms the first floor of Marian Goodman’s London gallery space from a white-washed, airy viewing space to a room devoid of any natural light. Running concurrently with exhibitions of the same name at the Metropolitan Museum of Art in New York, the Kunsthaus Bregenz in Austria and the NEON Foundation in Athens, the London exhibition is an immersive display. Like the parallel exhibitions, Marian Goodman Gallery features a new site-specific work which wholly claims the exhibition space, changing the domain of perception and creating a rupture.

Born in Argentina in 1980, Adrián Villar Rojas has risen to prominence over the last few years for his large installations and his thoughtful consideration of materials. Questioning the reliability of time and its supposed linear nature, Adrián Villar Rojas challenges notions of memory, humanity, culture and history. The  heart of his practice revolves around the exploration of man’s very existence and seemingly imminent obsolescence. His works exist as a sort of conflation of history and science fiction, of art and culture— in looking towards relics of the past he constructs an unknown future. Through the convergence of contemporary cultural icons and emblems with objects traditionally held in museums he recreates history, conjuring an indistinct time, all while bridging the gap between past, present and future. 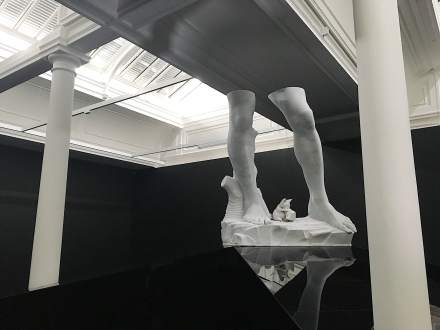 An exhibition of Adrián Villar Rojas’ work exists as an almost fabricated truth, a twisting of narrative in which each viewer can project their own experiences and histories onto. His dream-like fantasias operate in a new realm, a parallel dimension so to speak, in which time is minimized and there is ample room for reflection. Featured in the center of the Marian Goodman gallery space is a life-size marble reproduction of the legs of Michelangelo’s iconic David. Placed atop a black, reflective ramp, the sculpture is literally elevated on a pedestal. Magnificent in scale, the work is strategically cut off before David’s genitals, creating a fissure in his identity. Additionally, the marble for this contemporary reworking was mined from the same quarry that Michelangelo used, lending to a sort of dissonance in authorship as the only recognisable difference between Adrián Villar Rojas’ work and Michelangelo’s is the inclusion of small cats.

Nestled at David’s feet are playful, kitsch cats, which add a contemporary dimension to the work while also creating a rift between the original sculpture’s traditional origins and contemporary art historical and popular cultural references. Through a modern reworking, Adrián Villar Rojas has refashioned one of the most beloved works from the Italian Renaissance (and Western art history at large) into a Post-Modern object of kitsch. Questioning the legacy and stability of ‘David,’ Adrián Villar Rojas’ Untitled makes a deliberate break with the traditional canon, while simultaneously opening a new dialogue regarding the linear recording of history and fostering an ongoing conversation about a past work. As ‘The Theater of Disappearance’ spans multiple venues, all in different countries, the project continuously reinvents itself and challenges the established parameters in which to view and understand the objects of history that Adrián Villar Rojas is re-appropriating. 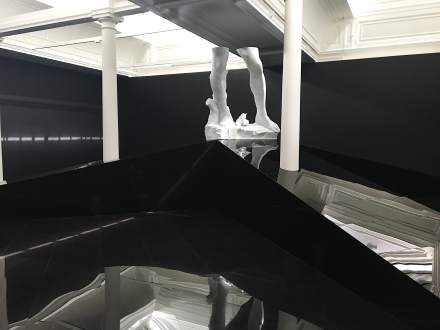 While the expansive nature of the project raises discussion surrounding the objects of display, it also examines each exhibition space’s function, particularly as the work is presented at both commercial spaces and more educational or academically-geared organisations. While the other venues hosting ‘The Theater of Disappearance’ are museums or foundations, Marian Goodman Gallery is rather a commercial art gallery— even with its reputation for presenting museum quality shows, it is still very much concerned with sales. It is interesting to look towards the different treatment of installation, for Adrián Villar Rojas is acutely aware of the conditions of each venue and deliberately and wilfully plays with the space accordingly.

While the Metropolitan Museum of Art’s rooftop and the Kunsthaus Bregenz’s space are left to be openly flooded with light, Marian Goodman Gallery’s first floor has been claimed by the installation and rebuilt into a dark and mystifying realm. The artist has literally disrupted the gallery space, going as far to cover the light-toned wooden floor with slick, black tiles. The usually beautiful and calming space has been intentionally fragmented. In addition to an aesthetic departure, the placement of the ramp and temporary walls has led to a practical and functional disruption as well. Where previously the gallery staff (and viewers) could walk freely through the space, their path is now physically blocked, forcing individuals to reflect on their passage and move accordingly. In this sense there is a certain performative quality to the work, in which those present are forced to actively engage with it. 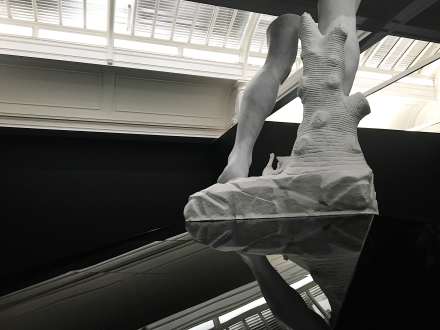 Additionally, the overall project continues to reimagine itself in each new environment, acting simultaneously as a part of a matching set and an isolated and dislocated work. As in many ways ‘David’ has been torn from his historical home, in regard to both his location and time, each exhibition venue features a revised narrative of the same tale. If in the scheme of human existence the apocalypse is near, history in a sense will converge into a single moment. In 10,000 years from now would symbols of the Italian Renaissance, Post-Modern emblems of kitsch and an artist’s vision in 2017 seem all that far apart? Through a carefully curated selection of historical objects, Adrián Villar Rojas confronts the record-keeping of human culture and the segregation of time and place.

This entry was posted on Thursday, July 13th, 2017 at 2:28 pm and is filed under Art News, Featured Post. You can follow any responses to this entry through the RSS 2.0 feed. You can leave a response, or trackback from your own site.