Freedman Fitzpatrick, while hosting a fairly international roster, is one of the most representative galleries of the current Los Angeles landscape. Located in a strip mall off Hollywood Boulevard, its neighboring businesses are a Domino’s Pizza and a 7-Eleven.  With that in mind, it may seem that in pairing with Off Vendome for CONDO, Freedman Fitzpatrick has foregone their penchant for non-traditional gallery locales. In a four-person exhibition comprising the first and second floor of Off Vendome’s more conventional space, only one artist is represented by Freedman Fitzpatrick. Shimabuku, an Okinawan video artist, exhibits his 2016 video, The Snow Monkeys of Texas: Do snow monkeys remember snow mountains? which is also currently on view at the Venice Biennale. 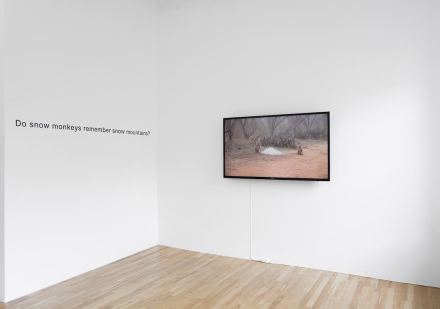 Shimabuku at Off Vendome, hosted by Freedman Fitzpatrick (Installation View), via Off Vendome

Yet when visiting the second floor, where Shimabuku’s video plays on a black flat screen, it becomes evident that Freedman Fitzpatrick have lived up to their reputation for using creative spaces. By installing Shimabuku’s video in a preexisting alcove, the work is visually separated from Off Vendome’s group show, giving the artist’s corner the feeling of a solo show – complete with its own press release perched on a nearby window.

Shimabuku’s piece, in some ways, is a document of macaques being reintroduced to snow. In the 1970’s, a group of Japanese Macaques who had ventured uninvited into Kyoto were scheduled for execution. At the behest of sympathetic American Students, the renegade snow monkeys were sent off to a sanctuary in Texas. Some forty years later, the macaques of snowless Dilley, Texas have increased to a population of 580, and have learned to eat cactus. 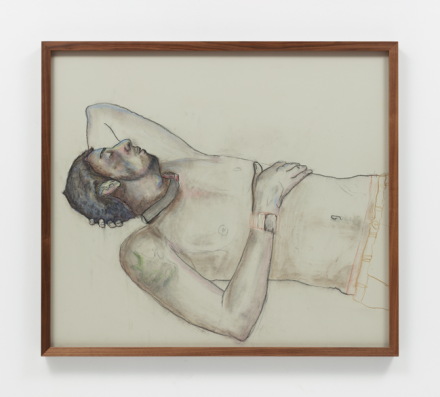 Shimabuku’s video opens on a large mass of ice chunks piled up high on a dirt road. It looks as if someone has stopped halfway home from a tailgate to empty their cooler from the back of their pickup truck. On-screen, a monkey casually emerges from the foliage of cactuses that line the dirt road. Curiously, and somewhat inhibited, the macaque picks at the snowy bits of ice. Several more monkeys make their entrance, emboldened by the first. The snow monkeys naturally fall into playing with the ice. They bite it, throw bits around, and lay in the man made snow pile. These macaques, mostly second/third generation, have never seen snow. Watching them fraternize in the small patch of icy white, the title of the video comes to mind: Do snow monkeys remember snow mountains? 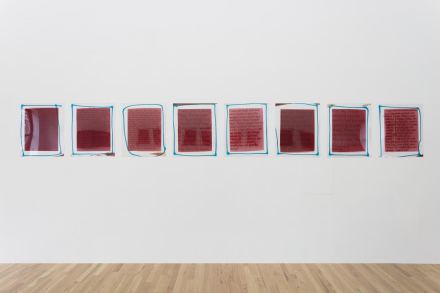 Works by Hadi Fallahpisheh (Installation View), via Off Vendome

Independent of Freedman Fitzpatrick’s offering, Off Vendome is exhibiting pieces by Kyle Thurman, Dani Leder, and Hadi Fallahpisheh.  Thurman, who most recently collaborated with Zak Kitnick for an exhibition at Parapet / Real Humans, exhibits drawings from his Suggested Occupation series. As part of his daily studio practice, Thurman isolates a figurative image from current events and uses it to make a “human size” drawing. Stylistically, these drawings fall close to Maria Lassnig, or even unfinished Alice Neel works. The flesh is rendered, while the clothing is left linear. Conceptually, there is some resemblance as well to On Kawara’s Today paintings. The drawings are done daily, and are tied to the news cycle of that particular date. It is another way of tracking the passage of time, while at the same time leaving the viewer with no real discernible information other than the human form.

Also working in charcoal and colored pencil, Dani Leder’s drawings take up the whole first floor. Drawn with a loose, almost naïve hand, Leder’s Gravity Drawings depict limbs in flux. Hands grip at objects, possibly trying to lift, move or drop them. Curiously, in one drawing a hand wraps around an arm hanging from above, as if instead of grazing fingers with God, Adam had tried to yank him from the heavens. 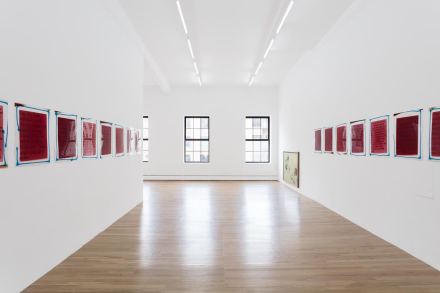 Off Vendome Group Show (Installation View), via Off Vendome

Rounding off the exhibition is a line of photo works by Hadi Fallahpisheh. Fallahpisheh continues usage of his “Hadji” character, which was previously explored in his 2016 exhibition at Kai Matsumiya. “Hadji”, originally a title given to Muslims en route to Mecca, has devolved into a derogatory term.  Fallahpisheh’s works hang on two parallel running walls. Running along each wall is a series of crass jokes involving Trump and Hadji. On the opposing wall, the same jokes appear, but with the roles of Trump and Hadji being reversed. Just by turning around, Trump or Hadji become the butt of the joke. It is a simple way of underlying how the perception of information is affected by the narrative source. Data does not necessarily lie, but it is harder to trust it coming from the mouth of a liar. In that way, it is easier to enjoy and accept content that is fed in an agreeable manner. To some, the jokes with Hadji as the fool would be considered insensitive and in bad taste, while those with Trump in the same role would be a good laugh.  Then to others, the inverse would be true. Ultimately, it is the same joke.

The shows, which close today, mark the conclusion of Off Vendome’s exhibition calendar, in New York, a fitting note on the increasingly challenging landscape for smaller exhibition spaces, and the increasingly relevant role of innovative projects like CONDO.

This entry was posted on Wednesday, July 26th, 2017 at 6:02 pm and is filed under Art News. You can follow any responses to this entry through the RSS 2.0 feed. You can leave a response, or trackback from your own site.