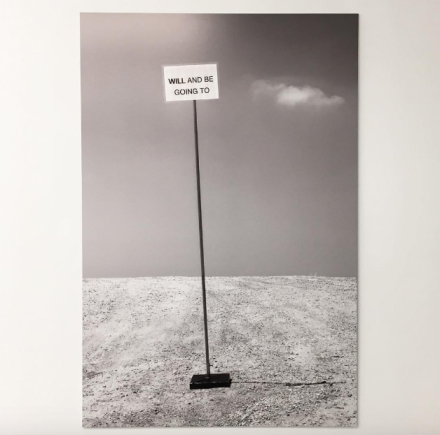 Shannon Ebner, Will And Be Going To (2017), via Art Observed

Los Angeles-based artist Shannon Ebner has marked her first solo exhibition with Eva Presenhuber this month, taking over the gallery’s exhibition space at 39 Great Jones in New York with a series of photographs on aluminum that mark the artist’s continued engagement with temporality and space.  Spread across the gallery’s two floor layout, Ebner’s photographs confront the viewer with a series of reinterpreted engagements with the act of photographic production, pushing for meditations into the creative act and exhibition of her images. 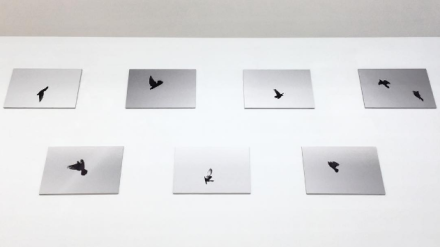 On first impression, Ebner’s work presents itself as a subdued engagement with text and space.  Posters bearing cryptic re-workings of prefixes, bold-faced sentences and poetic fragments invite the viewer to engage in their textual elements, but equally push for an engagement with the image itself.  Her flat-paneled images burst with subtle inflections of texture, emphasizing their initial placement on brick walls and other exterior spaces before being photographed.  Cracks, wrinkles and the occasional tear in the surface of these texts imply a deeper engagement with environment and placement, one echoed in a smaller-scale piece, TEMPLE HI AND LO, which sits on an adjacent wall.  The makeshift cross, with Los Angeles laid out behind it, hints at Ebner’s own role in the making of these images, posing momentary interruptions and performative installations that serve as her documentary subject matter.  Another pair of images, WILL AND BE GOING TO, both bearing the same shot of a cryptic sign tracing the movement of clouds behind it, shows Ebner’s peices working as a marker of both place and time, allowing the movement around the object, and its landscape to emphasize shifts and twists in the legibility of the image. 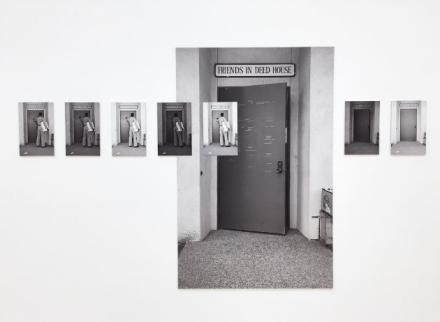 Despite its initial hints at a sparse minimalism, Ebner’s work in the show swells with a delicate, fluid sense of time and movement.  Her images are suspended in a space that breathes and shifts, tracing its various elements in their passage through time.  Much like Ebner’s minimalist antecedents, the act of recording time, of examining the impact of time on the object, is central, but here, the artist once again locks this process into a frozen moment, capturing single details and momentary acts that manage to capture a subtle passage of time even as the time itself has slowed to a dead stop in the image itself, much like in her work GRACE WALKING AND TALKING, which captures her subject in mid-utterance, the time-ordered, but subjective act of speech frozen in execution. 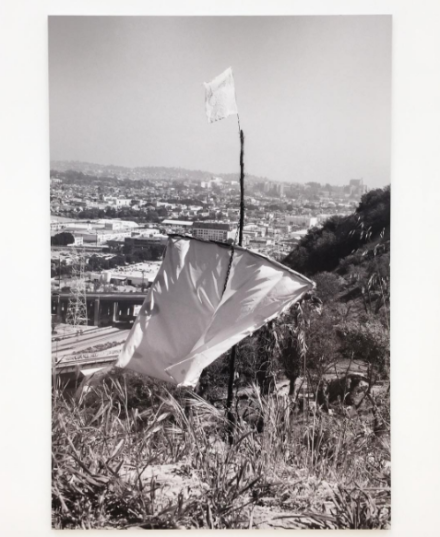 Ebner works this process in reverse in the show’s titular work, which features a turntable playing recorded fragments of poems by Susan Howe and Nathaniel Mackey.  In a space where so much of the action exhibited has been captured in a moment by her camera lens, Ebner welcomes the transposed speech act back into the gallery here, allowing the multiple acts of visual and verbal abstraction to work in tandem.

The artist’s work is on view at Eva Presenhuber through July 29th. 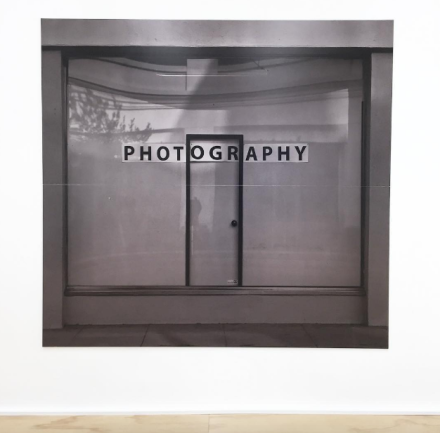 This entry was posted on Wednesday, July 26th, 2017 at 6:44 pm and is filed under Art News, Featured Post, Show. You can follow any responses to this entry through the RSS 2.0 feed. You can leave a response, or trackback from your own site.