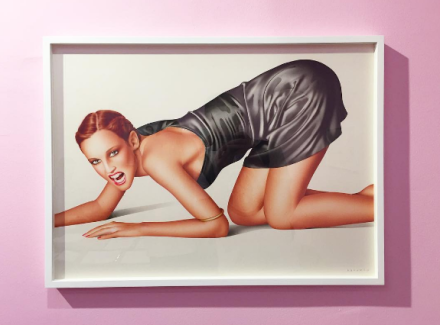 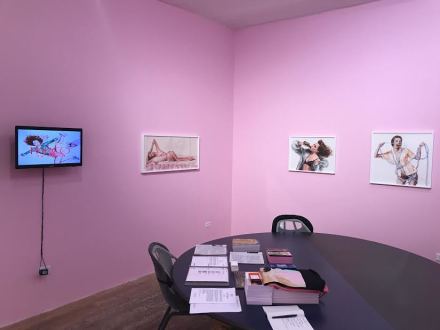 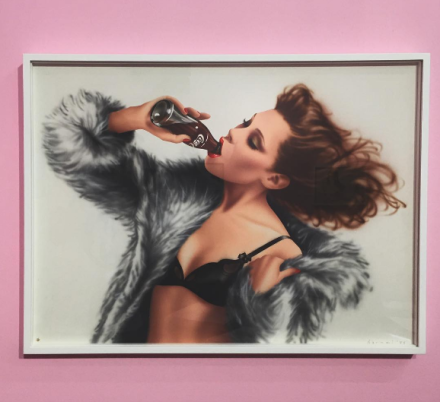 In each of these works, presented on mounted illustration boards, Western women are depicted in some state of repose or subtle movement. Devoid of the copy that would later adorn them, these bodies are accompanied only by their shadows. a lone video work in the exhibition compiles PARCO advertisements using Yamaguchi’s illustrations and concepts. Yamaguchi worked for the Japanese retail giant for years, with her unique designs ultimately serving to cement its ads as an iconic part of Japanese design history. Yamaguchi gives a glimpse of these trendy women in abstracted poses and contexts: a debonair women in boxing gloves jumps over a metropolitan skyline, a pantsuit-professional trotting in heels morphs into an off-brand Wonder Woman, and in another, a woman lounges in cowgirl apparel, a man held in thrall by her beauty.  In each, the artist present the woman as an icon of power, primarily obtained through the act of consumption.  Yamaguchi’s feminism is one bounded by capitalism, a note that makes her poses and imagery all the more striking, and even occasionally enigmatic.

With many artists now using airbrushes as their primary medium (e.g. Avery Singer, Josh Reames, and Michael Williams) Yamaguchi’s early mastery of the medium lays a strong case for her cultural significance, both within her own field, and more broadly that of contemporary image making. In some instances Yamaguchi’s work even feels like direct source material for current works. Yamaguchi’s painting of a short haired brunette spraying herself with an unwieldy plastic hose, for example, calls to mind a 2016 Henry Gunderson painting entitled Catch Up. And just as her figures were pasted into advertisements, one could easily imagine an element of Yamaguchi’s women being re-used or adapted in one of Jamian Juliano-Villani’s hyper-referential compositions. 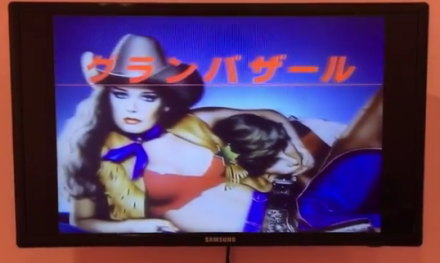 Ultimately, these images were created to appeal to a wide market.  More concretely, their function was to sell. Decades on, advertisers have latched onto new aesthetics to move their product, but these illustrations still carry a compelling charge, a sense of captured desire and energy that makes Yamaguchi’s work feel enduringly relevant, even past their function in commercial branding. Recast on the pink walls in the back office of a Bridget Donahue, the artist’s illustrations now work to validate her historical importance as an early visual purveyor of “Gyaru” style, and as a titan of airbrushing technique in a broader exchange with the history of the modern image. Seeing these images’ ability to persuade, it is no great mystery as to why new artists are using the same vernacular found in Yamaguchi’s old illustrations in their own artwork, or to why her work feels so fresh once again in 2017. 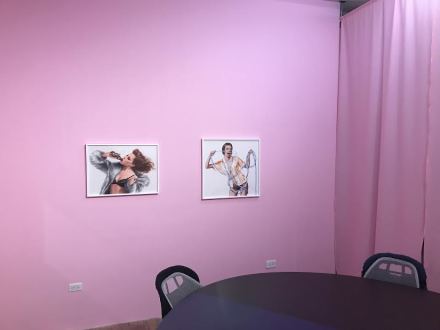 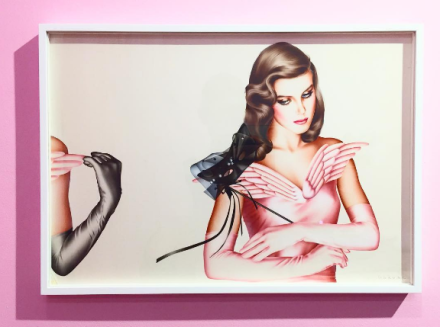 This entry was posted on Sunday, July 23rd, 2017 at 12:30 pm and is filed under Art News, Featured Post, Show. You can follow any responses to this entry through the RSS 2.0 feed. You can leave a response, or trackback from your own site.