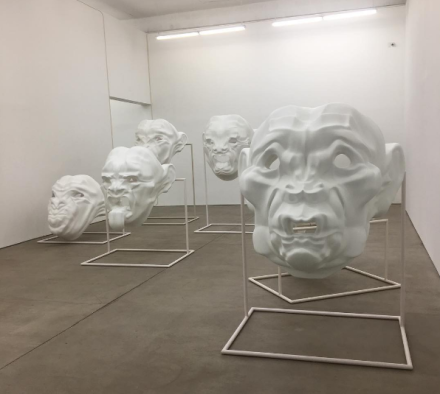 French artist Marguerite Humeau is showing new works at Clearing Gallery this summer, marking a continued engagement with processes of deep historical research and engagement with varied mythological traditions in her work, the new exhibition draws particular interest from the myth of the Sphinx, investigating the creature as a fitting metaphorical subject and thematic for the landscape of modernity.  Here, Humeau takes on the state of modern surveillance, translating the Sphinx into a fitting metaphor for the modern technological landscape, and a convenient point of connection between the massive communicative power of modern tech and the mythic power of Greek civilization. 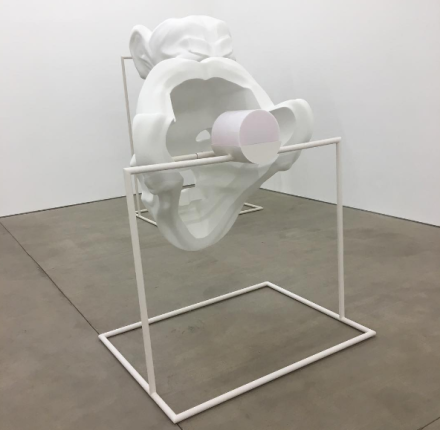 The show starts from an intriguing perspective, translating the Sphinx’s all-seeing eyes as gatekeeper of Thebes into a modern meditation on security and power.  The viewer is greeted by a facial recognition array when entering the site, offering the viewer a momentary pause to reflect on the state of the body in modern space, and its constant negotiation with its state as data in an array.  Humeau’s work, even as the viewer peers at it, turns the viewer into a site for the exercise of power. 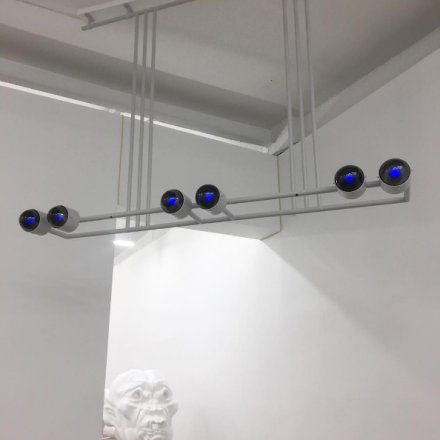 Humeau’s sculptures are perhaps the most commanding and ultimately challenging part of the exhibition, a dense cluster of immense visages peering out at the viewer.  Churning with a series of electronics mounted behind each head, the works seem to invite the viewer into a close physical engagement, even opening space for the viewer to tuck their head up into the face as if it were a large-scale mask of some sort.  However, this close interaction equally brings subtle shifts in the sonic experience of the work, allowing a perception of subtle ticking noises and gentle droning elements that lull the viewer into a dazed, nearly illusory state.  From the inside of the mask, the eyes are often the only visible element, dominating the field of vision in a manner that becomes increasingly hypnotic and unnerving as the viewer peers into the stark white expanse. 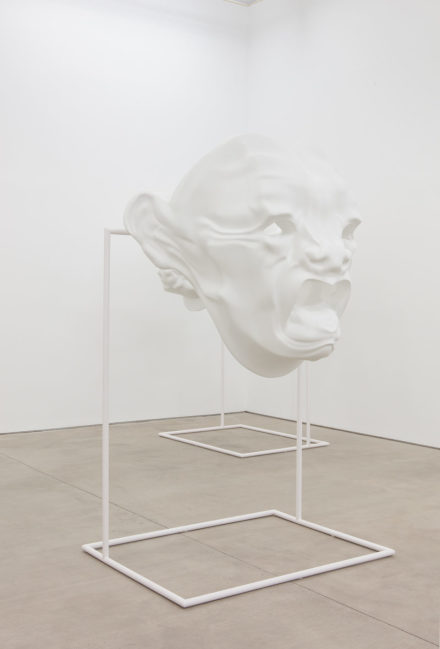 Watching and looking are central to Humeau’s work here, yet the act of experience is ultimately turned into a deep metaphysical engagement with space itself.  Her works turn the attempt to experience and interact into a visual void of sorts, an empty white space where the viewer’s attempt to become the mask-wearer ultimately turns them back into an observer, or perhaps, simultaneously, the observed.  Humeau’s engagement with the Sphinx as an inveterate riddle-maker is translated here into sites where the act of watching forces a negotiation with being watched, a space where the viewer, no matter how hard they might try, must remain subject to the enclosed spaces and hypnotic lull of the mask.  While one may seek to understand the quizzical nature of these forms, Humeau’s works offer no easy answers. 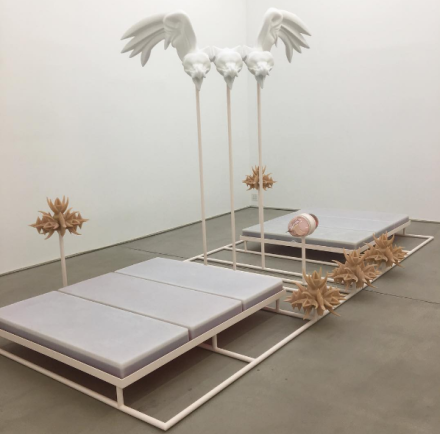 In the final room of the exhibition, Humeau’s work is translated into an enigmatic sculptural object, HARRY II (BODY), which poses a modern Sphinx over tanks of artificial blood and human skin.  The work is realized in a stark, clinical style, emphasizing a sense of modern abstraction from the body, and a certain gestural flourish that reduces its manufactured human signifiers to seemingly decorative accents.  Humeau’s Sphinx becomes a screeching force, devoid of human elements, yet holding court over the elements below.

It’s a bleak picture of modern life on view to be sure, but equally one that emphasizes the viewer’s role in engaging with, and supporting, these same systems of control and surveillance.  While Humeau’s coy translation of Greek mythology to the modern era, both aesthetically and formally, lends the same sense of otherworldly dread to her subject, it’s equally a fitting manner to understand the agency of the modern subject. Perhaps it’s a bit of wishful thinking, but the viewer’s ability to step out of these masks and go about their day, seems to offer a chance of redemption.

The show is on view through July 23rd.

This entry was posted on Saturday, July 8th, 2017 at 2:01 am and is filed under Art News, Featured Post, Show. You can follow any responses to this entry through the RSS 2.0 feed. You can leave a response, or trackback from your own site.