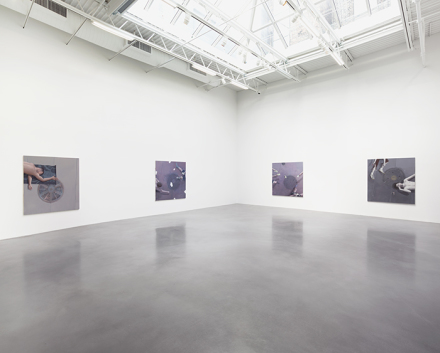 For the artist’s sixth solo exhibition at the gallery, New York’s Petzel Gallery is presenting nine new paintings by Thomas Eggerer, introducing an innovative figuration to the artist’s already established practice in meticulous depictions of the everyday. Each of the three large-scale works, as well as the six smaller canvases feature an elevated street view in which an industrial manhole cover is the focal point. In the larger works, the cool metal lids stand alone, while in the remaining, and arguably more engrossing paintings, they are accompanied by objects and figures that enact situations on and around them. 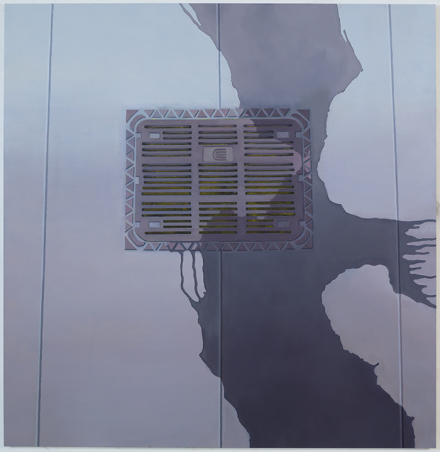 The most striking shift in this body of work is the absence of Eggerer’s characteristic passages of gestural abstraction. Gone are the sumptuous stains and clouds of color that often act as moments of transition in his canvases, encircling and trailing behind figures like hazy auras. The only vestige of this device is the inkblot form that traverses Spill (2017).  Yet even then, it is sharply rendered, in contrast to the smokey patch of brown that shrouded the similar composition Floorpiece (2013) at the artist’s fourth solo exhibition with Petzel. David Joselit has rightly identified the fragmentation of bodies that occurs in Eggerer’s works, namely their “partition…into distinct temporal zones.” But this operation has, until this point, existed as a multifaceted process of mark-making on the part of the artist, who concealed, blurred, duplicated, scratched, and covered his protagonists in sludge. In “Todd,” the fog has lifted, and the dislocation of bodies is achieved solely by the fractional way in which they enter, exit, and occupy the canvas. Although such segmented anatomies were already present in Eggerer’s 2015 exhibition at Maureen Paley in London, the moments of abstraction and defacement of figures persisted. Now, far from inviting us into dreamlike environments where disembodied bodies appear to float in and out of consciousness, the artist renders his figures discernibly, a decision that accentuates their severed nature. The viewer is disquietingly aware that a work like Menthol (2017), for instance, features only extremities. 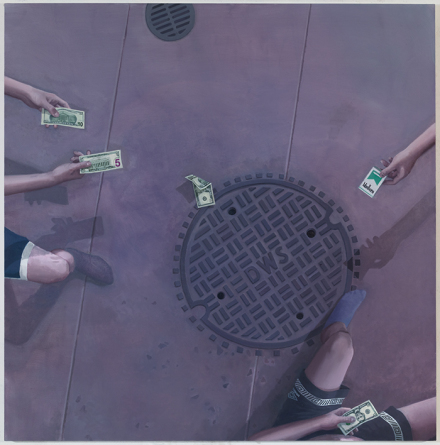 Eggerer was a member of Group Material, an artistic collective that examined intersections of art and politics, dedicating special attention to questions of institutional exhibition-making. Though his involvement with the group was brief (the collective ceased activities in 1996, a year after Eggerer joined), his work is intimately concerned with public space. The anonymity of the streets in “Todd” is problematized by our bird’s-eye view of the scenes, a perspective that evokes surveillance, and by the lingering presence of authority indexed by the conEdison insignia or the Department of Water Supply acronym stamped on a manhole cover. The surface of an urban street—the epitome of a public place—becomes a polemical arena in which civilians and bureaucrats are head to head. 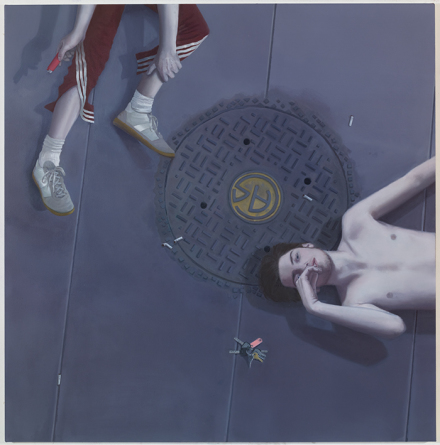 The characters in these compositions, however, do not strike the viewer as the naive and unsuspecting victims of government control and supervision. They seem far too deliberate in their gestures, almost anarchistic as they smoke, drink, litter, and loiter, shirtless and brazen. In one of the more humorous works in the exhibition, Street Yoga (2017), a man performs a shoulder stretch on a printed yoga mat that partially conceals the top of a manhole cover, the energy company’s logo fully visible. If the paintings in “Todd” are less performative in the traditional sense, given the lack of Eggerer’s gestural mark, the artist has instead staged clearly-rendered bodies performing powerful narratives. In his choice to focus on figuration and in the emboldened nonchalance of his figures, Eggerer has produced a group of paintings that dare to deviate in the most timely way. 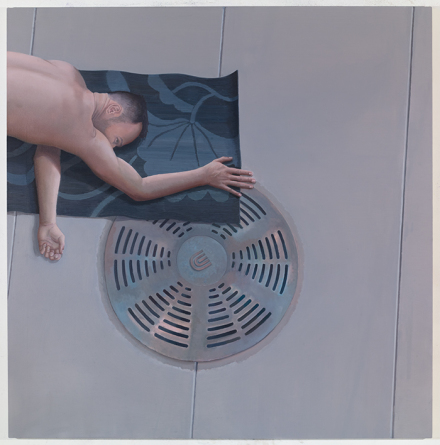 This entry was posted on Saturday, October 14th, 2017 at 7:16 pm and is filed under Art News, Featured Post, Show. You can follow any responses to this entry through the RSS 2.0 feed. You can leave a response, or trackback from your own site.