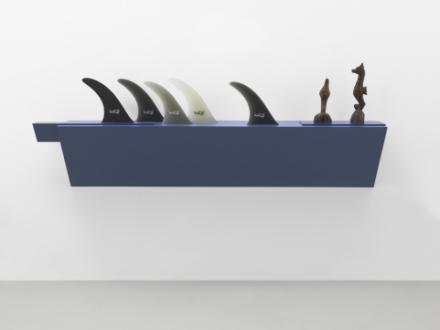 Now through January 20th, 2018, White Cube is presenting jaws, a series of new works by Haim Steinbach at Mason’s Yard, featuring a new series of shelf works and the major installation Design #15–Design for a Yogurt Bar, first conceived in 1981 and reconfigured for the gallery space. Centered around ideas of leisure and health, Steinbach’s works in the show draw on cultural models from the 1970s and 1980s to reveal novel and unexpected meanings through juxtaposition. 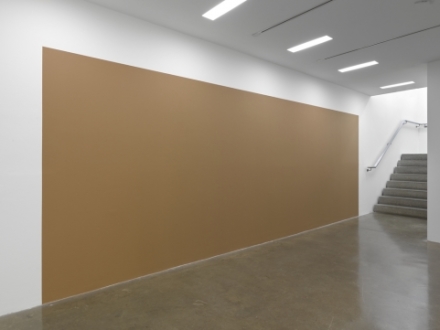 Display #15—Design for a Yogurt Bar is a room-sized art work featuring a spray painted wall and a handcrafted shelf that holds a wooden doll’s chair, a potted flower, an a Moroccan coffee pot. The installation creates an enclosed environment of ambiguous domesticity and intimacy. The title of the work references the rise of the frozen yogurt bar in the 1980s, and suggests the cultural transformation and commodification of yogurt, once primarily consumed in the near East, and now ubiquitous and available in supermarket aisles across the world. This investigation into articulating the historical and cultural stakes of health and leisure is continued in Steinbach’s new series of shelf works, where upright surfboard fins of different shapes and colors are presented alongside various other objects. 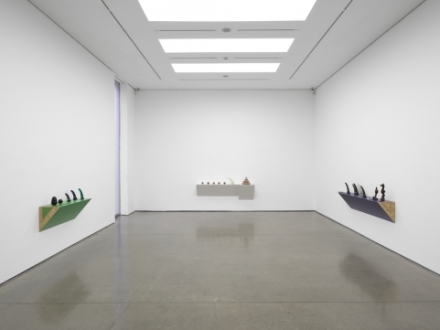 As the press release for this exhibition states, the trope of the surfboard appears to be “syncopating a cultural archetype of surf and beach culture with a reflection of our primal fears (two thematic strands famously evoked in Spielberg’s film Jaws, 1975).” On the structure of the shelf, the fins and objects placed in a line enable a progressive, directional reading of the work, moving the visitor’s eye in a direct line across its surface. In Untitled (kongs, bear, cage, darners, fin), a blue fin appears “like a full stop after a series of objects placed in a line,” reflecting the construction of meaning that takes place in the repetition and rhythm incorporated into Steinbach’s work. 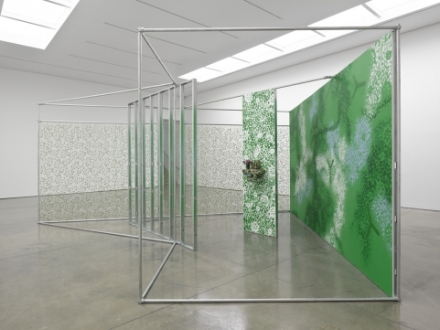 Much in the same way that Steinbach so often draws on accumulation as a mode of assembling narratives, the artist often re-contextualizes his own earlier works, adapting them to new spatial and social parameters. The effect of this practice is to bring out particular history, identity, or story that each object carries, and examine the shift of meanings or associations that takes place when rearranging or resurrecting them. The shelf has been an elemental structure in Steinbach’s work since the late 1970s, seen as a “paradigm, a device for visualizing the organization and distribution of objects.” What’s more, the shelf pieces invite the viewer to question their perceived understanding of the fragile boundaries between the role of art and the kind of temporal decoration that individuals erect in the space of the home. Steinbach’s jaws brings work from decades ago into contact with new pieces to articulate the shifting forces that inform the possibilities of seeing and understanding cultural conditioning. 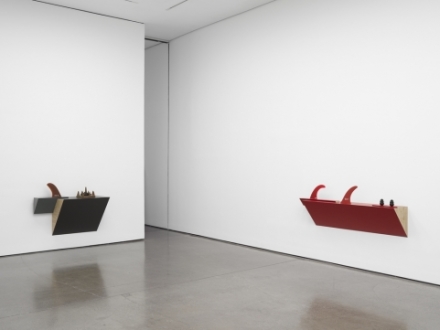 This entry was posted on Thursday, December 14th, 2017 at 10:26 am and is filed under Art News, Featured Post, Show. You can follow any responses to this entry through the RSS 2.0 feed. You can leave a response, or trackback from your own site.