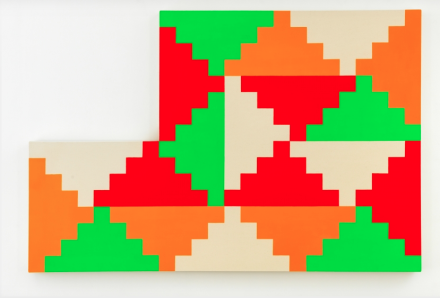 Formed in Toronto in 1969 by AA Bronson, Felix Partz and Jorge Zontal, the artist collective General Idea built its body of work on a strikingly diverse array of themes, constantly revisiting both the field of contemporary art production and the identity politics of the era that ultimately underscores so much of the artist’s act of world-making, critique and expression.  No subject was safe from their intuitive and enigmatic lens, from the myth of the artist, the role of mass media, and the relationship between the body and identity, to questions of gender and sexual representation, and perhaps most famously, the HIV/AIDS activism of the 1980’s, a mode of critique that the group were pioneers of during an era of intense repression and governmental silence.  Working in a broad range of practices, from paintings to performances, published editions to video, sculpture to installation, the group was almost constantly in a state of reinvention, speaking to the diversity and power of their collective vision. 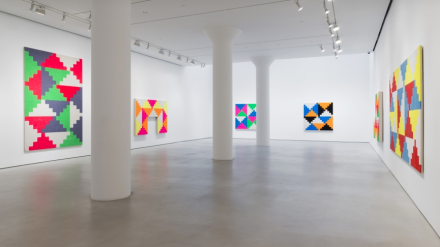 This vision sits at the core of a retrospective currently on view at Mitchell-Innes & Nash in New York, offering itself as an introduction of sorts for the group as its estate moves its representation duties to the gallery.  Centering on their body of Ziggurat paintings, the show serves as an introduction to one of the central thematics of the group, one that explores interlocking geometric shapes, and a pop art sensibility towards reproduction and presentation that sits at the core of so much of their work.

“We were brought up in the post-war period, and we were interested in the idea of progress and images of progress,” Bronson says of the form.  “We didn’t believe in progress as a concept.  We were interested in how it dominated the post-war imagination.  If you look at business magazines from the ‘50s, for example Fortune Magazine, the advertising features a lot of skyscrapers, which are always stepped.  This image of the ziggurat always dominates.  It is an image of power or even male power. The ziggurat came to represent the future, the strength of progress and technological change and the male power of construction.” 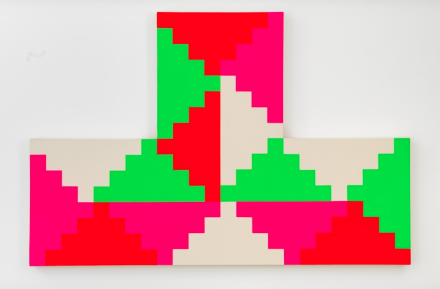 Presented here across a range of canvases, this sense of male power and dominance is turned into an almost cartoonish glyph of sexual and cultural power.  Repeated in a range of colors, the form seems to spiral out of control, spinning about itself and subverting easy readings of ground versus subject.  The use of shaped canvases in addition to this formal approach complicates the work further, giving the viewer a moment’s pause in understanding the visual depths expressed here, and the actual materiality of the canvas in conjunction with the repeated image itself. 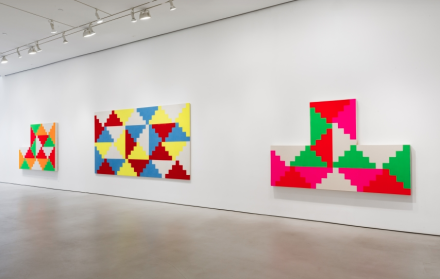 Through this simple image, the group creates a dizzying field of colors, turning a reading of male power through this fundamental form into something distinctly more playful, and perhaps more critically-engaged as well.  Turning this form into a colorful and swirling mass, one is prompted to examine its form, and the language systems the image is drawn from.  Space is placed in service of the ziggurat, a form that ultimately becomes the basis of measurement for the canvas, and the sole graphic by which the work can be understood, traced, or consumed at all.

The exhibition is on view through January 13th. 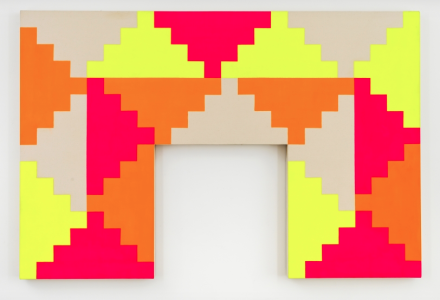 This entry was posted on Sunday, December 31st, 2017 at 3:55 pm and is filed under Art News, Featured Post, Show. You can follow any responses to this entry through the RSS 2.0 feed. You can leave a response, or trackback from your own site.