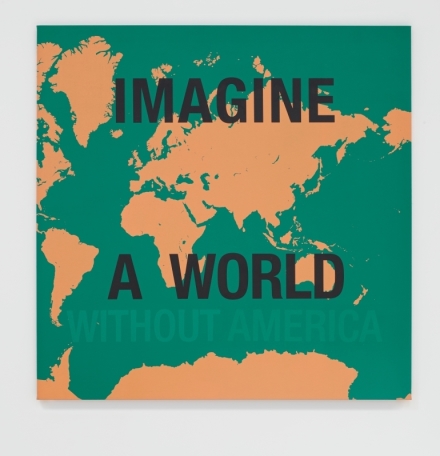 Dread Scott, Imagine a World Without America (2007), via James Cohan

Taking over the gallery’s two exhibition spaces in New York, James Cohan Gallery is currently presenting a group exhibition to kick off a year charged by harsh political rhetoric and an ongoing government shutdown over the future of the United States’s Southern Border.  The show, fittingly titled ‘Borders,’ offers a meditation on the political, ideological and formal concepts of border lines, walls, national identities and its attendant concepts of state power, sovereignty and national identity. 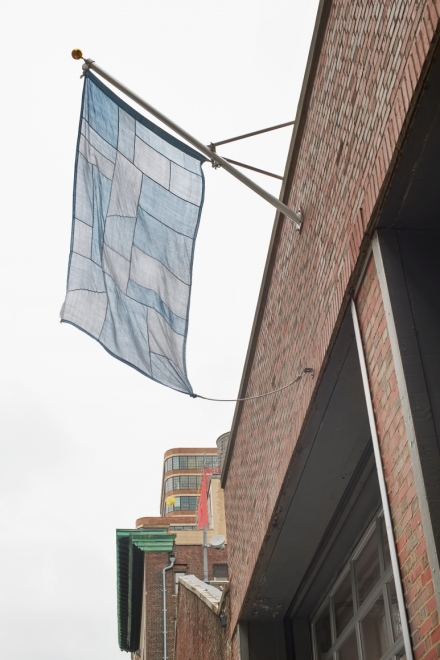 In the world of art, the liminal site is an essential aspect of construction and coherence of the modern art object.  Borders visually define space; utilizing form, color, and line to separate, delineate and frame fields of visual perception. In painting, formal borders call attention to the work’s nature both as an image and an object, and provide compositional structure. In sculpture and installation-based work, borders act to define and destabilize the relationship of the object in space, and negotiate the engagement between the viewer and the work of art.  Yet their political underpinnings are equally relevant in the modern sphere of socio-political discourse as well, and accordingly offer fertile ground for contemporary comment.  They define both belonging and otherness. In the face of rising nationalism and the growing global refugee crisis, borders across the world are tightening and also unraveling. This exhibition will seek to create a framework and a dialogue about borders as both places of productive exchange and barriers of exclusion.

At the gallery’s 26th Street location, one will encounter a body of physical works, each challenging the notions of physical space, identity, and the demarcations of space that ultimately both inform and critique these same concepts.  Outside the space, artist Byron Kim’s ‘Sky Blue Flag,’ which formerly flew ca a few meters from the Korean Demilitarized Zone checkpoint, questions physical and political borders at a site where division is most evident. Using the language of abstract painting, Kim confuses subject and ground, conflating the relationship between a flat image and real space. Inside, one can consider works like Dread Scott’s ‘Imagine a World Without America,; calling the viewer to participate in the titular thought experiment and contemplate that absence. The painting de-centers the United States of America from the middle of the map that most Americans are familiar with, utilizing the language of cartography to encourage the exploration of social questions.  There are no true physical borders, he seems to say. 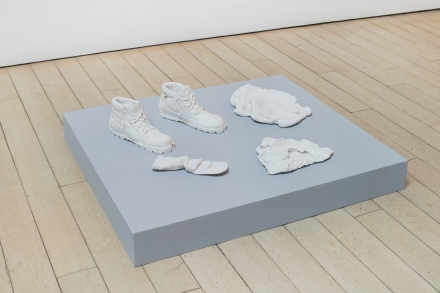 The viewer is also confronted by art Jorge Méndez Blake’s imposing brick wall whose structure is disrupted by the insertion of a book at its base.  The work, dividing the gallery in half and accenting a copy of Kafka’s unfinished novel ‘The Man who Disappeared’ (published posthumously as ‘Amerika’), reflects the plot of a young man who navigates the travails of life in New York as an immigrant from Europe, the weight of the wall upon the book operating as a physical metaphor of the book’s motifs. At the gallery’s Grand Street location, one can view a rotating series of screenings of video works by XU ZHEN®️, Hiraki Sawa and Edgardo Aragòn that explore geographic boundary lines and blur lines between fiction and reality. XU ZHEN®️’s 18 Days is a 2006 faux documentary in which the artist “invades” Myanmar, Mongolia and Russia using remote-control operated toy weapons, while Hiraki Sawa’s black and white video Dwelling, 2002, depicts digitally-inserted, miniature passenger airplanes that fly slowly around the artist’s nondescript apartment and probes the permeable borders between childlike fantasy and the mundane. 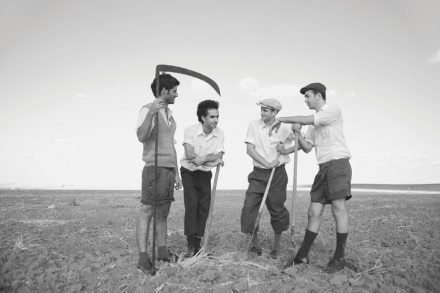 Yael Bartana, 21. The Missing Negatives of the Sonnenfeld Collection (2008), via James Cohan

In each work, the concept of the line, of the limit, is always a resonant element, interrogating the artist’s role in both constructing arbitrary limits within their work, or using it to reformat and reframe the idea of the space outside.  In each of these pieces, their works manage to twist that question into the framework of resonant political moment.

This entry was posted on Saturday, January 19th, 2019 at 7:58 pm and is filed under Art News, Featured Post, Show. You can follow any responses to this entry through the RSS 2.0 feed. You can leave a response, or trackback from your own site.