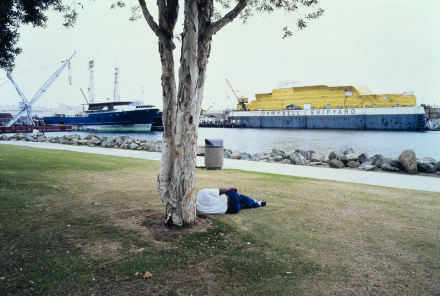 Having first shown the late Allan Sekula’s nuanced and incisive photographic and conceptual work at its London Gallery this spring, Marian Goodman has once again tapped the artist’s archive for a wide-ranging exhibition of his works at its New York space this summer, compiling works from a range of different projects the artist has embraced over the years, and moving between film, performance and photography.

Growing up in San Pedro, the immense port of Los Angeles, Sekula had an early connection to the sea, to its vast expanses and its economic moorings in equal measure. To the artist, the sea was as much a site of exploration as it was of arduous labor, and as he developed his work, he would continue to move in and out of an engagement with the sea’s implications in networks of global trade, increasingly interconnected economic networks, and above all, the work that drive these systems forward. Technology and design, ever accelerating under the necessities of modern trade, are presented in the artist’s work as a parallel with that of the human body and the toll modern capital takes on its human “material.” 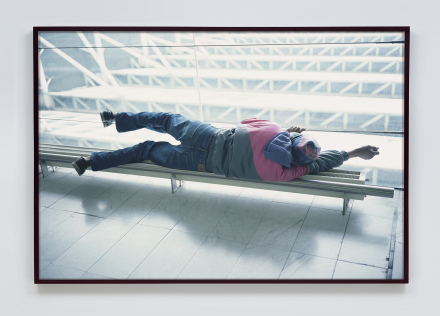 A professed Marxist, Sekula’s work consistently invokes the labor theory of value, and presses the habitual glossing of the diverse forms of work that make our material world possible. Serving as an animated principle in these struggles, photography in the artist’s work serves as the technological means that echoes these concerns, to some degree obliterating the hand of the artist and their agency while simultaneously providing an increasingly meticulous reproduction of the world.

This survey of Sekula’s works on the theme of labor includes a key selection of major pieces spanning his career. In the first and largest gallery, the gallery has exhibited the print version of Sekula’s Untitled Slide Sequence from 1972, a linear sequence of twenty-five photographs of aerospace workers leaving the day shift of General Dynamics Convair Division in San Diego. Referencing the Lumiere brothers’ early cinematic fragment, the piece transforms early presentations of labor into a new stage, where the concealment of labor has become part of the modern economic hegemony.

By contrast, This Ain’t China (1974), a mixed-media performance-based work combines mock portraits of food on offer, a management diagram of efficient restaurant organization, and a group of photographs of a motley team of restaurant workers (including the young artist) contemplating going out on strike. The piece parodies the scale and pretense of worker relations under modern American capitalism, the struggles and the concerns of the workers dismissed or threatened quickly under the current state of worker protections. Another performative work, Dear Bill Gates (1999) joins these other two works in the main gallery with a rather elaborate piece of staging in which Sekula photograph’s himself in the waters just outside Gates’s lakeside mansion in Seattle, then directly addresses a letter to the him, chastising his taste and willingness to overpay for a certain work of American maritime art. 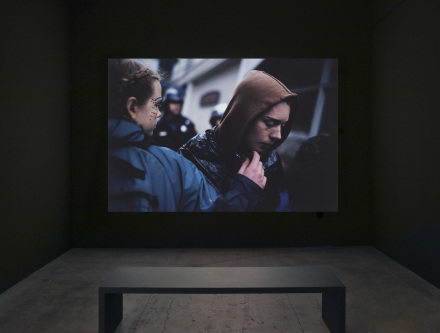 The full scope of the show reflects the artist’s ongoing interest in the working body, putting it through its paces and exploring its connections to broader systems as a way to understand just how we are posed in modern capitalism, and just how work constitutes the body, and, by contrast, to what degree the most powerful in our society profits from that same work, and its respective depictions.

This entry was posted on Tuesday, August 13th, 2019 at 2:50 pm and is filed under Art News, Featured Post, Show. You can follow any responses to this entry through the RSS 2.0 feed. You can leave a response, or trackback from your own site.