In some ways a celebration of the life and work of Janette Laverrière, Marian Goodman is currently hosting an exhibition of works at its New York gallery space that combines the designer’s ideas with that of Nairy Baghramian’s, centering the show on a collaborative project that the two worked on before Laverrièr’s death in 2011. Presenting sketches, drawings and maquettes of Baghramian’s works from 1999 to the present that were never intended to be realized, the show is an intriguing portrait of collaboration and friendship.

The heart of the show centers on the pair’s mutual friendship, with Baghramian developing works around Laverrière’s playful, witty designs and intriguing concepts. A pioneering Swiss/French designer who conceived of her own mind as an interior architectural space, Laverrière’s famous renunciation of useful objects resulted in the material transformation of figures, ideas and narratives, often drawing from literature, politics, and history to render forms driven by a sense of role-playing and world-making. Here, the show centers around Baghramian and Laverrière’s first collaboration for the Berlin Bienniale 5, The Lamp in the Grandfather Clock, which created a standing plexiglass wall enclosure that seemed to reference Laverrière’s Paris apartment and personal items, marking them with famous quotes and imbuing them with momentary looks into the designer’s own interior universe. 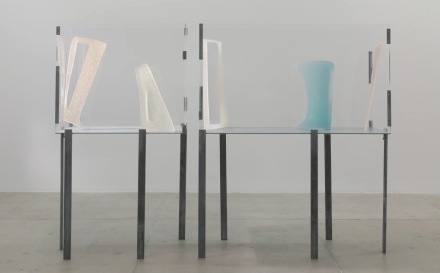 Baghramian also presents, La Colonne Cassée 1871, The Broken Column 1871, (2008). Consisting of vertical L-shaped steel sculptures sandwiching a freestanding glass wall, the work references architectural modernism, and in turn folds back on Laverrière’s mirror-object La commune (hommage à Louise Michel), 2001, a tribute to the 19th century proto-feminist and anarchist. Pulling the French Revolution into the experience of modern space her pieces seem to take a step outside time and function, pulling together a range of symbolisms and political allegiances smuggled into domestic space.

The exhibition also features maquettes, sketches and drawings of Baghramian’s unrealized sculptures which are brought together and shown for the first time, displayed in plexi and zinc- coated metal vitrines, which become like fragments themselves. Presenting models and other small-scale renders, the items are turned away from utility and towards objects of contemplation. They are forbidden from becoming sculpture, but stand as a part of the environment nevertheless, a testament to suspended intent and space.

Compiling this broad range of signifiers and concepts, the show closes December 20th.

This entry was posted on Sunday, December 15th, 2019 at 12:52 pm and is filed under Art News, Featured Post, Show. You can follow any responses to this entry through the RSS 2.0 feed. You can leave a response, or trackback from your own site.