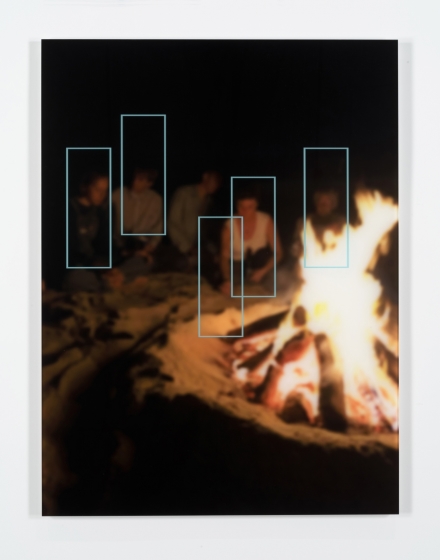 Taking over the exhibition spaces at 303 Gallery’s Chelsea space this winter, Kim Gordon presents a body of new works that mix together a range of cultural vantage points and disparate iconographies through multi-media works, photographs and painted canvases.  Her second solo exhibition with the gallery, the show is a striking look at the artist’s nuanced and expansive oeuvre, one which has earned her increasing recognition in recent years. 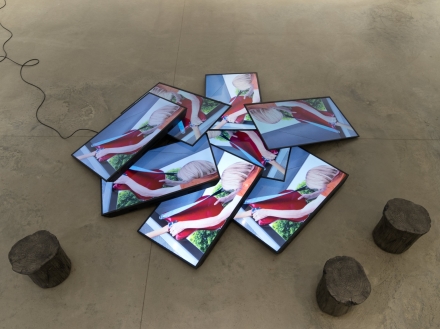 In a series of new works on canvas, Gordon presents a world of safety and familial intimacy, surreptitiously undermined by insidious, unseen forces. Photographs of a group of revelers huddling around a beach bonfire are softened and overlaid with digital framing marks around the human figures suggests a body under watch, the subject of surveillance technology or facial recognition software. Embracing an expanded sense of constant exploitation and observation, her works seem to explore a world where all moments are captured and recorded, where ordinary events are processed and consumed by unseen agents, whether human or otherwise, and turned towards a marketable, understandable message, one often wielded by capitalism. Gordon amplifies this phenomenon, referencing iconography from the world of music as it dovetails with youthful rebellion. The various crops and crosshairs allude to the logos of both Black Flag and Public Enemy, two groups emblematic of questioning authority and rising above structural oppression. Gordon’s emphases seem to echo their animosity, drawing the very same lines as our tyrannical tech overlords, yet with the express purpose of reasserting control of our own dominions. 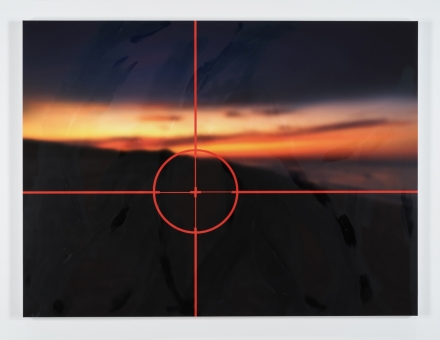 Also on view is Los Angeles June 6, 2019, a film featuring Gordon walking around Los Angeles with a guitar, utilizing handrails, plants, traffic implements, public sculpture and light poles as various accomplices in a performance that quite literally uses the city as a sounding board. Drawing on a similar improvisatory approach to sound as some of her more outré music work with Sonic Youth and Body/Head, Gordon assumes the role of interloper, unfazed by her audience while navigating the corporate territory of public spaces. She is a performer in a manner that is both classic and contemporary, consumed by surveillance technologies and unwitting viewers, and often both at once, the smartphone wielding passerby ready to turn her work into a stream of its own.

The artist’s work is on view through February 22nd. 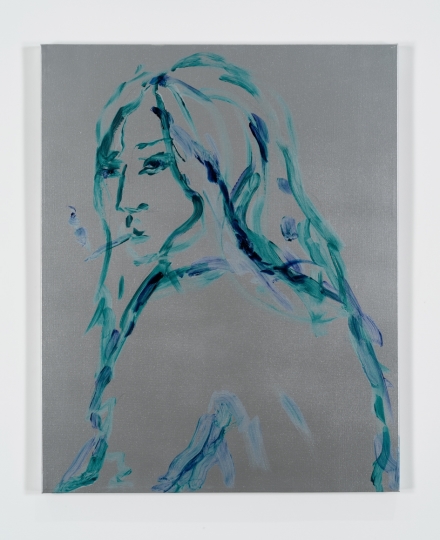 This entry was posted on Thursday, January 23rd, 2020 at 12:46 pm and is filed under Art News, Featured Post, Show. You can follow any responses to this entry through the RSS 2.0 feed. You can leave a response, or trackback from your own site.