Currently on view at Marian Goodman in New York, artist Lothar Baumgarten is the subject of a posthumous show focusing on a body of work he helped compile before his passing.  “The Early Years” focuses on the formative works that shaped his oeuvre, and functions as an homage to one of the most important German artists who influenced a subsequent generation, not to mention an artist who has worked with the gallery since the 1980’s. 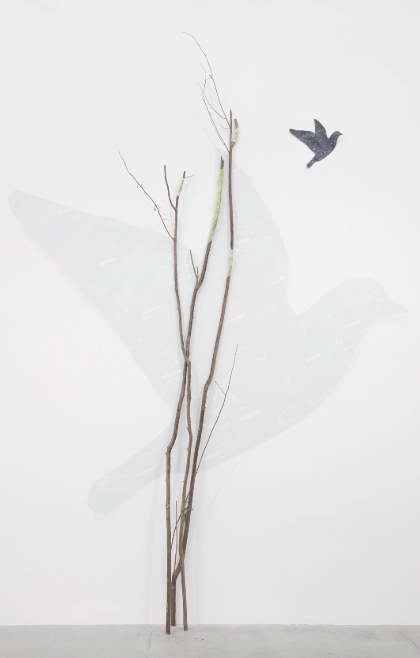 Focusing on the years before his first journeys to South America in 1977 and 1978 to live with the indigenous Yanomami people, the show compiles a range of works made between 1968 and 1977, works that hint at later interests and explore the vocabulary that has since become his hallmark.  Painting over sourced documents and maps, or rendering tightly arranged photographs, the artist’s work exists in a state between dreaming and waking, where the materials of daily life seem to hang just beyond the truly knowable.  When Baumgarten studied under Joseph Beuys at the Düsseldorf art academy in the late 1960s and created his first works as an artist, he found himself in a cultural milieu dominated by a post-fascist pioneering spirit that gave rise to a unique and active art scene in the Rhineland, seeking an escape from Germany’s fascist past, the artist seemed to explore states beyond mourning and contemplation, a sort of spiritual landscape that traps fragility and military power in a continuum that sees both sides informing the other.  Elsewhere, the natural world slowly intrudes in on man-made objects, pigments, and sites.  His early works present both military renderings and “dream” animals, suggesting a sort of escapism through fantasy that might open the door to a better understanding of a world post-war. 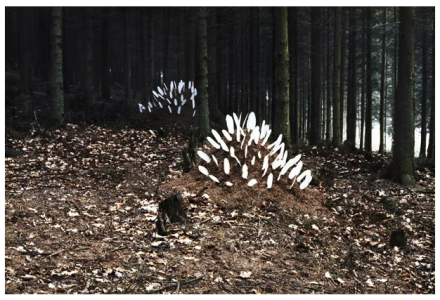 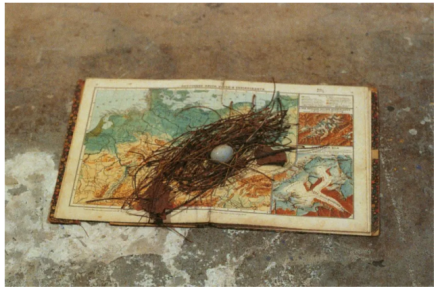 This concept is emphasized in particular in the North Gallery, where a selection of Lothar Baumgarten’s color photographs from the 1968–72 series Culture-Nature (Manipulated Reality) can be viewed, as well as a number of black-and-white photographs mostly of ephemeral sculptural interventions, including some the artist staged and photographed in the Rheinaue wetlands not far from his home.  As a reptile meets a sink, jungle meets kale, and pyramids meet molehills, it becomes clear how fragile meaning and representation are. By contrast, his miniature hothouse sculpture Conservatories (Guyana) (1969–72/2012) the artist combines kale, a variety indigenous to the artist’s home region, with a genus of moth, thereby collapsing the distance between European and non-European cultures by creating a self-sustaining environment while referencing Guyana, a region of undisturbed tropical rainforest bordering the Amazon Basin.  The same interest in fusion through nature takes center stage here, with the artist’s hand existing in the background, orchestrating these uncanny fusions.

Baumgarten’s work here is notable in its sense of the human hand at play, of finding new manners and modes through which we can understand and anticipate human agency, and work to see its myriad impacts on the world around us.

This entry was posted on Wednesday, January 15th, 2020 at 12:21 pm and is filed under Art News, Featured Post, Show. You can follow any responses to this entry through the RSS 2.0 feed. You can leave a response, or trackback from your own site.