New York – Rashid Johnson: “The Hikers” at Hauser and Wirth Through January 25th, 219 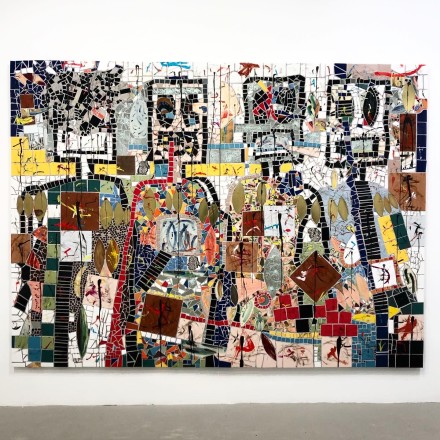 On view this fall in New York, Hauser & Wirth presents The Hikers, an exhibition of recent works by Rashid Johnson that unites ceramic tile mosaics, collaged paintings, and a large-scale sculpture that work together to address Johnson’s recurring interest in currents of anxiety and escapism created by the political and social turmoil felt across the United States and around the globe. 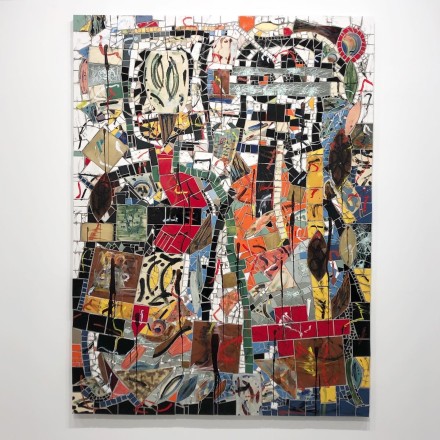 Borrowing its title from his most recent filmic work, the show spreads throughout five rooms in the massive gallery, allowing Johnson to toy with variations and iterations of his mosaics and collages. Clusters of faces and bodies spread across various media are orchestrated in a dance of context and conversation, each time hinting at a sense of alienated figuration, an abstraction made real in our psychologically-fraught modernity. The viewer is first greeted by three monumental mosaics, each comprised of myriad materials familiar from the artist’s practice: multi-color ceramic and mirror tile, oil stick, black soap, wax, and branded red oak flooring. These works evolved out of Johnson’s Anxious Men and Anxious Audiences (2015 – 2018), earlier series in which frenzied, abstracted faces were rendered in black soap and wax on a grid of white tiles. Here, his images of Broken Men and their fellows explore in a storm of bold hues, errant drips of wax, splashes of paint, and splintered surfaces. 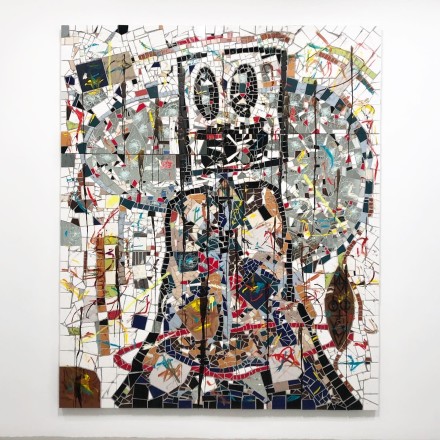 Including a more nuanced, attentive approach to these works, Johnson incorporates his past interest in fragmented collages, creating swirling images that proclaim a near constant sense of motion. His figures are driven to new extremes, their familiar visages managing to hold the viewer in a sense of understanding as to their psychological and physiological progressions from past series. As injustices and racial conflicts in the US have continued to flare, Johnson’s works have likewise become more charged and dystopian than their earlier Anxious counterparts. Also of note is Untitled Bronze Head (2019), a large-scale bronze figure that awaits the viewer traversing The Hikers. Exuding a shamanistic series of implications, Johnson’s piece seems to offer a new interiority to the works surrounding it, embodying this same sense of a wild other in three-dimensions. 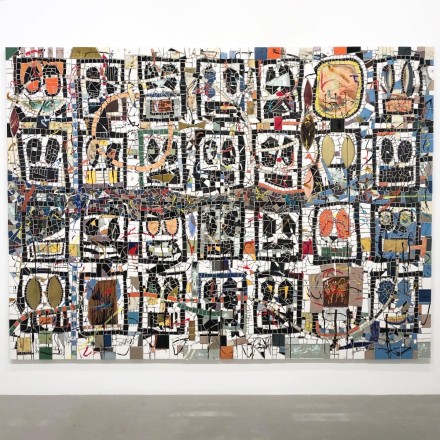 The show ultimately arrives at the final room, a 16mm film depicting two black male hikers — one ascending a mountain, another descending — who encounter each other as their paths cross. Sharing a moment of dance on the mountain, Johnson’s choreography draws from the language of the modern black experience. Examining movements like “when a black man is walking past a police officer,” the artist’s work seems to make the anxiety depicted elsewhere into a moment of puncturing clarity.

This entry was posted on Wednesday, January 8th, 2020 at 12:59 pm and is filed under Art News, Featured Post, Show. You can follow any responses to this entry through the RSS 2.0 feed. You can leave a response, or trackback from your own site.