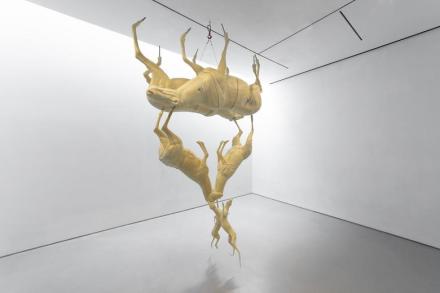 Welcoming Bruce Nauman back to New York City as the artist prepares to open his retrospective survey a the Tate Modern this month, Sperone Westwater’s SoHo Gallery plays home to a series of imaginative, surreal sculptures.  Marking his thirteenth solo at the gallery, his first 45 years ago in 1976, the show presents a set of new sculptures, underscoring the artist’s continued practice across a wide range of diverse mediums, including his own body, language, sound, film, video, neon, holograms and 3D technology. Once again reflecting on the perceptions, preconceptions and contradictions which characterize our existence in the world, the series of works on view underscores Nauman’s capacity to expand and elaborate on the capacities of art in the 21st Century. 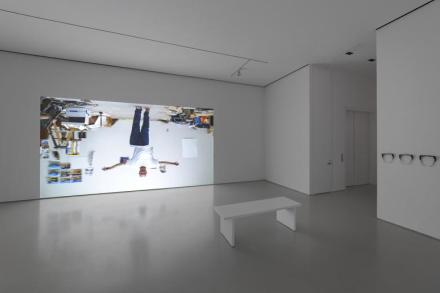 On view in the galleries, Walking a Line, (2019), references Nauman’s performances in his studio dating back to 1968-69, specifically Walk with Contrapposto, and the more recent Contrapposto Studies of 2015/2016. In Walking a Line, rather than placing his hands behind his head, he extends his arms out to the side horizontally and proceeds in a straight line like a tightrope walker trying to maintain his balance. Rendered as a 3D projection and split horizontally with the timing of the two segments out of sync, the video draws heavily on the human mind’s need for balanced images and coherent signs to maintain a sense of understanding, here creating the feeling of an even more tenuous balance. The resulting work addresses stability and a search for equilibrium in both the interior landscape of the body and its relationship to the external environment of the larger world. 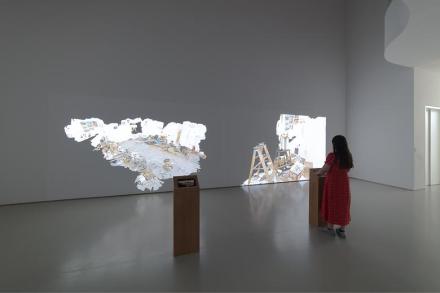 Another work, Nature Morte (2020), focuses on Nauman’s long relationship to his own studio, a variation on his four unique multi-projection videos, Mapping the Studio (2001).  Three viewing stations, each consisting of an iPad linked to a wall-sized projection, provide an interactive exploration of the 3D studio space.  Only now the artist is absent, and the participant becomes performer as he/she manipulates the large scale video projections on an iPad using touch control. The participant is free to navigate anywhere throughout the space, selecting broad vistas or individual objects. Using a hand-held 3D scanner, Nauman recorded hundreds of images that allow participants to select an object and locate close-up anything found there, and further reorient the image to see an object from above and below, and at times inside-out. The resulting mobility intensifies the experience of the viewer/performer.  Presenting a static, but immersive re-creation of his studio space, Nauman’s pieces once again play at the tenuous lines between the body and space, perception and physical material.

Taking these modes as an entry point for broader questions of understanding and form in modernity, Nauman’s show this month shows an artist continuing to innovate and evolve. 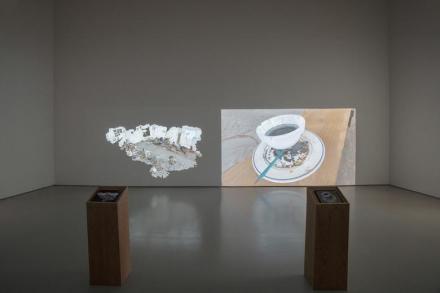 This entry was posted on Friday, October 2nd, 2020 at 1:21 pm and is filed under Art News, Featured Post, Show. You can follow any responses to this entry through the RSS 2.0 feed. You can leave a response, or trackback from your own site.