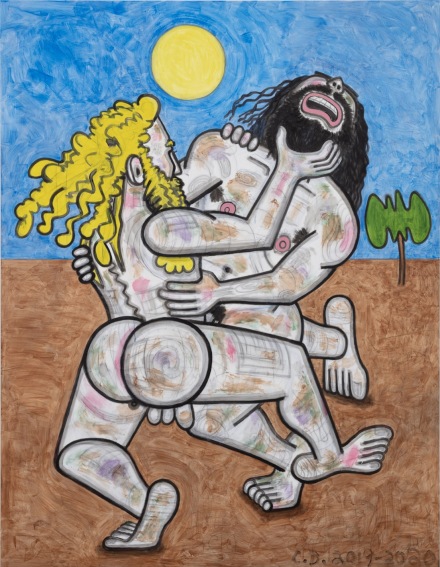 Marking a continuation and expansion of exploration of visceral states and fluid body movements across a series of new canvases, Carroll Dunham returns to Gladstone Gallery this winter, exhibiting a group of “wrestlers,” engaged in physical struggle. Dunham’s newest groups of wrestling matches are set amidst barren landscapes, deserted for all but one single tree, wherein the aggressive men are locked into differing moments of struggle. Employing formal techniques developed throughout his career, the works exemplify Dunham’s unique ability to continually recontextualize his distinct visual language through new and recurring modes of art making. 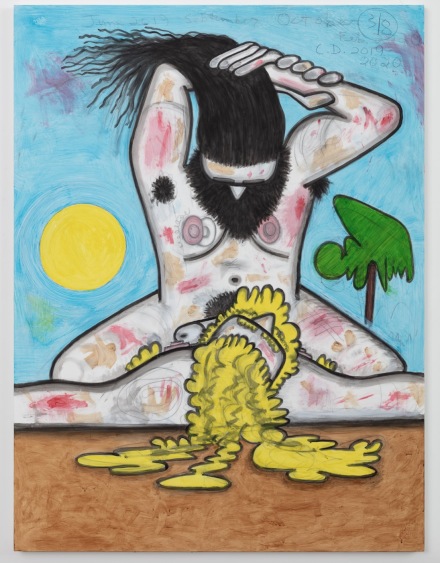 Carroll Dunham, Winners and Losers (3/8) (2019-2020), via Gladstone
The exhibition’s first group of paintings, the series Winners and Losers, is organized around an self-reinforcing visual system, whereby a set of formal parameters informs how the figures move and interact with one another, and then allow a series of carefully structured variations and elaborations.  Always depicting the conclusion of a struggle, these scenes depict the winners, mounted atop the losers, each time varying the combatant’s emotional states.  Triumph, anguish, and meditative poise dart across the faces of each character, some are triumphant, emphasized by the overlapping layers of paint and pencil applied across the surfaces of their bodies.  Taken in as a whole, the series both balances and juxtaposes the straightforward logic of a system of formal variables against the physical and psychological mayhem, much in the same way that a physical confrontation boils down a series of complex variables to a single outcome. 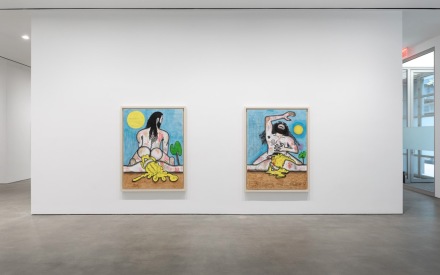 Carroll Dunham at Gladstone, via Gladstone
Other groups of interconnected paintings – Big Men and Big Men Up Close – document the dramatic actions of Dunham’s protagonists mid-fight. In the large-scale Big Men works, Dunham portrays the distress and helplessness of one man at the hands of a stronger opponent. These struggles are memorialized through the impactful scale, as well as the confident, bold outlining of the figures. The acrobatic maneuvers that force their bodies to contort within the boundaries of the picture plane further intensify the dynamism of these complex confrontations. This vitality carries into the series Big Men Up Close, where Dunham tightly crops these fights into smaller, square-format vignettes, reminiscent of earlier bodies of work, such as Edge of His World (2002- 03) and Dead Space (2005). 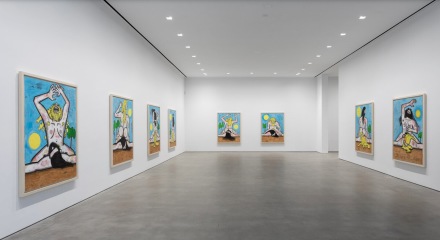 Carroll Dunham at Gladstone, via Gladstone
Pushing the figures to the forefront, these works offer a more intimate view of the protagonists, and Dunham renders the stoicism and turmoil of their expressions and choreographies with tremendous detail and emotion. Throughout the works for this exhibition, Dunham demonstrates his fascination and uncanny ability to play with scale, orientation, and composition in order to create vivid, psychologically challenging works that encapsulate the complexity of his subjects’ worlds.
The show closes January 9th, 2021.
– C. Reinhardt
Read more:
Carroll Dunham at Gladstone [Exhibition Page]

This entry was posted on Friday, December 18th, 2020 at 1:25 pm and is filed under Art News, Featured Post, Show. You can follow any responses to this entry through the RSS 2.0 feed. You can leave a response, or trackback from your own site.