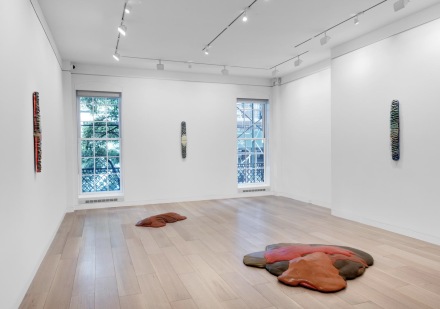 Closing today at Cheim & Read and previously on view through December 3rd at Ortuzar Projects, Lynda Benglis’s early work gets a renewed perspective, exploring the artist’s dense material innovations and explorations of the body in relation to sculpture. Compiling a range of works that have proved crucial to the development of Lynda Benglis’s practice during her first decade in New York, the show spans three separate locations, offering an impressive and expansive look at the artist’s work. On at Cheim & Read’s uptown exhibition space, a series of lozenge-shaped wax paintings are juxtaposed with Benglis’s latex and polyurethane pours, while one floor up and the Ortuzar viewing room, one can view a selection of gilded wall sculptures inspired by the caryatids from the porch of the Erechtheion at the Acropolis in Athens. Sparkle and metallized knot sculptures, including the multi-part installation North, South, East, West, 1976 – last shown in New York at a 1981 Whitney Museum exhibition – are on view at Ortuzar Projects on White Street in Tribeca. 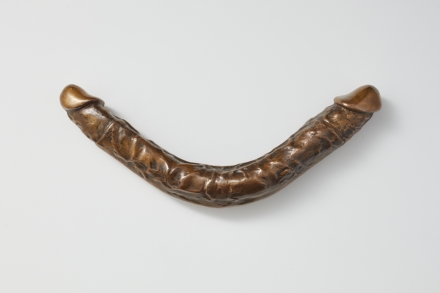 At Cheim & Read, the body of works draw a distinct line towards sexually suggestive movement and the liquid processes that render them.  Made as the artist moved into the 1970’s, the pieces are lushly colored, sculptural build-ups of pigmented wax, which transform their wood and masonite supports into ambisexual totems, the accumulated gestures and pressings of material onto its surface moving between a sensual reverie with her work, and an alien facade that brings to mind a coral-like encrustations.  By contrast, her latex pours lampoon the machismo of her Ab-Ex contemporaries, lumpen objects charged with a sense of humor and critique. 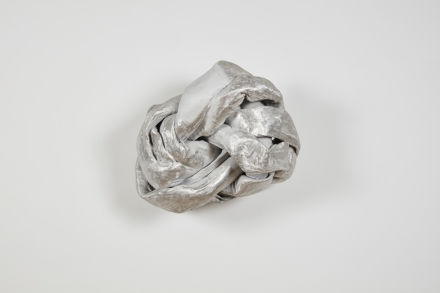 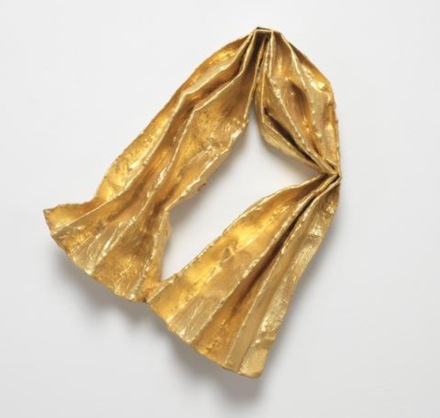 At the two Ortuzar spaces, one can view similarly comical critiques of masculinity and contemporary mores, particularly in works like Flounce or Smile, deliberately sexualized icons that charge her work with the sense of inter-gender dynamics that make her work so starkly potent. Knot sculptures made out of cotton bunting treated with glitter, paint, or sprayed metals create an interior and an exterior, like a body, and reference the long limbs of a figure. The four elements, sprayed in zinc, steel, and tin that make up North South East West (1976) explode in an ecstatically choreographed configuration across the wall. In these works, Benglis exhibits a surface restraint, employing mostly monochrome, while ratcheting up the complexity of the forms. These are Minimalist sculptures gone haywire, looping into and around themselves, evoking the convolutions of lived experience rather than the purity of theoretical thought.

The works throughout offer a striking look at an artist whose practice in critique and her investigations of material politics underscore her work, and have kept her work increasingly vital in the current day. 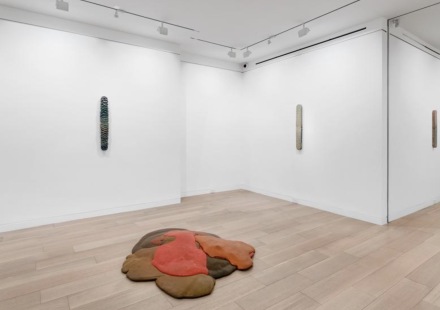 This entry was posted on Wednesday, December 23rd, 2020 at 1:35 pm and is filed under Art News, Featured Post, Show. You can follow any responses to this entry through the RSS 2.0 feed. You can leave a response, or trackback from your own site.