Currently on view at Hauser & Wirth New York, the gallery is presenting a dynamic show of rarely seen works by American artist Jack Whitte, focusing in particular on the artist’s practice from 1991 through 2000, a period of intense experimentation during which, deeply affected by tumultuous world events, he strove to incorporate a full emotional spectrum into his work. Blurring the boundaries between sculpture and painting, and between the studio and the world, the multidimensional works on view combine geometric abstraction and found objects to mine spiritual and metaphysical thematic veins. 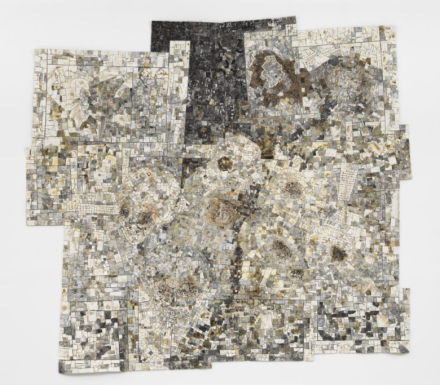 The show finds an emotive and powerful body of works spread throughout the galleries, among them powerful and elegiac works like Whitten’s Totem and Mask series of paintings, explorations of African sculpture that dovetails exceptionally with his use of intricate materials like xacrylic, recycled glass, plywood and eggshells, and treats historical figures as mythological figureheads or shared family.  Mask II: For Ronald Brown (1996), for instance, memorializes Whitten recalls the Commerce Secretary in President Bill Clinton’s cabinet, whose untimely death in a plane crash was mourned in the Black community across America. Whitten’s homage to Brown contains layers of reference imagery forming a triangle, reflecting the symbiotic relationship between spirituality, thought, and syntax. For Whitten, honoring the contributions by important Black figures was a recurrent theme in his work, as seen with his series Black Monolith, also on view. 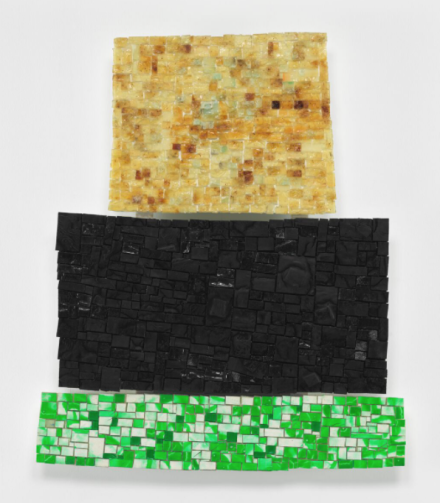 The Black Monolith series began in the mid 1980’s, in which Whitten honored various African American intellectuals from the 20th and 21st century. These laid the groundwork for the subsequent Totem and Mask works. In the context of the events of 2020, these works have acquired added significance and portent. Totem 2000 IV: For Amadou Diallo (2000) pays tribute to the young, unarmed Guinean immigrant whose wrongful death at the hands of four New York City plainclothes police officers ignited outrage.  The layered and reflective surfaces of many of the works on view are more akin to relief sculpture than conventional painting, and the energy that the works exude is palpable. 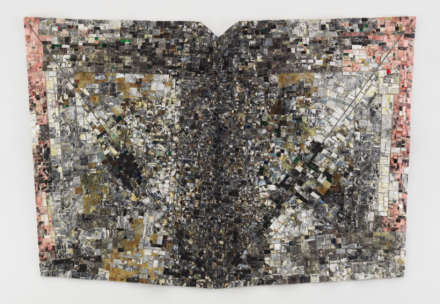 Together, the works on view reveal an artist of extraordinary sensitivity, capable of imbuing modernist abstraction with the vibrations of historical narratives and histories and bringing the spiritual and material realms into alignment.

The show is on view through January 23rd.

This entry was posted on Tuesday, January 12th, 2021 at 4:20 pm and is filed under Art News, Featured Post, Show. You can follow any responses to this entry through the RSS 2.0 feed. You can leave a response, or trackback from your own site.