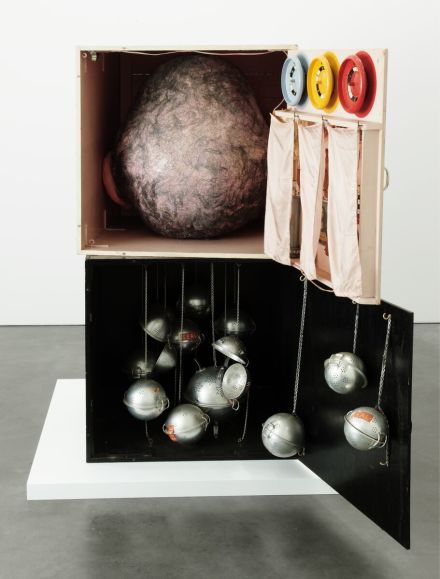 In a wide-ranging practice spanning four decades, postwar Japanese artist Tetsumi Kudo explored the effects of mass consumerism, the rise of technology, and ecological degradation on post-war society through satirical, critical, elaborately detailed and meticulously constructed environments that continue to exert a powerful influence on artists today. This framing serves as the central conceit of Metamorphosis, the artist’s first exhibition at Hauser & Wirth New York. Drawing in particular on the artist’s interest in transformation as a mode of personal and collective evolution, the show frames his work as a seeking of a way beyond the traps of Western Humanism, and exploring just how one might imagine a world beyond that of the modern. 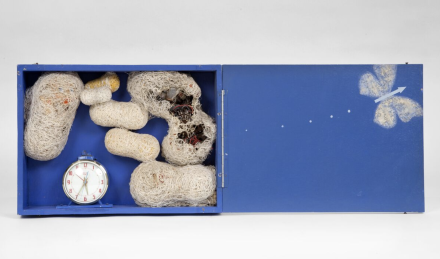 The show brings together 20 significant works created in the decade following Kudo’s move from Japan to Paris in 1962, including a series of highlights from the artist’s signature container works. These cubes, cages, buckets, and terrariums contain elaborate constructed tableaux, body parts and consumer goods mingling in ghostly, often disturbing arrangements that seem to hint at a space beyond the landscape of modern capital. Kudo’s aesthetics and philosophical considerations were influenced by his early interests in biology, set theory, astrophysics, quantum mechanics, and popular culture, and were inflected by post war debates in Japan and Europe about societal evolution after World War II. Kudo’s micro-worlds cultivate an uncanny fusing of imagery derived from the artist’s highly personal visual lexicon that includes eyeballs, crawling penises, cacti, plastic flowers, pills, transistors and thermometers. 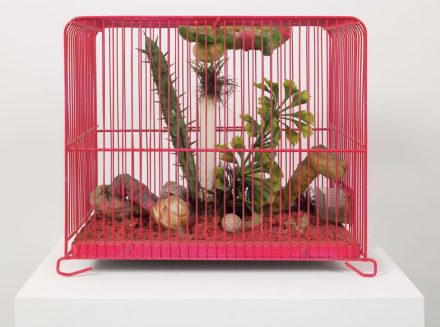 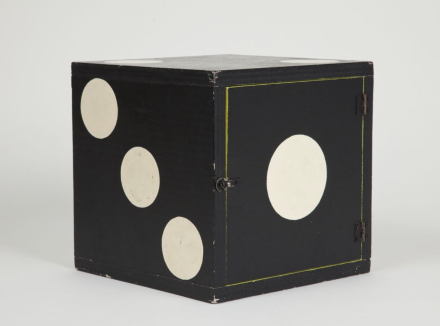 Throughout, the artist’s works confront the body in capitalism, posing parts and pieces in a state of suspended degradation. Kudo intended his seemingly grotesque yet playful scenes as both models of contemporary life and provocations meant to encourage viewers to confront and put aside the confines of ego and the values of consumerism and to understand themselves instead as part of an integrated and intricate cosmos in which nature, technology, and humanity influenced each other in a system he dubbed the New Ecology. Metamorphosis is posted as a result on several levels: as a biological process, a social phenomenon and as a metaphor for the spiritual evolution the artist seems to see as a necessary endgame. However, the artist’s work seems to often obfuscate whether this is a post-apocalyptic framing or one of evolutionary triumph, perhaps only relying on the notion of an escape velocity, and deprioritizing its moral imperative; the ends don’t justify the means so much as emphasize the requirements of those ends themselves.

Kudo’s work is on view through July 30th. 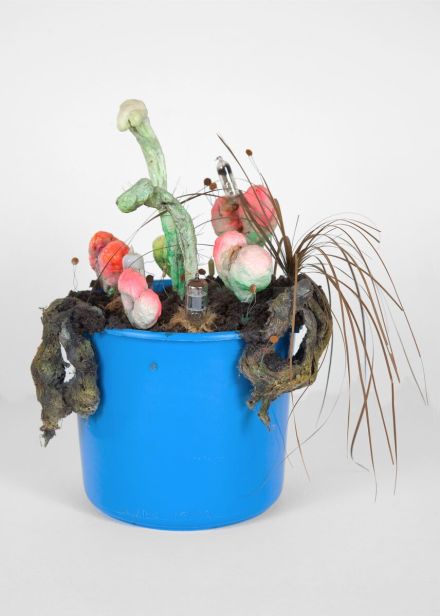 Tetsumi Kudo, Cultivation of Nature & People Who Are Looking at It (1972), via Hauser & Wirth

This entry was posted on Wednesday, July 28th, 2021 at 12:09 pm and is filed under Art News, Featured Post, Show. You can follow any responses to this entry through the RSS 2.0 feed. You can leave a response, or trackback from your own site.