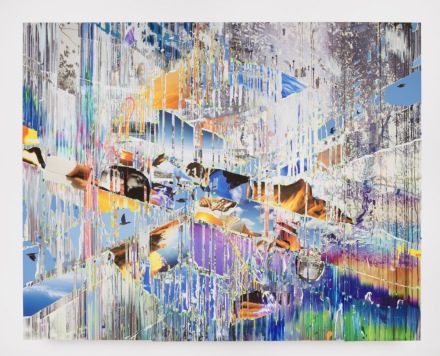 Sarah Sze brings a new body of works to Victoria Miro in London this week, continuing her meticulous and studied treatment of the painted canvas across a selection of densely layered new works. The show, which opened this past month, brings an expanded sense of Sze’s work as a painter, and an elaboration of her already well-documented interest in intense visual fields, using her concept of the image in constant generation, evolution and degradation as a centerpiece of this show. 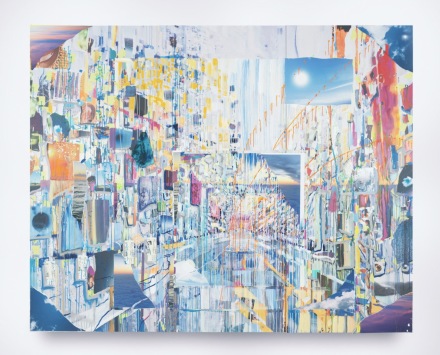 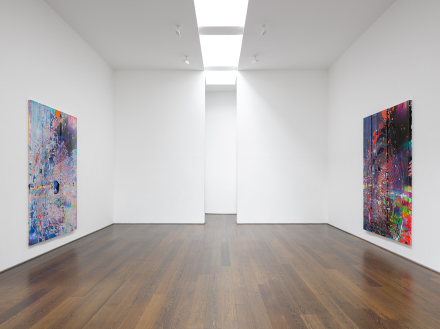 In Sze’s new paintings, scaled to Victoria Miro’s Gallery II space, the artist incorporates a wealth of painted and collaged elements and traces of multiple image-making mediums, laying bare the narrative of the studio and the developmental arcs that occur within and between the works. In recent years the American artist has returned to painting, the medium in which she first trained. These new wall-based works continue the artist’s decades-long exploration of the ways in which the proliferation of images – printed in magazines and newspapers, gleaned from the Web and television, intercepted from outer space, and ultimately imprinted on our conscious and unconscious selves – fundamentally changes our relationship to physical objects, memories, and time. Flickers of collaged elements negotiate with stiff lines or drips of paint, swirling fields of imagery that create a dizzying sense of a site in flux.  The paintings are conceived in pairs, revealing two stages of a related image. Collaged and painted elements repeated, mirrored or flipped back and forth between the pairs of works, along with certain compositional devices and thematic strategies, serve to impress upon us a family resemblance, while a traditional understanding of lineage – the idea of beginning and conclusion, original and copy, or of one work preceding or succeeding another sequentially – is deliberately suspended in favour of a sense of continual cross-pollination. 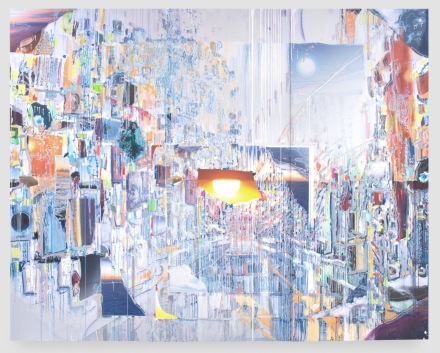 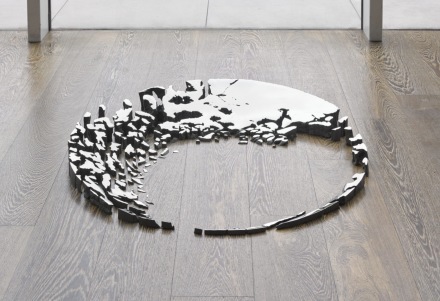 How images are produced, collected, appropriated and developed to create other images, and how, at the same time, they degrade, or are held, stored or transmitted at different resolutions, sits. The works converse across the gallery – each registering as a stage in the life of a painting, a summation of thoughts, impulses and decisions of a work’s creation up to that point. Tracing her participation as both a cognitive and physical gesture, Sze’s works are a striking meditation on the space and site of the artwork, especially when the artist treats each piece as an open framework for data to flow through.

This entry was posted on Tuesday, November 2nd, 2021 at 12:00 pm and is filed under Art News, Featured Post, Show. You can follow any responses to this entry through the RSS 2.0 feed. You can leave a response, or trackback from your own site.