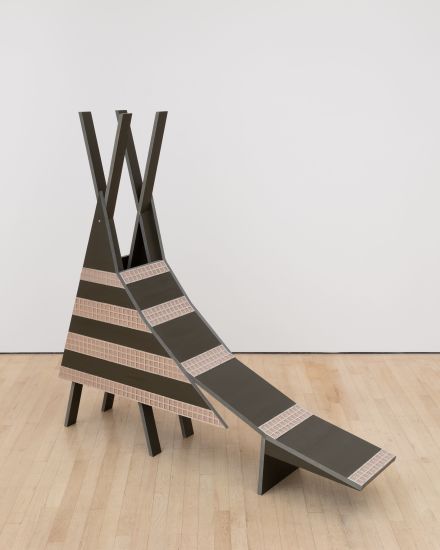 Currently on at JTT Gallery in New York, Chicago-based artist Diane Simpson marks her second show at the gallery with Point of View, a show drawing on a range of architectural sources, as well as her own personal archive of drawings from the early 1980s to render a series of unique objects mixing a fanciful exploration of reality alongside conceptual operations. 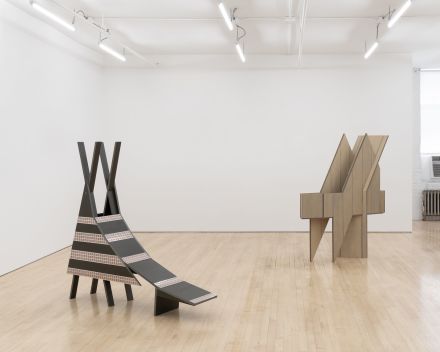 Architecture has long been a source of inspiration for Simpson’s constructions, serving to inform everything from her drawings and prints in the early 1970s through her ongoing costume forms, often drawing in particular on the language and materials of the Art Deco period, and other experimental architectural styles, spread across the Chicago cityscape. Using this language in exchange with negotiations of scale and form, the sources  range in style and geographical origin from Art Nouveau facades in Prague and Leipzig, Germany, Shinto shrines in Ise, Japan, the former Women’s City Club in St. Paul, MN, New York City townhouse windows and Art Deco fixtures in Vienna. Most were photographed by the artist, and each selected with an eye towards their formal qualities including pattern, shape, and the relationship between structural parts. 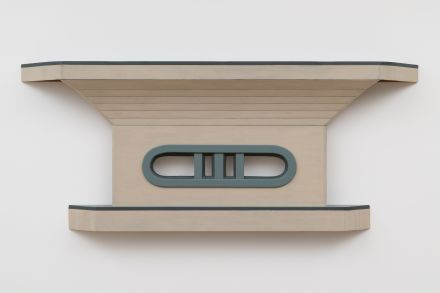 Simpson’s translations of these architectural features vary in degrees of abstraction from the original photographic source, reducing ornamental accents while amplifying curves and geometric forms, material qualities and formal contrasts. In Bannister (Vienna) for example, the work which most closely resembles its source, floating gridded panels and their connective hardware accentuate its oblique angles. And in Transom (with Tassels) the decorative facade is rendered at, calling attention to its ovular portal and sloping curves which the artist carefully constructed from MDF using a series of bevel cuts. Attention to the surface detail balances a formal geometry in Grained Chimney where Simpson has traced the grain of its wooden planes in graphite, throwing the jagged, looping natural pattern of the wood into high relief. 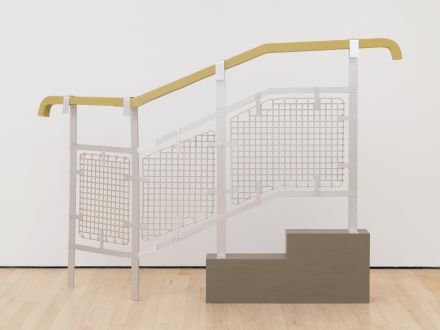 Much has been written about Simpson’s process of transcribing her photographic sources into technical drawings on graph paper using axonometric projection. These drawings become the basis for her final sculptures which often realize the two-dimensional perspectival distortions in three dimensions. Taking the interrogation and re-contextualization of her sources as a central tenet in her work, the show makes for an engaging movement through the history of architecture.

This entry was posted on Friday, November 12th, 2021 at 12:32 pm and is filed under Art News, Featured Post, Show. You can follow any responses to this entry through the RSS 2.0 feed. You can leave a response, or trackback from your own site.