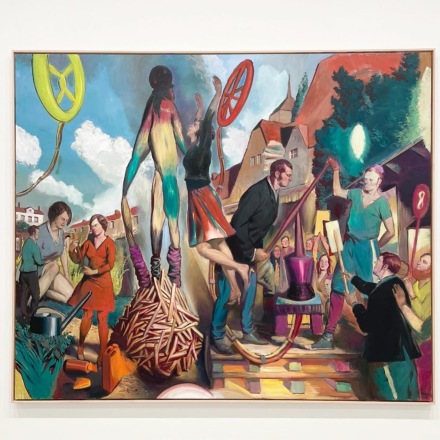 Currently on at David Zwirner’s New York exhibition space, artist Neo Rauch has brought forth a body of new works unified under the title The Signpost, a set of new paintings that mark his first show in New York since 2014. Known for his rich color palette and dreamy, surreal motifs, the artist’s work makes a striking return to the city. 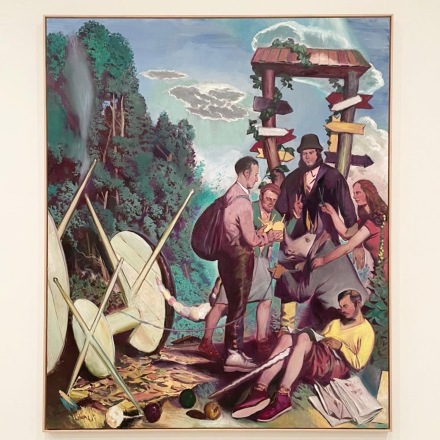 At once realistic and familiar, enigmatic and bizarre, Rauch’s paintings often hint at broader narratives and histories, connecting with both traditions of painterly realism while undergoing a sort of macabre transformation. Ghoulish forms mingle with scenes of antiquity, space-age technology mingles with Renaissance signifiers, always presenting figures bound together in tight compositions that recall large swaths of art history while refusing to ever rest firmly in a single tradition, and always functioning as a self-contained system. 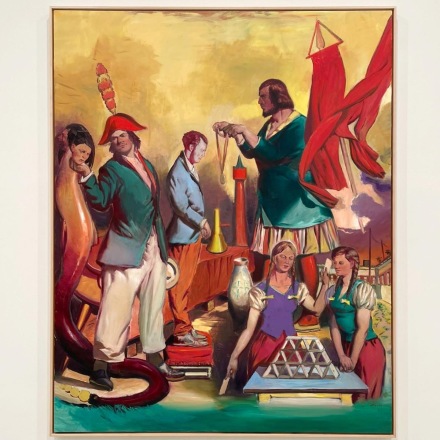 In this new set of works, Rauch continues this process, with a set of scenes that continue the ambiguity and compositional density that pervades so much of his work. Several of the new works feature prominently positioned signposts, from whence the exhibition gets its title, with arrows and directional markers pointing in myriad directions, seemingly alluding to the disorientation of contemporary life, while Wegweiser, which literally translates as “signpost” in English, shows several individuals clustered around a signpost bartering with each other. One figure holds bulbous alien-seeming forms with protruding antennae, which mimic the antennae of several larger forms that appear adjacent to the group. These retro-futurist objects have become motifs in many of the artist’s paintings, an example of how forms, figures, and even certain stylistic flourishes exist as personal iconography that Rauch frequently draws upon and reincorporates into his work. Subverting a reading of the work as both a yearning for a traditionalist past nor a future-first allegory, his pieces instead confuse and confound past and future to arrive at a fittingly indeterminate now.

Unifying these tropes and frameworks through his pieces, Rauch’s work is on view through December 18th.

This entry was posted on Friday, November 12th, 2021 at 11:02 am and is filed under Art News, Featured Post, Show. You can follow any responses to this entry through the RSS 2.0 feed. You can leave a response, or trackback from your own site.