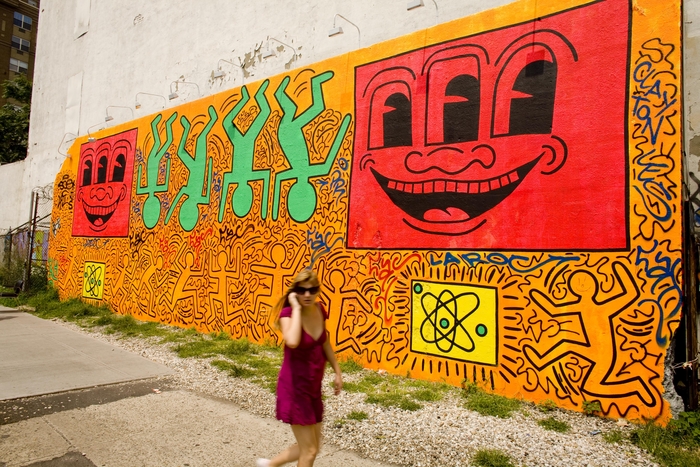 A week ago, Angel Ortiz, an artist known as LA II added his own touches to the Keith Haring tribute mural, covered in April by AO here, that has stood at Bowery and Houston streets since April. With the help of artist and gallerist, Clayton Patterson, Mr. Ortiz filled in blank spaces on the public mural, which he deemed fair game. It is yet another chapter in a 20 year long legal dispute with The Haring Foundation. He claims the Foundation has failed to credit collaborative work he did as an underage teenager with Haring in the early to mid eighties.

“We’re proud to be a partner with our neighbors at Harley-Davidson celebrating their rich heritage and supporting the Muscular Dystrophy Association,” said Mark Ziskind, Miller Genuine Draft brand manager. “These limited-quantity commemorative cans in honor of the anniversary quickly will become collectors items for Harley fans as well as for MGD drinkers across the country.” Harley Davidson riders from across the country will take part in the Reunion Ride, beginning June 3 and ending June 12 in Milwaukee. Cyclists will begin their trips from 10 starting-point cities and follow a predetermined route with designated stops along the way to Milwaukee. go to site muscular dystrophy association

All of Harley-Davidson’s proceeds from the sale of the commemorative cans will go to MDA.

This entry was posted on Friday, August 1st, 2008 at 5:45 pm and is filed under Art News. You can follow any responses to this entry through the RSS 2.0 feed. You can leave a response, or trackback from your own site.