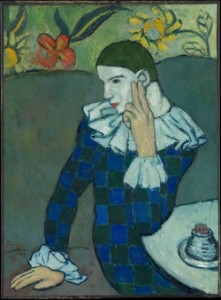 Seated Harlequin, Pablo Picasso, 1901, via the Metropolitan Museum of Art

“Picasso in the Metropolitan Museum of Art” exhibits 300 pieces from 25 donors, including 34 paintings, 58 drawings, a dozen sculptures and ceramics, and 200 prints, all of which come from the Metropolitan’s own repository.  Nearly every Pablo Picasso that the Met has amassed was used to compile this landmark exhibition, with works displayed dating from 1900 to 1968.  The Met is presenting several hundred works on paper that have never been seen by the public.

More text, photos, and related links after the jump. . . 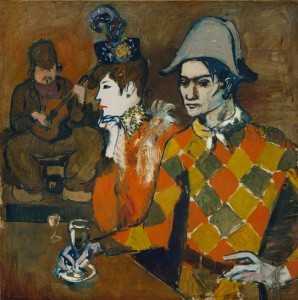 At the Lapin Agile, Pablo Picasso, 1905, via the Metropolitan Museum of Art

The collection displays familiar works such as Seated Harlequin (1901), At the Lapin Agile (1905), Woman in White (1923), The Dreamer (1932), and Dora Maar in an Armchair (1939).  The majority of pieces come from his earlier Blue, Rose, and classical periods.  Notably absent, however, are pieces from Picasso’s Cubist period.  This dearth is explicable by the Met’s conservative foray into modern art: the museum acquired its first Picasso in 1947–a bequest by Gertrude Stein–with the MoMA collection already boasting 82 of his works.  Nonetheless, the Met holds the second most important Picasso collection in the world, and the weightiness of his earlier work serves to dissipate notions that his talents reached a crescendo in the 1910s. 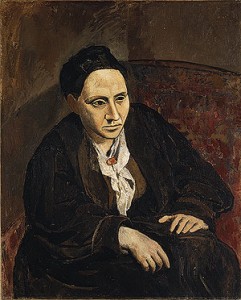 Gertrude Stein, Pablo Picasso, 1906, via the Metropolitan Museum of Art.

In preparation for the exhibition, infrared reflectology and x-ray technology have confirmed the authenticity and physical integrity of each piece.  Such research led to discoveries of numerous, completed paintings underneath finalized canvases, a testament to the Spanish artist’s parsimoniousness and perfectionism alike.  This Met has compiled subsequent information regarding Picasso’s processes, composition, styles, and themes and displays its findings through video and photography exhibited alongside the masterpieces.  Picasso’s The Actor (1903) is also on display, after conservation  necessitated by a tear incurred last January. 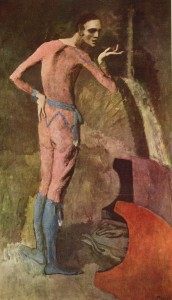 This exhibition and the conjunctive record-breaking expense of Nude, Green Leaves and Bust represent a deliberate end to the recession-tainted auction and benefaction process.  Picasso in the Metropolitan Museum of Art runs concurrently with two other Picasso exhibitions, although the collections are not related.  Curator Gary Tinterow posits: “Perhaps in difficult straits one’s mind leaps to Picasso.”

This entry was posted on Friday, May 21st, 2010 at 1:00 am and is filed under Art News. You can follow any responses to this entry through the RSS 2.0 feed. You can leave a response, or trackback from your own site.