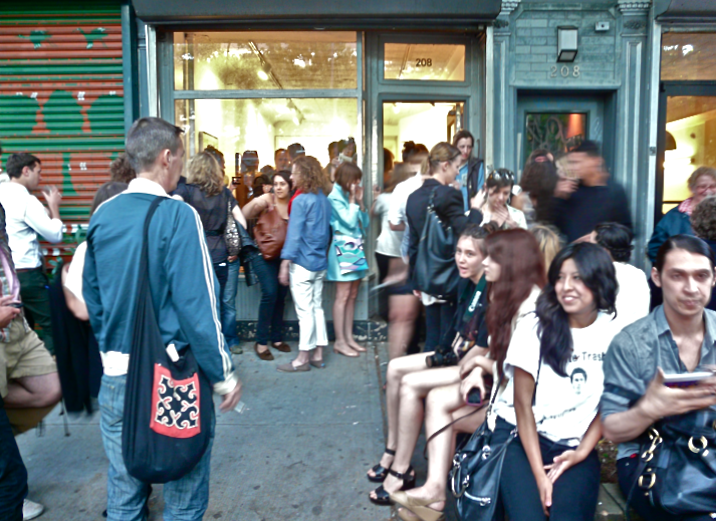 AO was on site June 8th for the opening of “A Ways A Way,” the new exhibition at Half Gallery.  Curated by Meredith Darrow and Devendra Banhart, A Ways A Way offers synoptic views of work by artists Scott Campbell, William Eadon, Kevin Long, Megan Marrin, Keegan McHargue, Fabrizio Moretti, Angeline Rivas, Adam Tullie, and Banhart himself.  Coming from various corners of the artistic field, these men and women form a motley roster of familiar names: in addition to be being creators of fine art, Campbell is a renowned tattoo artist, Eadon is a deisgner, Long skateboards and plays guitar, Moretti is the drummer for The Strokes and Little Joy, Rivas and Tullie co-own Cavern Collection, Banhart is a singer-songwriter, Marrin works in mixed-media, and McHargue choreographs.  In attendance last night were Cynthia Rowley, Kathy Grayson, and a repletion of artists, gallerists, friends, and passerby.  Viewers spilled jocundly onto the surrounding sidewalk, chatting and enjoying a lovely night outside of the diminutive, buzzing gallery.

Text, images, words form the artists, and an interview after the jump…

Fabrizio Moretti exhibits a pencil on paper diptych, Anonymous Portrait, the elegance and detail of which betray The Stroke’s drummer’s art school background.  The piece was sold prior to the opening reception.

Devendra Banhart, one half of the curating team, exhibits a series of gouache and pencil eyes.  A visual artist as well as musician, Banhart studied at the San Francisco Art Institute in 1998.  Banhart’s work has been featured at the San Francisco Museum of Modern Art and the Centre for fine Arts in Brussels. 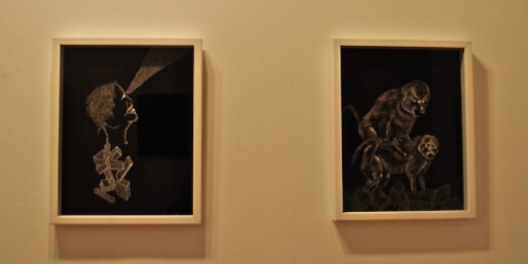 Kevin Long, nicknamed ‘Spanky’ (a cognomen borrowed from the Little Rascals), on his off-time from professional skateboarding, plays guitar for The Goat and The Occasional Others.  His 13 x 10 inch canvas, untitled, is scratchboard and collage on paper. 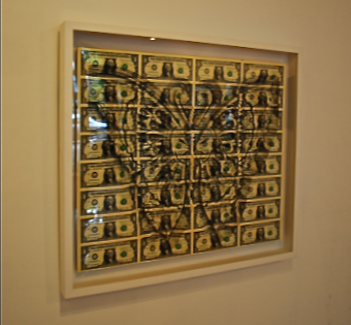 Scott Campbell, creator of a 23 x 27 inch piece in the medium of laser-cut dollar bills, trained for his artistic career by tattooing teenage gang members in 1990’s San Francisco.  He has exhibited in galleries before, at Deitch Projects in New York and O.H.W.O.W. in Miami, selling out the latter venue’s show as a solo artist. 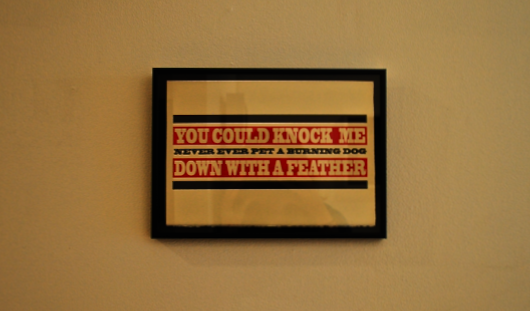 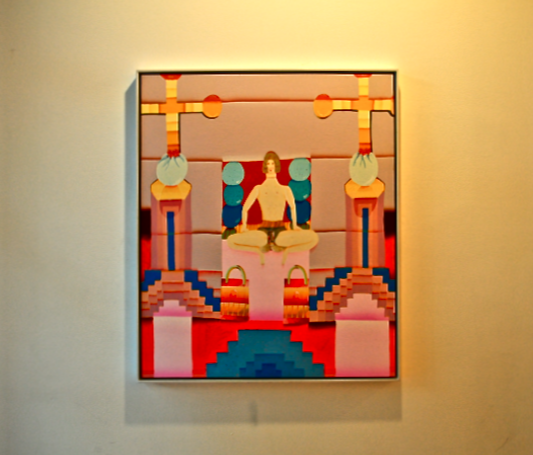 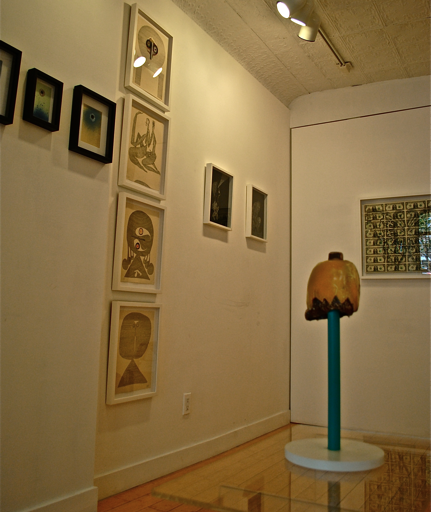 Painter and sometimes-sculptor/ choreographer Keegan McHargue has exhibited his work at Galerie Emmanuel Perrotin in Paris and Metro Picture Gallery, Deitch Projects, and Rivington Arms in New York, as well as at galleries in California, Miami, his native Portland, the UK, Greece, Japan, and Germany.  In addition to McHargue’s painting, the artist presents a sculpture in the medium of chocolate, plastic, Goyard, and cloth. 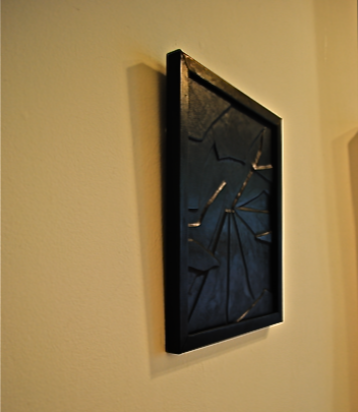 AO caught up with artists Megan Marrin, Adam Tullie, and Angeline Rivas.  Megan Marrin tells us of her untitled leather and glass piece: “It’s part of a series, referencing painting without paint, using leather, glass, and frames.”  Indeed, Marrin’s combination of leather and glass appears to form one entity.  Of the tightness and cohesion of the piece, Marrin tells us: “I use an appropriated form of the French armor-making technique called cuir-bouilli.  I use boiling water and heat to make it look like black paint.” Marrin tells AO that she is excited to be featured tonight alongside designing pair Adam and Angeline, co-founders of Cavern Collection, a favorite label of the artist.  “I used to buy their shirts all the time.  And it’s nice to meet non-New Yorkers,” she says of the Los Angeles-based duo.  “Los Angeles has a lightness to it.  This show has a nice lightness to it.”  Marrin is continuing to work on the series of which this piece is part, revolving around the theme of encapsulations and using elements such as stockings and latex. 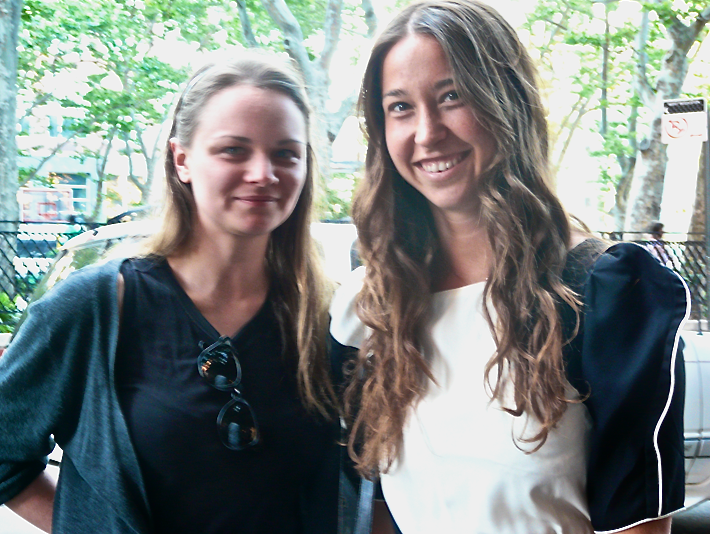 Megan Marrin and Meredith Darrow outside.  Image by ArtObserved. 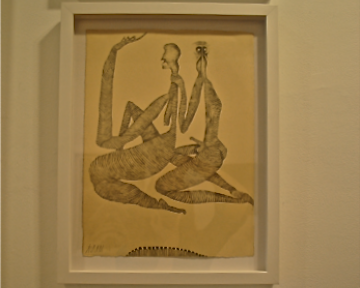 Adam Tullie, business partner of featured artist Angeline Rivas, exhibits pencil and gouache pieces.  He tells AO that he is inspired by “simple shapes, and anything bizarre,” and by favorite artists Amedeo Modigliani, Pablo Picasso, Peter Doig, Chris Ofili, and Mark Rothko. He cites his fine art as the basis for his and Rivas’ label, Cavern Collection: “The whole foundation [of the label] is derived from this, our actual work.  We use hand-drawn patterns and imagery on our clothing.” 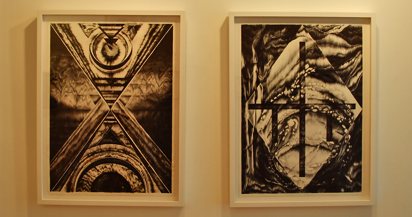 Angeline Rivas has a distinctive style, along with a serious patience for creating exquisitely worked drawings.  “This one took a year to complete,” said Rivas, of one of her ballpoint pen on paper pieces. “But it would probably have taken about one month, if the work wasn’t spread out.”  When asked her medium, Rivas said, “it only took one pen, actually, to complete each piece.  I should sponsor ballpoint pens!  There is definitely a sense of accomplishment when one runs out, eventually.”  Rivas says of her process: “It’s about the evolution of a piece.  I start with a vague idea in pencil.  I don’t have any plan of what will happen.”  Otis-educated Rivas tells AO on opening night that this is her first show at a gallery, “I’m a little nervous, and very excited.” 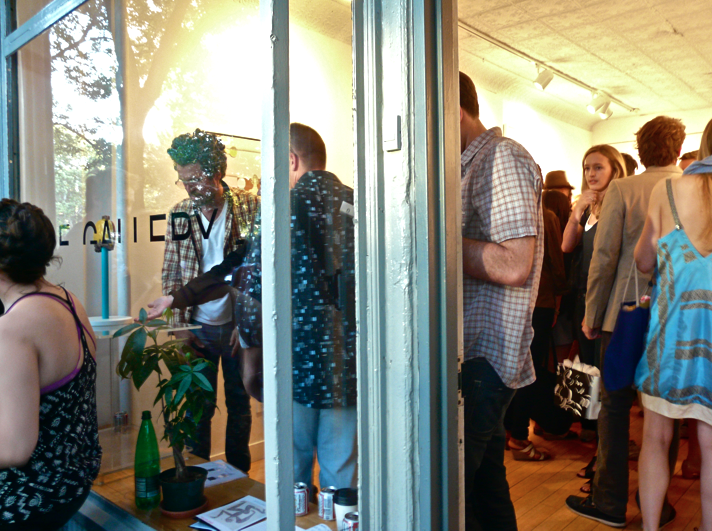 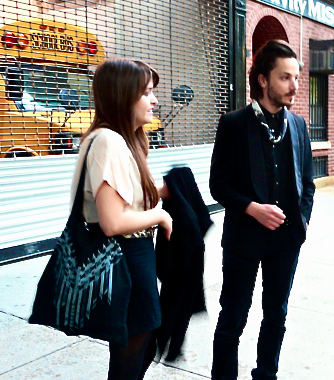 View inside. Bill Powers, co-owner of Half Gallery, prepares for the opening reception. Image by Oskar Proctor for ArtObserved.

AO caught up with independent curator Meredith Darrow, as she began to set up the exhibition with gallery co-owner, Bill Powers.

AO: Do you ever feel nervous right before an opening?

AO: I’ve been wondering about the title of the exhibition: ‘A Ways A Way.’ Often I wonder about titles of things, but rarely do I get the chance to ask.

MD: It was Devendra who thought of the name.  I’m not sure exactly what it means.

AT: Well, it is an awesome title, visually.  Devendra’s big on wordplay.  If you look at his album, What Will We Be, the words are stacked two by two, so a person might also read it as What We Will Be.

AO: How did you, Meredith, and Devendra Banhart come up with the idea to fuse this eclectic group of artists, most of whom do not identify as fine artists primarily?

MD: Bill [Powers] had asked me if I wanted to do a project with him.  Originally I was just going to include Devendra’s work in the show.  Then he had these friends, musicians, designers, who were interested.  It speaks to the fact that fine art has pervaded our entire culture.  Richard Prince designs for Louis Vuitton, Alex Katz has beach towels…

AO: What are your feelings about that?  About artists who work on major commercial projects?

AO: That’s a sanguine way to think of it, especially coming from someone who works in fine arts.

MD: The more the public can be exposed to fine art, and to contemporary fine art, the better.

AO: Everyone featured here tonight is multi-talented.  Is there an inherent connection between the arts, between music and fine art?

MD: It’s about more than music.  It’s about all different sorts of mediums of art.  Conceptually, there’s that creative foundation there.  But like Megan’s [Marrin] work, it takes on different forms when it’s on a canvas, as opposed to when she’s making jewelry.

AO: Is there any person you wish you could have exhibited tonight, in addition to these artists?

MD: Ryan McGinley, but he said no. 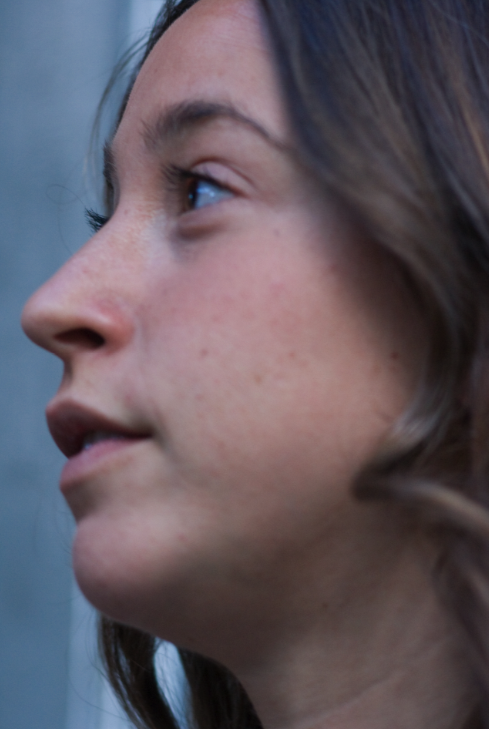 Meredith Darrow chats with friends outside of Half Gallery. Image by Oskar Proctor for ArtObserved.

Bill Powers, co-owner of Half Gallery, gets ready for the opening reception of A Ways A Way. Bill Powers is a Judge of Bravo TV’s Work of Art: The Next Great Artist, which premiered last night. Image by Oskar Proctor for ArtObserved. 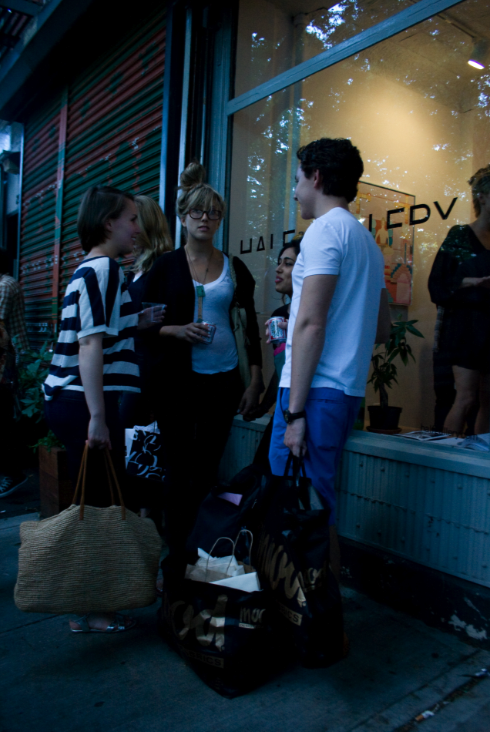 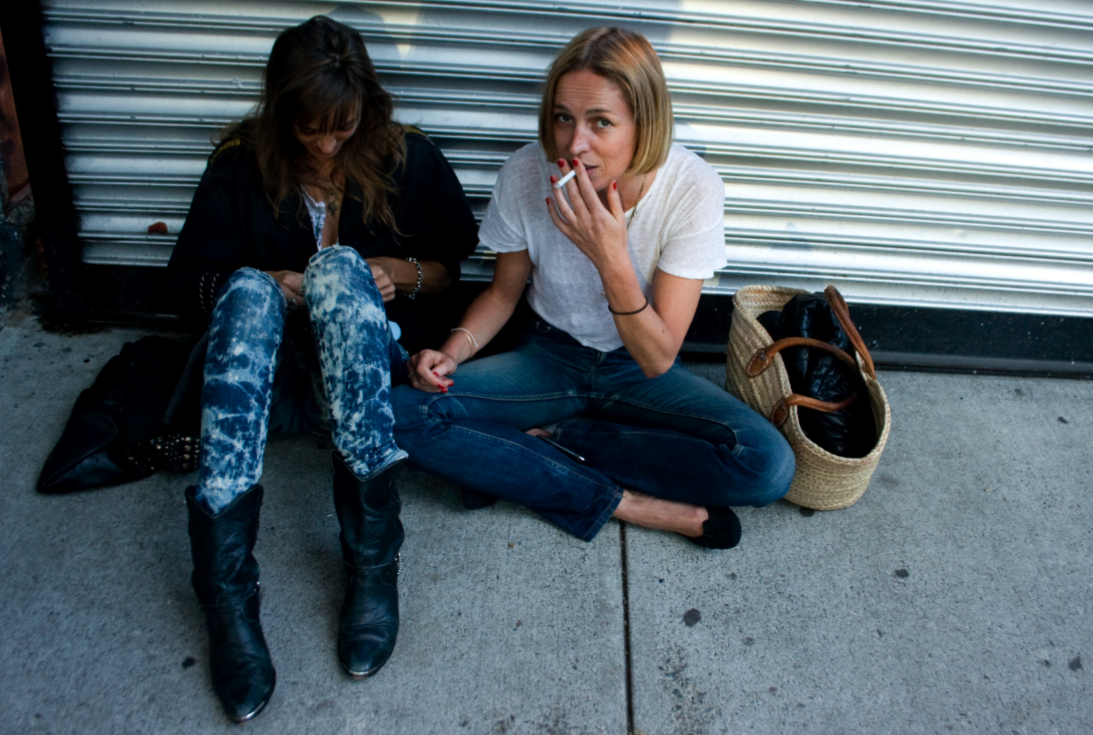 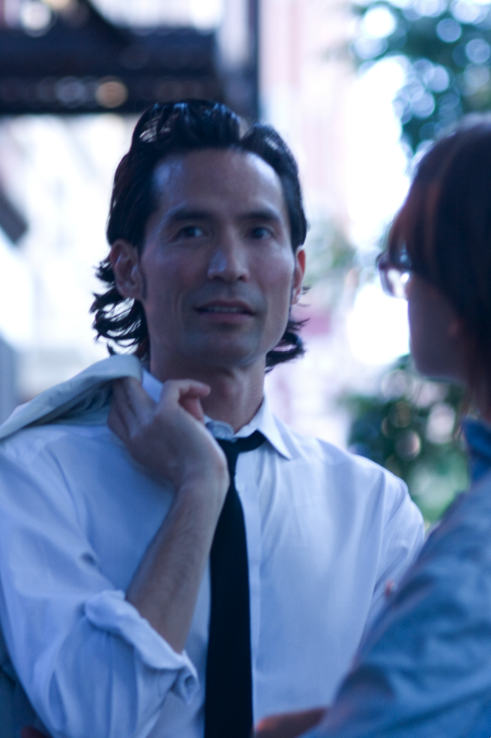 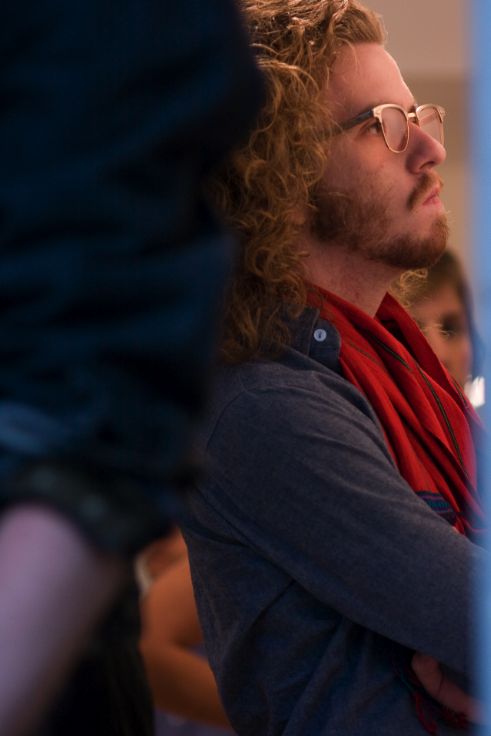 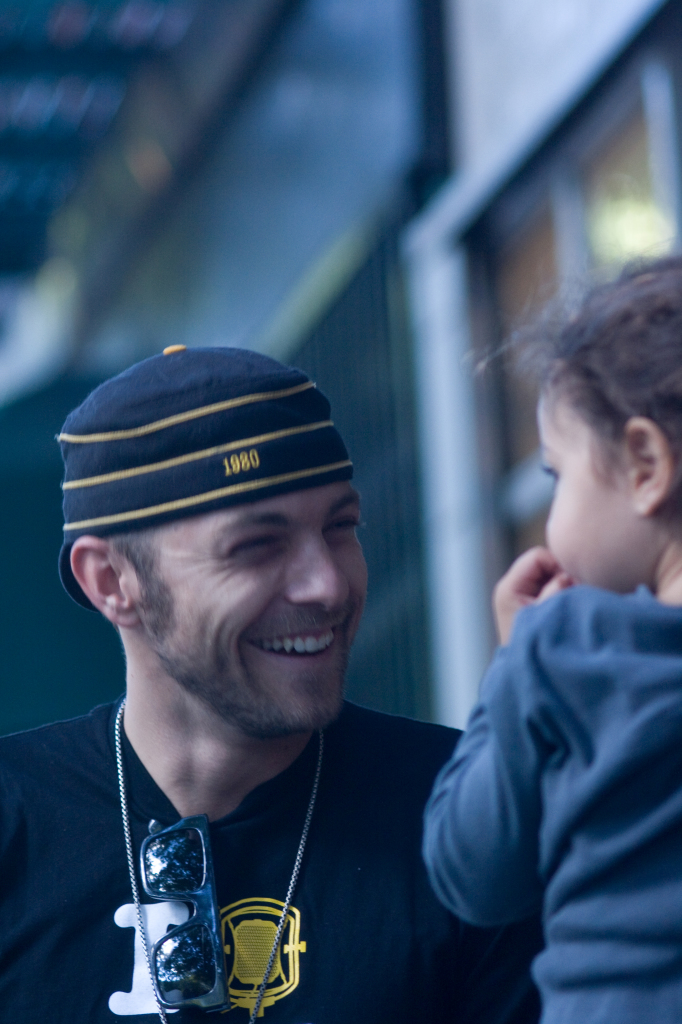 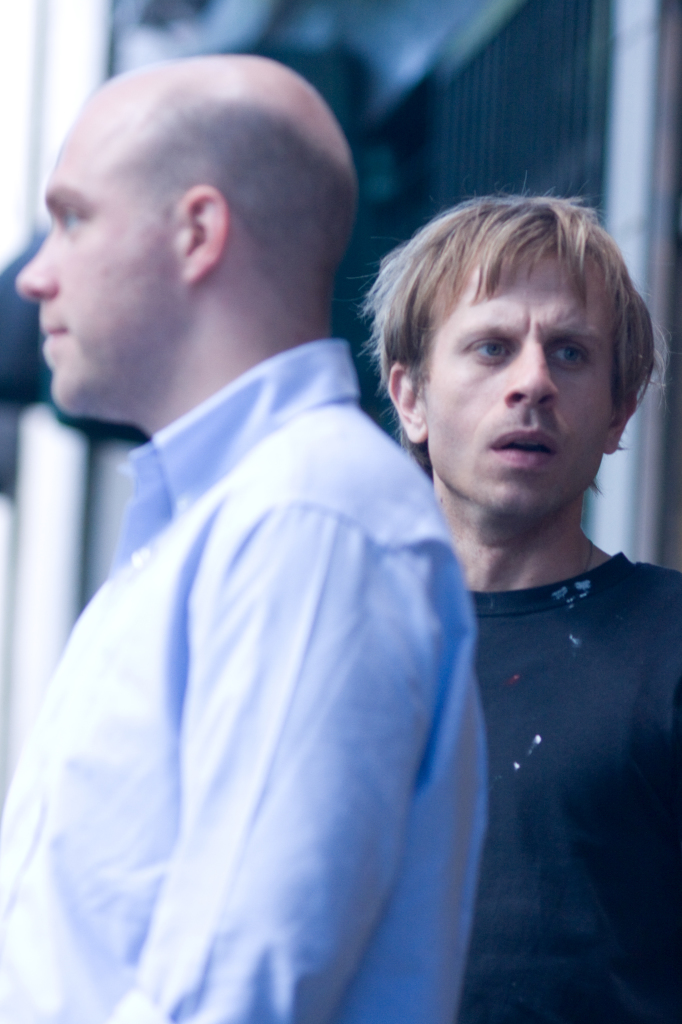 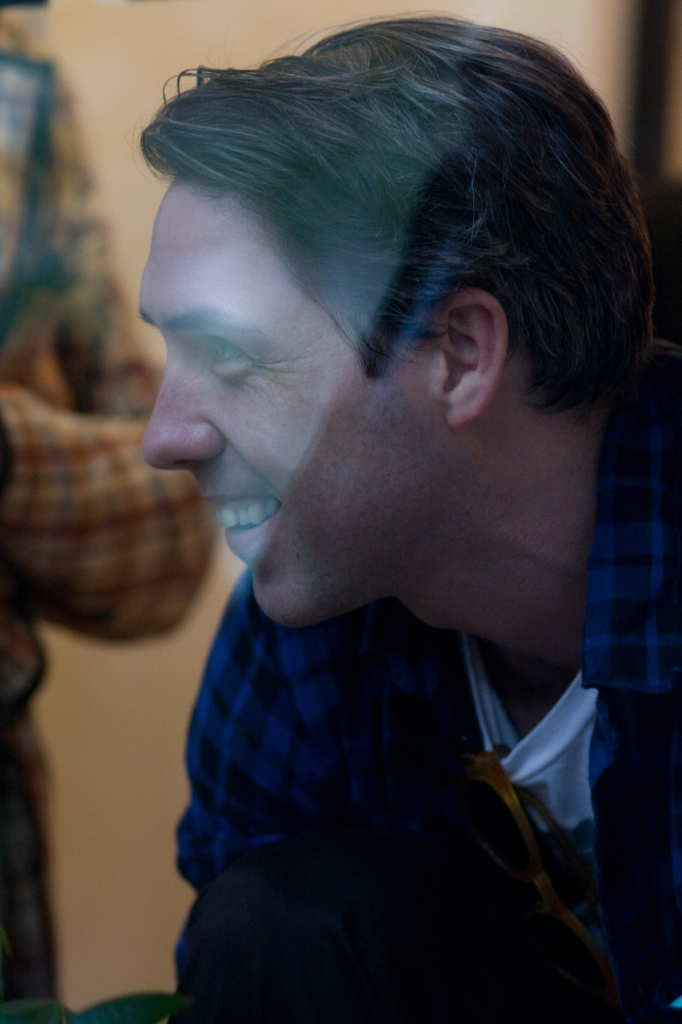 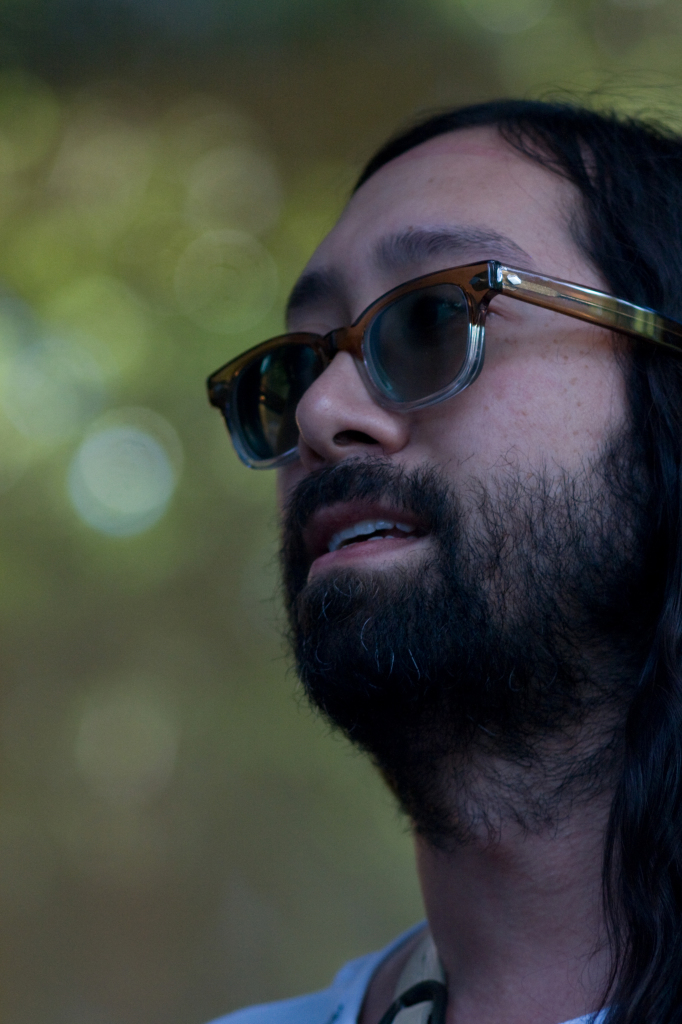 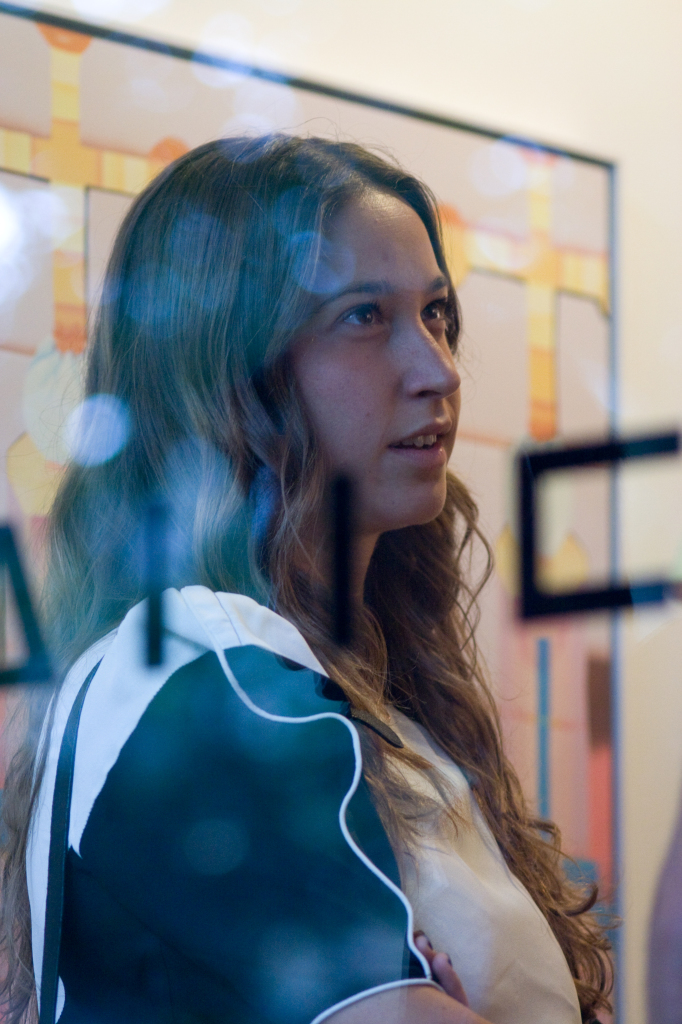 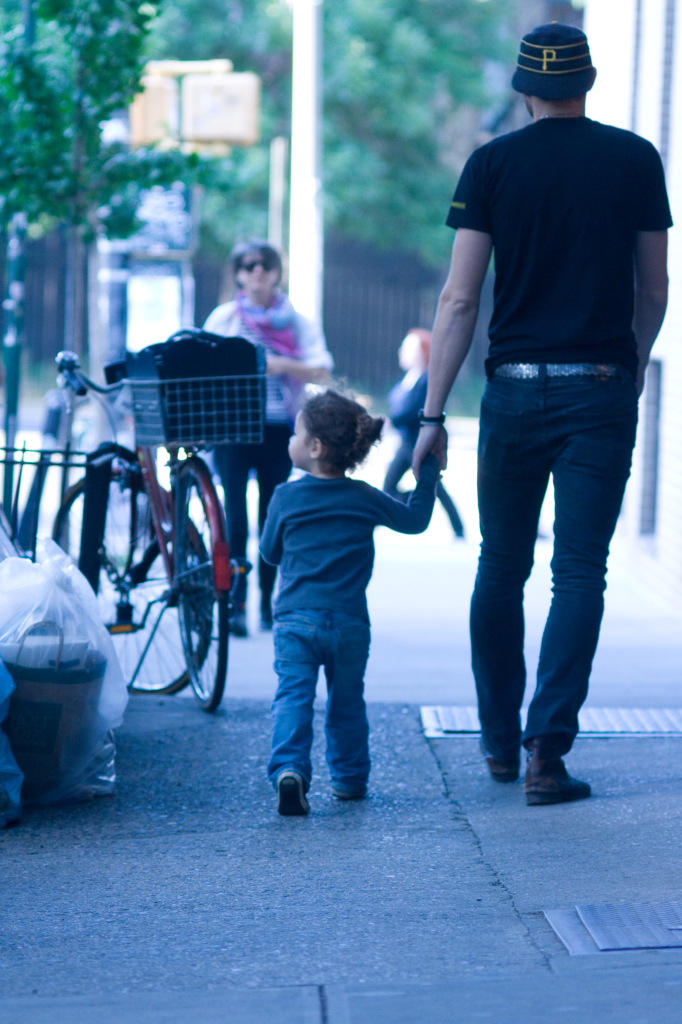 This entry was posted on Thursday, June 10th, 2010 at 2:44 pm and is filed under AO On Site. You can follow any responses to this entry through the RSS 2.0 feed. You can leave a response, or trackback from your own site.